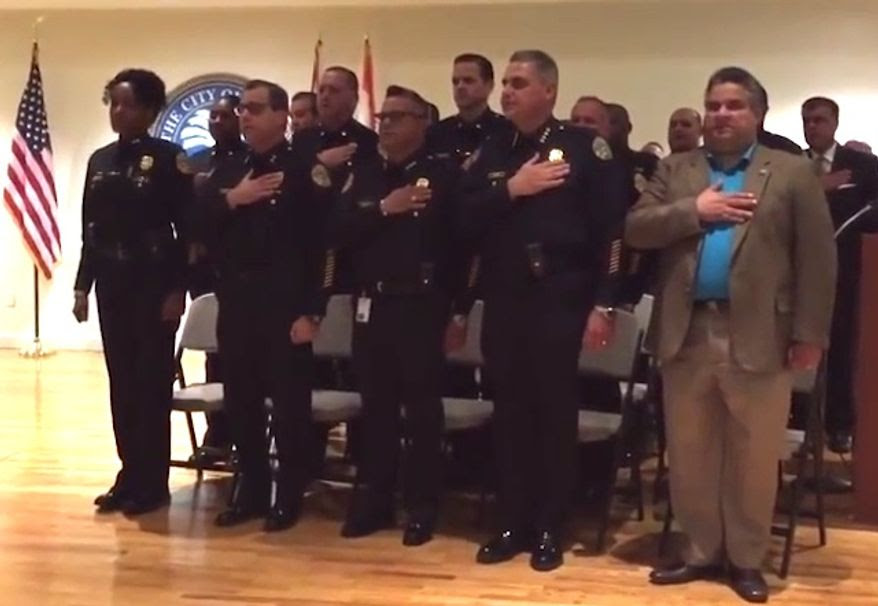 Miami's top police union representative is facing backlash from the city's oldest black police organization after he called for a reprimand against Assistant Chief of Police Anita Najiy (pictured on the far left) and questioned her Muslim faith when she failed to salute the American flag. (YouTube/Miami Herald)

Miami’s top police union representative is facing backlash from the city’s oldest black police organization after he called for a reprimand against Assistant Chief of Police Anita Najiy and questioned her Muslim faith when she failed to salute the American flag.
“I had false hopes that the [Miami Police Department] would address the issue at hand. Assistant Chief Najiy practices in the Muslim faith. The MPD apparently is afraid to address this,” Fraternal Order of Police President Javier Ortiz told reporters Wednesday. “In the United States, you have the right to practice any religion and say whatever you want off-duty. When you’re in your police uniform, you are to be neutral.”
Last Monday, Mr. Ortiz fired off a letter to Miami Police Chief Rodolfo Llanes asking that Ms. Najiy be removed as commander of the department’s Honor Guard after he captured a video during a ceremony last week that showed the assistant chief standing at attention with her arms at her side during the Pledge of Allegiance at a ceremony last week, the Miami Heraldreported.
Mr. Ortiz cited a section of the police department’s code of conduct that allows for punishment if proper attention isn’t given during a flag ceremony. The police department defended Ms. Najiy, and explained that when it comes to the Honor Guard, the city code takes a back seat to U.S. military code, which calls for personnel to face the flag and stand at attention during indoor ceremonies, the Miami Herald reported.
Miami Police Maj. Delrish Moss said the assistant chief was simply following protocol and that not saluting the flag had nothing to do with her personal beliefs, the Miami Herald reported.
The Miami Community Police Benevolent Association, which describes itself as an advocacy group for black police officers, rebuked Mr. Ortiz for questioning Ms. Najiy’s faith, saying it constituted racism.
“We are appalled by the hateful comments that we have been forced to witness over the past several days,” MCPBA President Ella Moore said in a letter she intends to deliver to Chief Llanes, the Miami Herald reported. “Racism cloaked in patriotism is a huge insult to the American flag, the city of Miami police department.”
Mr. Ortiz explained in a response that religious and political beliefs have no place within the department.
“Religious and political views have no business being reflected when wearing a police uniform,” he wrote. “There are plenty of police officers in our department that practice the Muslim faith and pledge allegiance to our country and have a problem with her defiance towards the United States.”
Source http://www.washingtontimes.com/news/2015/apr/27/black-police-union-defends-top-officer-for-not-sal/#ixzz3YYZCxJHY Follow us: @washtimes on Twitter
Posted by theodore miraldi at 7:48 PM