'He says one thing and he does another'

This is the first of two articles on an interview with President Obama’s half-brother Abongo “Roy” Malik Obama conducted via Skype with film director Joel Gilbert. The first article focuses on Malik Obama’s charge that Barack Obama exploited the family in Kenya for political purposes and now has abandoned them. The second article examines the family foundation Malik helped established in Barack Obama’s name and allegations Malik managed funds for the Muslim Brotherhood.

NEW YORK – After making “a very big deal” of them in his autobiographical book and in his first campaign for the White House, President Obama has cynically abandoned members of his African family, charged half-brother Abongo “Roy” Malik Obama, who was the best man in the president’s wedding. 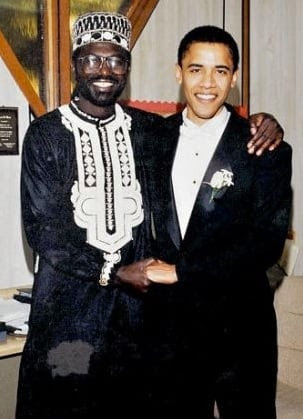 
“He says one thing and he does another,” said Malik Obama, speaking from his home in Kisumu, Kenya, via Skype with filmmaker Joel Gilbert.
“He’s not been an honest man, as far as I’m concerned, in who he is and what he says and how he treats people,” Malik said of his half-brother, noting their relationship was once “very close.”
Gilbert, producer of the documentary “Dreams From My Real Father,” which presents a theory that Obama’s mentor Frank Marshall Davis, who was a member of the Communist Party, was the president’s biological father, asked how that made him feel, as the oldest brother in the family.
“Disappointed, disappointed, used and also betrayed,” Malik answered.
“In the beginning, I didn’t think he was a schemer. His real character, the real personality, the real him, is coming out now.”
Malik said the way his half-brother “has turned and become a different person with the family is the same way that I see him behaving politically.”
“Do your other family members feel the same?” Gilbert asked.
“Yeah, a lot of them do,” Malik answered. “We may be putting a good face forward, (but) deep down inside everybody is really disappointed and upset and angry I guess.
Obama made his African roots the focus of his autobiographical “Dreams from My Father” and his introduction to the nation in 2004 at the Democratic National Convention. At the DNC in Boston, Obama told of being the son of a “foreign student, born and raised in Kenya,” who “grew up herding goats” and went to school “in a tin-roof shack.”
Malik recalled meeting Barack for the first time in 1985 on a trip to Washington, D.C.
“We had a couple of days we shared together, and I was just really overwhelmed and happy,” he said.
Malik said he was the one who encouraged Barack to visit Kenya in 1988. Malik confirmed that he took Barack to visit the grave of their father, as told in “Dreams from My Father.”
“We were together and were really tight at the time and you could talk to him, and we just took everything for granted,” Malik recalled. “I loved him unconditionally, and I felt, I thought, he loved me and the family unconditionally.”

He remembers when Barack, then a community organizer, gave him a tour of his work in Chicago.
In 1992, when Malik was best man at Barack’s wedding, their relationship was still very positive.
“We were very close,” Malik said.
Malik confirmed that Barack served as the best man in his wedding one year later.
Gilbert noted having the impression that the African family formed “the basis” for Barack’s political career.
“Yes, that unusual story contributed greatly to what he is right now,” Malik said, showing Gilbert an early copy of “Dreams from My Father.” 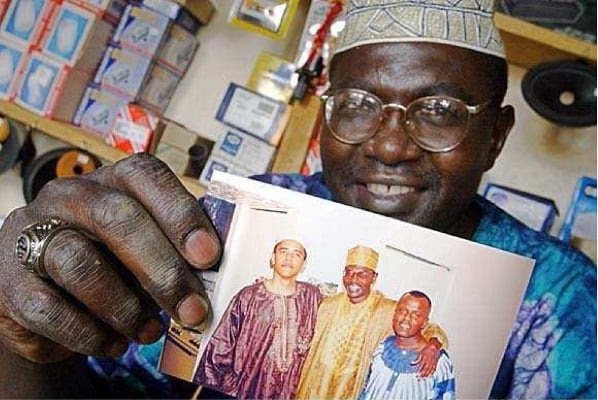 Malik Obama displays a 1980s-era photograph of Barack Obama in Kenya, wearing African garb
Malik explained the original title of the book was “Where My Father Lies Buried,” a title later changed to “Claims of Inheritance” before it was published as “Dreams.”
Malik said Barack sent him a copy of the pre-publication manuscript that included Barack’s handwritten edits, because “he felt like as a representative of his dad, his only elder brother, I should go through the book just to make sure that everything was OK.”
“It was a tedious process, and so I just did the best I could,” Malik said.
Unwelcome
Malik said the problems with his relationship with his half-brother began when Malik attended the first presidential inauguration, Jan. 20, 2009.
Gilbert asked him if he felt treated with honor.
“No,” Malik answered. “I didn’t feel like we were actually welcome and treated well. I didn’t feel that we were really a part of his program.
Gilbert commented that the way the family was treated sounded “very awkward.”
“Yeah, not even then, even up til now, it’s like that,” Malik answered. “If I need to see him, then I have to really make an effort and when I go, I do go, then I go in through the back door or at night. This last visit when I went my aunt died in Boston, I really was crushed and broken.”
In “Dreams from My Father,” Barack Obama explained that he first learned his father in Kenya had died when he was attending Columbia University in New York City and his Aunt Zeituni called him from Kenya with the news.
Gilbert asked Malik if he had asked President Obama for some funds to help bury Zeituni in Kenya.
“Yes I did,” Malik responded. “I told him that she’s our aunt, she’s your father’s sister, she loved you very much, and we need to do something for her. We need around $20,000, and he said that was too much and that it seemed like she deserves what she got.

Read more at http://www.wnd.com/2015/04/brother-dishonest-obama-abandoned-family/#pzwKmlTxlxb17ctz.99
Posted by theodore miraldi at 10:30 AM