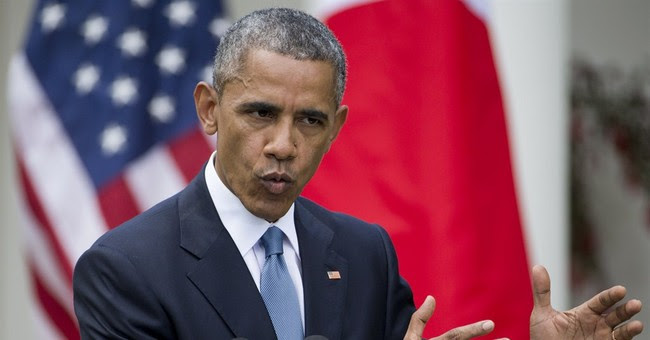 The latest paroxysm of urban violence, looting, and recriminations in Baltimore prompted President Obama on Tuesday to trot out his frayed Blame The Callous, Tight-Fisted Republicans card. After dispensing with an obligatory wrist-slap of toilet paper-and Oreo-filching "protesters" who are burning Charm City to the ground (he hurriedly changed it to "criminals and thugs" mid-word), the 2009 Nobel Peace Prize winner got down to his usual business: hectoring his political opponents and grousing that America hasn't forked over enough money for him to make the "massive investments" needed to "make a difference right now."
If we are "serious" about preventing more riots, the president declared, then "the rest of us" (translation: all of us stingy conservatives) have to make sure "we are providing early education" and "making investments" so that inner-city youths are "getting the training they need to find jobs."
Narcissus on the Potomac wheedled that "there's a bunch of my agenda that would make a difference right now." Me, me, me! His laundry list of the supposedly underfunded cures that he can't get through Congress includes "school reform," "job training" and "some investments in infrastructure" to "attract new businesses."
I'll give POTUS credit: He can lay it on thicker than a John Deere manure spreader.
Let's talk "massive investments," shall we?
In 2009, Obama and the Democrats rammed the $840 billion federal stimulus package through Capitol Hill under the guise of immediate job creation and economic recovery. An estimated $64 billion went to public school districts; another nearly $50 billion went for other education spending. This included $13 billion for low-income public school kids; $4.1 billion for Head Start and childcare services; $650 million for educational technology; $200 million for working college students; and $70 million for homeless children.
How's that all working out? Last week, economists from the St. Louis Federal Reserve surveyed more than 6,700 education stimulus recipients and concluded that for every $1 million of stimulus grants to a district, a measly 1.5 jobs were created. "Moreover, all of this increase came in the form of nonteaching staff," the report found, and the "jobs effect was also not statistically different from zero."
More than three-quarters of the jobs "created or saved" in the first year of the stimulus were government jobs, while roughly 1 million private sector jobs were forestalled or destroyed, according to Ohio State University. President Obama later admitted "there was no such thing" as "shovel-ready projects." But there were plenty of pork-ready recipients, from green energy billionaires to union bosses to Democratic campaign finance bundlers. About $230 billion in porkulus funds was set aside for infrastructure projects, yet less than a year later, Obama was back asking for another $50 billion to pour down the infrastructure black hole.
In 2010, President Obama signed the so-called Edujobs bill into law -- a $26 billion political wealth redistribution scheme paying back Big Labor for funding Democratic congressional campaigns. A year later, several were spending on the money to plug budget shortfalls instead of hiring teachers. Other recipients received billions despite having full educational payrolls and not knowing what to do with the big bucks.
In 2012, with bipartisan support, Obama signed the Jumpstart Our Business Startups Act "to encourage startups and support our nation's small businesses."
In July 2014, with bipartisan support, Obama signed the Workforce Innovation and Opportunity Act to "help job seekers access employment, education, training, and support services to succeed in the labor market and to match employers with the skilled workers they need to compete in the global economy." (Never mind that a GAO review of the feds' existing 47 job-training programs run by nine different agencies "generally found the effects of participation were not consistent across programs, with only some demonstrating positive impacts that tended to be small, inconclusive or restricted to short-term impacts.")
In December 2014, the White House unveiled nearly $1 billion in new "investments" to "expand access to high-quality early childhood education to every child in America" from "birth and continuing to age 5."
That's all on top of the $6 billion government-funded national service and education initiative known as the SERVE America Act, which was enacted less than a month after the nearly $1 trillion stimulus with the help of a majority of Big Government Senate Republicans. The SERVE America Act included $1.1 billion to increase the investment in national service opportunities; $97 million for Learn and Serve America Youth Engagement Zones; and nearly $400 million for the Social Innovation Fund and Volunteer Generation Fund.
The "social innovation" slush fund was intended to "create new knowledge about how to solve social challenges in the areas of economic opportunity, youth development and school support, and healthy futures, and to improve our nation's problem-solving infrastructure in low-income communities." The biggest beneficiaries? Obama's progressive cronies.
Apparently, the richly funded "social innovators" haven't reached the looter-prone neighborhoods of Baltimore yet. But it's not ideologically bankrupt Obama's fault. It's ours.
Source>http://townhall.com/columnists/michellemalkin/2015/04/29/debunking-obamas-bilious-baltimore-babble-n1991785/page/full
Posted by theodore miraldi at 9:36 AM