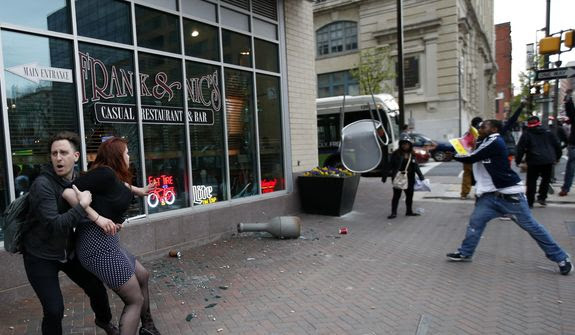 A man, right, throws a chair at a business window as another man tries to restrain a woman attempting to stop the damage, after march to City Hall for Freddie Gray, Saturday, April 25, 2015 in Baltimore. Gray died from spinal injuries about a week after he was arrested and transported in a police van. (AP Photo/Alex Brandon)


By Skip Foreman and Meredith Somers and Juliet


BALTIMORE (AP) — Thousands of protesters took to the streets Saturday in the largest Freddie Gray rally yet, and after hours of peaceful demonstrations, pockets of protesters smashed out police car windows and storefronts.
Two people were hurt in the mayhem and at least a dozen were arrested. The problems happened near Camden Yards, where the Baltimore Orioles game against the Boston Red Sox went on as scheduled, only fans were told toward the end of the game to stay in the stadium because of public safety worries. Before the game, demonstrators fought with fans at a bar.
Gray died April 19 after suffering a fatal spinal injury while in police custody. Authorities have not explained how or when Gray’s spine was injured. Police have said Gray should have received medical attention at the spot where he was arrested — before he was put inside a police transport van handcuffed and without a seat belt, a violation of the department’s policy.
PHOTOS: Freddie Gray protests in Baltimore turn violent
In her first public comments since Gray’s death, his twin sister, Fredricka Gray, appealed for calm as she appeared with the mayor at a news conference.
“My family wants to say, can you all please, please stop the violence?” she said. “Freddie Gray would not want this. Freddie’s father and mother did not want nobody … Violence does not get justice.”
There have been near-daily protests since Gray’s death. On Saturday, a small group threw cans and plastic bottles in the direction of police officers. One protester broke out the window of a police cruiser, grabbed a police hat inside and wore it while standing on top of the cruiser with several other protesters.
At that point, scores of officer rushed into the area, stopped and formed a line, three officers deep. The protesters scattered but returned a few minutes later and began yelling “What do we want? Justice! When do we want it? Now!”
From inside the stadium, fans watched the protesters gather.
Before the protest turned tense and violent, demonstrators filled two city blocks and marched 2 miles to City Hall, where the crowd overtook the grassy plaza adjacent from the building.
Tanya Peacher, a 36-year-old Baltimore resident, said she’d never attended a protest in the city before, but watching a video of Gray’s arrest motivated her.
“I looked at my son,” she said, “and thought ‘that is my son.’ “
Residents young and old, from Baltimore and beyond, voiced their anger at how the department and the city’s officials are handling the investigation into Gray’s death. At one point, the crowd paused for a moment of silence in front of Shock Trauma, the hospital where Gray died. The marchers then migrated to Camden Yards.
At a downtown intersection, a dozen marchers laid down in the street during an impromptu “die-in.”
Wearing a sign around his neck that said “I am Freddie Gray,” 33-year-old Dante Acree joined thousands of others outside City Hall. Acree said he came out to the protest because “it could have been one of my kids.”
“It could have been my brother, my father,” he said. “I’d want the same support.”
Leonard Patterson, 56, said he drove from Manassas, Virginia, to be a part of the protest. Patterson said he decided to come after thinking about his college-aged daughter.
“I’m trying to do everything in my limbs, everything in my power, to make this a better world for her,” said Patterson, holding up his black and white drawing of Freddie Gray. The drawing shows Gray being hoisted from a police van to heaven by two angels.
“I’m here to do what I can. Police brutality is as old as the 1950s, the 1960s. It’s still here,” he said.
Read more: http://www.washingtontimes.com/news/2015/apr/25/protesters-plan-to-shut-down-baltimore-as-question/#ixzz3YQn7WwEQ Follow us: @washtimes on Twitter
Posted by theodore miraldi at 11:53 AM