Fox News star goes all out to rescue Christians

Washington march (Courtesy Freedom Fan)
Declaring President Obama and other world leaders must no longer tolerate the ongoing slaughter of Christians by ISIS, a prominent media figure is calling for at least 1 million Americans to peacefully march on Washington, D.C., and demand action.
In a Facebook post, Fox News host Greta Van Susteren recalled that many in her parents’ generation said they were unaware of the mass execution of Jews during World War II. 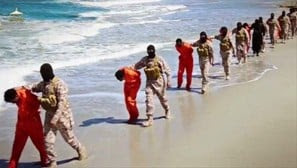 Screen capture from ISIS video purporting to show execution of Ethiopian Christians
“What’s MY generation’s excuse?” Van Susteren wrote regarding the execution of Christians by ISIS. “We know! We even have videos.”
ISIS released a video Sunday purportedly showing a mass execution of Ethiopians in Libya. The video was similar to one released in February showing ISIS beheading 21 captured Egyptian Christians on a Libyan beach.
“Persecution Rising,” the award-winning Whistleblower magazine’s April issue, shows how today’s treatment of Christians worldwide is disturbingly reminiscent of the brutal persecution of the early followers of Jesus.
ISIS, also known as the Islamic State, has declared the formation of an Islamic caliphate governed by Shariah with sovereignty over portions of Iraq, Syria, Libya and Nigeria.
President Obama has determined that no U.S. ground troops will be deployed to fight ISIS while a U.S.-led coalition carries out airstrikes. ISIS recently took control of areas near Ramadi, Iraq, the capital of Anbar Province, just 70 miles west of Baghdad. The advance has forced thousands of civilians to flee to Baghdad.
“Like you, I don’t want to see one more Christian executed for his or her faith,” Van Susteren wrote.
“How much more is the world going to tolerate?”
She fears that the executions happen “so often now that people are not shocked and hence not demanding our world leaders to join together and do what it takes to end this genocide.” 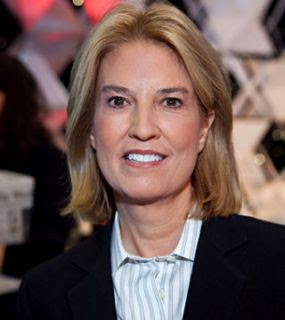 Greta Van Susteren
Van Susteren said that while the U.S. is among many nations trying to stop ISIS, “trying is not enough – we need success.”
“The fact that we are day after day seeing these videos of executions is proof – we are not succeeding,” she wrote. “I know there are many problems here at home in the USA but looking back at my parents’ generation, they never said, in the face of genocide, we are too busy with our problems here.”
Van Susteren said the only way to get the attention of world leaders is to make a big statement by massive numbers of people marching on Washington and other nations’ capitals.
“It has worked before. I don’t know what else to suggest. We need our leaders to know our collective priorities — and stopping this genocide is one of them.”
Her Facebook post has received more than 28,000 “likes” and has been forwarded more than 18,000 times.