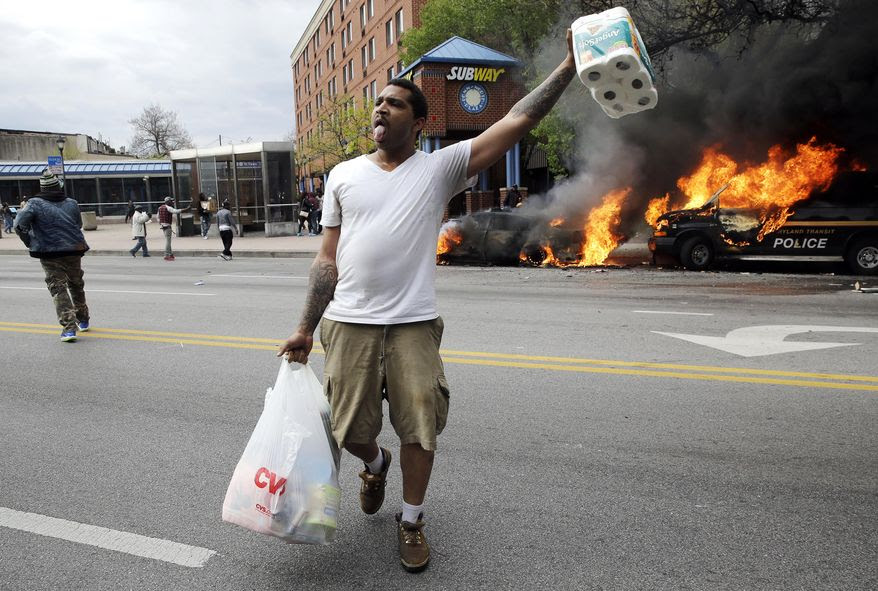 ANALYSIS/OPINION:
With such steady, just and hopeful leadership from President Obama and his recently departed attorney general, Eric H. Holder Jr., is it any wonder that peace, love, patriotism and tranquility reign across the land with such fervor?
In Ferguson, men and women, black and white, raised their hands high to the heavens — all together, as one.
Now Baltimore.
The old city hasn’t seen such enthusiastic civic discourse since “The Star Spangled Banner” was written. All dressed up in their midnight best, bearing the most patriotic pyrotechnics available for such celebrations, Baltimore residents lit up the night sky in ways Francis Scott Key could not have imagined.
“Oh, say can you see! By the dawn’s early light! What so proudly we hailed at the twilight’s last gleaming.”
But this is not just another embrace of freedom in the course of human events. It is so much more than that. It is also — free toilet paper!
And here’s a tip: If the free bale of toilet paper appears singed, just dig around until you find some unburned rolls inside. And if the outside of a roll is burned like a campfire marshmallow, just tear into it and unroll it until you get down to the unburned sheets in the middle.
“Whose broad stripes and bright stars through the perilous fight! O’er the ramparts we watched were so gallantly streaming.”
Baltimore Mayor Stephanie Rawlings-Blake, apparently channeling the president and his peacemakers, spoke about the “balancing act” of liberty versus security. How, she grappled, does one support such giddy celebration while at the same time protecting those who wish not to be celebrated upon or have their property celebrated upon in such an enthusiastic manner.
“We tried to make sure they were protected from the cars and the other things that were going on,” she said. “We gave those who wished to destroy space to do that, as well.”
If only Ben Franklin had been so eloquent! As they say, freedom ain’t free.
“And the rockets’ red glare! The bombs bursting in air! Gave proof through the night that our flag was still there.”
Another Baltimore patriot had his sporting-goods store celebrated. By the time it was all over, all the game jerseys, basketball shoes and hoodies were out in the street, celebrating. They had been liberated.
All that was left were hundreds of crushed red, white and blue boxes that once contained Air Jordans. The old-style Converse high tops preferred by urban hipster wannabes, for some reason, did not get liberated.
“Oh, say does that star-spangled banner yet wave? O’er the land of the free and the home of the brave?”
His job apparently complete, Mr. Holder has departed. Let’s just hope newly installed Attorney General Loretta Lynch doesn’t screw it all up!
Source> http://www.washingtontimes.com/news/2015/apr/28/charles-hurt-baltimore-riots-evoke-spirit-of-star-/#ixzz3YkMN7rVU
Posted by theodore miraldi at 8:13 PM