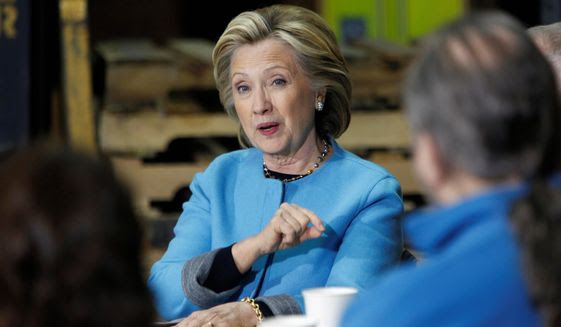 Hillary Rodham Clinton has been under intense pressure from her Democratic Party’s left wing to embrace a plan to expand Social Security benefits and pay for it with increased taxes on wealthy Americans. (Associated Press)


Hillary Rodham Clinton stuck with her centrist persona Monday when her presidential campaign delved into the Social Security debate, ignoring liberals’ calls to expand benefits even as she bemoaned the plight of a New Hampshire woman forced out of retirement and back to work because of skimpy benefit checks.
The former secretary of state pressed the woman during a roundtable discussion to reveal her monthly Social Security income to highlight the problems faced by seniors. She asked for the financial information even though her campaign repeatedly refused to say whether the 67-year-old candidate collects benefits herself or how much she pockets.
Mrs. Clinton said only that as president she would be “100 percent committed” to providing retirees a good quality of life.
The exchange at the event with workers at Whitney Bros., a children’s furniture and toy manufacturer in Keene, New Hampshire, underscored Mrs. Clinton’s cautious approach to her party’s progressive wing.
She has been under intense pressure from her Democratic Party’s left wing to embrace a plan to expand Social Security benefits and pay for it with increased taxes on wealthy Americans.
As a senator in 2007, Mrs. Clinton opposed a plan to raise the cap on income subject to Social Security tax in order to replenish the Social Security Trust Fund, which is projected to be depleted in 2035.
So far, Mrs. Clinton has avoided committing herself to any policy and offered only vague promises to fight income inequality and champion “everyday Americans.”
After the roundtable, Mrs. Clinton also brushed aside reporters’ questions about an upcoming book that examines foreign donations to the Clinton Foundation while she served as secretary of state and suggests the money may have bought “favors.”
She dismissed the accusations about the foundation as “distractions and attacks,” The Associated Press reported.
“I know that that comes, unfortunately, with the territory,” she said when asked about the Peter Schweizer book, “Clinton Cash: The Untold Story of How and Why Foreign Governments and Businesses Helped Make Bill and Hillary Rich,” which hits bookshelves May 5.
According to a report in The New York Times based on an advance copy of the book, it argues that the Clintons got speaking fees and donations in return for her government office doling out favors to various foreign interests.
The dealings include a free trade agreement in Colombia that benefited a major foundation donor’s investments in the South American nation, development projects in Haiti after a devastating earthquake in 2010, and more than $1 million in payments to Mr. Clinton by a Canadian bank and major shareholder in the Keystone XL oil pipeline that occurred while the project was under State Department review.
The investigation reveals that Mr. Clinton’s speaking fees, which came mostly from foreign governments and individuals, increased substantially during his wife’s tenure as the top U.S. diplomat.
“Of the 13 Clinton speeches that fetched $500,000 or more, only two occurred during the years his wife was not secretary of state,” he wrote.
Mrs. Clinton was already dogged by questions about foreign donations to the foundation and potential conflicts of interest while she was secretary of state, as well as the possibility for conflicts of interest if she returned to the White House.
The Clinton Foundation recently changed its policy and barred donations from foreign nations except the closest U.S. allies such as Germany, Canada and Britain.
At the roundtable event, Mrs. Clinton was presented with an opportunity tailored for her to stake a position on Social Security expansion.
Instead, she attacked Republican proposals to gradually transition Social Security into a voucher-style system and voiced support for providing seniors a good quality of life.
“My only question to everybody who thinks we can privatize Social Security or undermine it in some way is, so then what’s going to happen to people [at retirement]. What’s going to happen? It’s just wrong,” she said.
She said the political parties should move beyond what she called rhetoric and ideology to acknowledge that Social Security was indispensable and work to improve it.
“Let’s just take a deep breath here as a country and say, ‘OK, we are going to have a retirement issue and people who worked hard deserve to have enough security when they retire so they can have a good quality of life.’ So I’m 100 percent committed to that,” Mrs. Clinton said.
A woman at the roundtable, Mary DeBell, then told Mrs. Clinton that she retired after 16 years as a supervisor at Whitney Bros. but returned to the company’s assembly line to work part time because she needed the money.
“It was a financial decision,” she told Mrs. Clinton. “As a homeowner, there is always those things that have to be done, those things you have to keep up that you don’t really count on when you’re not working.”
Mrs. Clinton pressed Mrs. Bell about how much she received in monthly Social Security benefits.
Mrs. Bell said her Social Security check and other retirement savings provided her $1,400 a month.
The former first lady, senator and top diplomat did not offer a solution for Mrs. Bell or directly address her predicament.
“If you look just realistically, especially if you still own your home, you are still obviously very independent and able to take care of yourself,” she told Mrs. DeBell. “You’re going to have a lot of expenses both predicted and unpredictable.”
Read more: http://www.washingtontimes.com/news/2015/apr/20/hillary-clinton-ignores-liberals-calls-to-expand-s/#ixzz3XwmfHGxR Follow us: @washtimes on Twitter
Posted by theodore miraldi at 8:43 AM