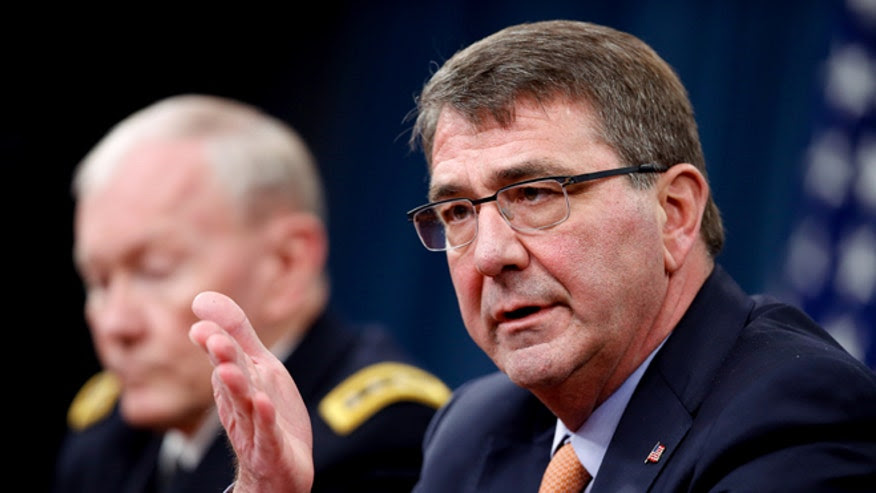 April 16, 2015: Defense Secretary Ash Carter, right, accompanied by Joint Chiefs Chairman Gen. Martin Dempsey, speaks during a news conference at the Pentagon. (AP)
The head of a powerful House panel is threatening to withhold defense funding over the department's alleged stonewalling in a probe of the controversial swap of five Taliban leaders for Sgt. Bowe Bergdahl.
Former Defense Secretary Chuck Hagel had initially pledged to respond to questions, when lawmakers first demanded to know why the Pentagon had not given Congress the requisite 30-day notice before proceeding with the May 31 prisoner trade.
But nearly a year later, the Pentagon has released only a trickle of highly redacted emails from before the swap.
Republican lawmakers now plan to attempt the unusual step of locking down about $500 million -- a quarter of the defense secretary's office budget -- until the Pentagon provides all the documents that the House Armed Services Committee has demanded as part of its investigation. Chairman Mac Thornberry, R-Texas, on Monday plans to introduce a provision to the 2016 National Defense Authorization Act to withhold the money from Defense Secretary Ash Carter's office budget until they comply.
"It's a strange posture for this department, because usually the committee has a better relationship with DoD," a Hill source close to the investigation told Fox News. "It looks like the guidance they are receiving is coming from outside the building."
Fox News was shown examples of the emails that thus far have been shared with the House Armed Services Committee investigators. Key parts were redacted, making them nearly unintelligible at key moments when Pentagon officials were discussing the potential transfer.
In one such email, a Pentagon public affairs officer was briefing a defense lawyer on what the department planned to tell the press about the transfer of the five Taliban leaders from Guantanamo Bay, but the relevant sections were blacked out.
One of the few unredacted sections reads: "We should not use this line which is just a pointless stick in congress' eye."
Thornberry wants to compel the Pentagon to lift the redactions of the unclassified emails that the department has so far provided.
The committee also is demanding all documents related to the Department of Justice's recommendations on the Bergdahl swap. So far, the committee has received 3,000 pages of emails from the Pentagon, but committee staffers say key interagency communications on the Bergdahl trade have not been produced.
"We have no idea what percent of the emails we have," a source close to the investigation said. "It's taken a year."
Pentagon officials say they began providing relevant communications and emails in July.
Department spokesman Army Lt. Col. Joe Sowers said in a statement: "Redactions to the documents have been minimal, and the Department has committed to working with the HASC to accommodate their requests for information."
He said committee staff have conducted 10 transcribed interviews with department personnel.
"The committee was also provided a substantive paper articulating the administration's legal analysis on the transfer of the five detainees," he said.
By law, the Pentagon is supposed to notify Congress about its intent to release Guantanamo prisoners 30 days before doing so, according to the National Defense Authorization Act.
In the case of the Bergdahl swap, it did not.
At the time, White House officials said there had not been time to do so for fear that the opportunity to retrieve Bergdahl -- now facing desertion charges -- was fleeting.
Stephen W. Preston, general counsel of the Department of Defense, said the department "did not ignore the law." He told lawmakers on the committee last June that they "solicited the legal guidance on the legal issues that would apply in application in this extraordinary set of circumstances in which the president was seeking to repatriate a servicemember who was in captivity and in peril."
The independent Government Accountability Office, though, declared that the administration violated the law by not notifying Congress in advance of the swap.
All the while, lawmakers have sought a more thorough accounting of the decision.
In a letter to Hagel on June 9 of last year, then-House Armed Services Committee Chairman Buck McKeon requested all correspondence about the Bergdahl case since January 2012.
On June 11, Hagel told Congress: "We could have done a better job of keeping you informed."
He said that concerns about Bergdahl's health and safety caused them to move quickly, ignoring the 30-day notification requirement.
Eleven months after Bergdahl's release, Republican Hill investigators still do not believe that they have been given all the pertinent information surrounding the Bergdahl swap.
http://www.foxnews.com/politics/2015/04/24/house-panel-threatens-to-cut-defense-secretary-budget-over-bergdahl/
Posted by theodore miraldi at 7:10 PM