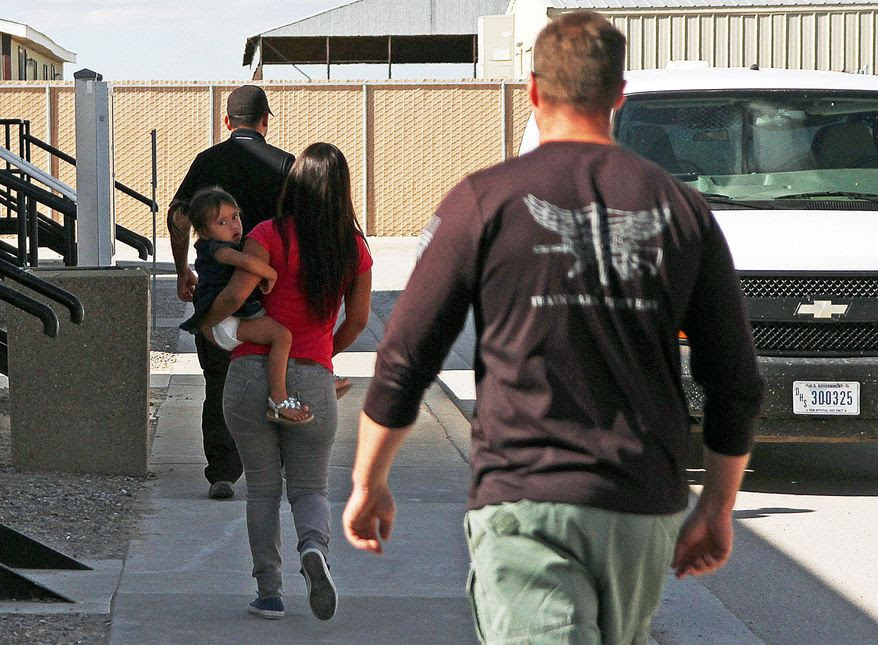 FILE- In this Sept. 10, 2014 file photo, a woman and child are escorted to a van by detention facility guards inside the Artesia Family Residential Center, a federal detention facility for undocumented immigrant mothers and children in Artesia, N.M, A surge of cases involving immigrants from Central America has backed up federal courts and U.S. Immigration and Customs Enforcement. The cases have been moved to Denver by judges in Arlington, Va. Officials say it makes more sense to hold the proceedings in the same time zone as the detention center. Hearings are being held by video from Artesia, N.M. starting on Monday, Sept. 29. (AP Photo/Juan Carlos Llorca, File)

Being a single mother or witnessing a gang crime could be enough for Central American illegal immigrants to get on the path to asylum under guidance the Homeland Security Department issued last week, opening up new ways for the current surge of illegal immigrants to gain a legal foothold in the U.S.
The guidance, a 27-page training document from U.S. Citizenship and Immigration Services, says women who flee Central America because they fear being a single woman at the head of a household can be deemed to be part of a targeted social group, and can make a claim that they have a “credible fear” of being targeted in their home countries.
Likewise, victims of gang crimes, which are epidemic in El Salvador, Guatemala and Honduras, can make the case that they fear retaliation — also proving a “credible fear” and earning a place on the pathway to getting asylum in the U.S. — according to the agency documents, which were obtained by the Judiciary Committees in both the House and Senate.
“It is an evolving area of law,” Joseph E. Langlois, associate director of the refugee and asylum program at USCIS, told the Senate committee at a hearing Thursday.
Congressional critics, though, said the new rules are more a rewrite than an evolution, and predicted they will make it possible for most of those who have arrived in the recent surge of illegal immigration from Central America to gain initial protected status.
“It changes the standards. it’s breathtaking in its liberalities in regard to what a refugee is,” Sen. Jeff Sessions, chairman of the Judiciary Committee’s immigration subcommittee, told Mr. Langlois.
The asylum system is supposed to protect persons who are targeted because of “immutable characteristics” such as their race or religion, and who fear harm or death if they are forced to return to their home countries.
But asylum is not meant to be a safety valve for the world’s problems such as economic troubles or high crime rates, said administration critics who were shocked that the new guidance suggested being a “female head of household” could qualify as a protected social group.
“That has no conceivable connection to persecution,” said Jessica Vaughan, policy studies director at the Center for Immigration Studies, who called the new guidance “absurd” and said it amounts to a “unilateral rewriting of immigration laws.”
Ms. Vaughan also said the guidance serves as an “instruction handbook” for future illegal immigrants to say all of the key phrases to earn their way onto the asylum track.
The guidance offers several specific examples of cases where those seeking to enter the country should be deemed asylum applicants, including a woman whose husband abandoned her, and who received threats from a gang because she no longer lived with her husband.
“Living without a male to head the household is fundamental: not something applicant should be required to change,” the USCIS guidance concluded in determining that such a person would be considered part of a protected social group on the basis of her living alone and the macho “cultural pattern” of Latin America.
If the gang didn’t mention the woman’s living along or being a single mother in its threats, though, then she wouldn’t qualify, the guidance said.
In the crime witness or victim examples, USCIS said someone who reported a gang-related burglary and who was threatened afterwards qualified as a member of a “cognizable” protected group.
“Officials at the Department of Homeland Security are exploiting our asylum system so that almost anyone arriving in the U.S. who claims asylum will likely be granted it,” said Rep. Robert W. Goodlatte, chairman of the House Judiciary Committee. “We have a generous asylum system, and rightfully so, but the Obama Administration should not use it to provide those who do not fit the existing standards with a golden ticket to the United States.”
The asylum and refugee programs — the former applies to humanitarian applications from within the U.S., while the latter are applications made from outside the country — have come under scrutiny in recent years as critics have said the standards have slipped, and more people are abusing the system.
The family of the Tsarnaev brothers, the perpetrators of the 2013 Boston Marathon bombing, were granted asylum a decade earlier, claiming fear of persecution as ethnic Chechens living in Kyrgyzstan.
Under the asylum program, foreigners who reach the U.S. make an initial claim of credible fear of violence or persecution if they return to their home countries. USCIS makes an initial determination based on what’s known as a “credible fear interview.”
A “fear of generalized violence” is not enough to qualify, but fearing violence because you are part of a specific group is, officials said.
Asylum seekers who are deemed to have credible fear can released from custody and allowed to be free in the U.S. They eventually go before an immigration judge for a final decision.
Read more: http://www.washingtontimes.com/news/2015/apr/23/fed-agency-single-hispanic-females-deserve-asylum/#ixzz3YAwGuvQn Follow us: @washtimes on Twitter
Posted by theodore miraldi at 6:49 PM