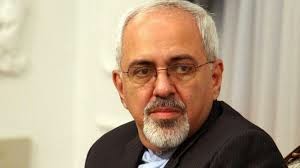 Max Boot
Item #1: On Tuesday, Iranian Revolutionary Guard Corps gunboats seized the Maersk Tigris, a Danish-owned, Marshall Islands registered container ship that was peaceably transiting an international maritime route through the Straits of Hormuz. The ship is now being held by Iran along with its crew members.
Item #2: On Wednesday in New York Iranian Foreign Minister Mohammad Zarif gave a “blustery and self-righteous” series of remarks which made it seem as if a nuclear agreement is a done deal—on Iran’s terms. Obama “will have to stop implementing all the sanctions, economic and financial sanctions that have been executive order and congressional. However he does it, that’s his problem,” Zarif said, adding that a UN resolution endorsing the agreement would have to be endorsed by the U.S., “whether Senator Cotton likes it or not.”
Oh and Zarif made clear that the lifting of sanctions would occur within weeks of the agreement being signed (contrary to White House claims that sanctions relief would be phased), while also mocking Obama’s claims that sanctions could “snap back” in the event of Iranian violations: “If people are worrying about snapback, they should be worrying about the U.S. violating its obligations and us snapping back,” he said. “That is a point that the United States should be seriously concerned about. This is not a game.”
What’s the connection between these two seemingly unrelated events? Both, I submit, are evidence of Iranian arrogance. The kind of arrogance that Iran exhibits by hijacking a ship registered to an American protectorate and then by lecturing American leaders that they will have to abide by Iran’s terms for a nuclear deal—or else.
This is not the way Iran would talk or act if it feared the United States. But plainly it doesn’t. And why should it? Obama has made clear, repeatedly and emphatically, that he is desperate for a nuclear agreement because the alternative to such an agreement is war—and there is no worse option than that in the president’s mind. So desperate for an agreement, in fact, that the president is willing to overlook Iranian aggression in Iraq, Syria, and Yemen—and even to overlook Iran’s jailing of three American citizens and its seizure of a ship belonging to allies that we are pledged to defend.
It is indicative of where we stand that there has been nary a peep of protest about the hijacking of the Maersk Tigris. The Pentagon even leaked word that the U.S. is not legally obligated to protect the Maersk Tigris, as if the U.S. cannot act to protect its moral and strategic interests even if not compelled to do so under the terms of some piece of paper. From the White House: “The White House said on Wednesday it was concerned about the impact on navigation caused by Iranian authorities’ seizure of the Maersk Tigris container ship in the Strait of Hormuz and said it was monitoring the situation.” Translation: “Ship, what ship? Who cares? The only thing that matters is the nuclear accord.” (Compare this anodyne language, incidentally, with the harsh invective directed at Israeli Prime Minister Benjamin Netanyahu for infelicitous campaign rhetoric.)
And yet the very reason why Iran is able to drive such an advantageous bargain—the reason why it has hijacked the negotiations to legitimate its illegal nuclear program—is precisely because the U.S. has spent years turning the other cheek at Iranian aggression. This is not exclusively a problem of the Obama administration—the Reagan administration, after all, traded arms for hostages and did not retaliate for the bombing of the U.S. Marine barracks and embassy in Beirut, while the George W. Bush administration did nothing to punish Iran for killing hundreds of American troops in Iraq with its advanced munitions.
But the problem has become much more pronounced under the Obama administration, which sees détente with Iran as its lasting legacy. That’s why Iran’s foreign minister feels free to come to New York and act like a haughty master of the universe, knowing there will not be even a peep of protest from this thoroughly intimidated administration.
Source>https://www.commentarymagazine.com/
Posted by theodore miraldi at 5:51 PM