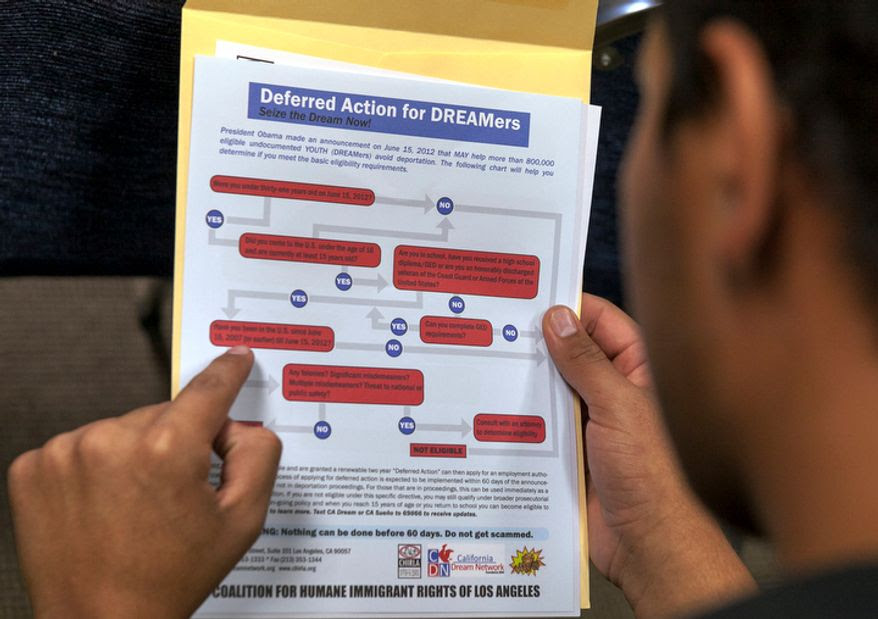 Photo by: Damian DovarganesA legal immigrant reads a guide of the conditions needed to apply for the so-called 'DREAMers' Obama program, formally known as Deferred Action for Childhood Arrivals (DACA), at the Coalition for Humane Immigrant Rights offices in Los Angeles on Aug. 15, 2012. Hundreds of thousands of young illegal immigrants scrambled to get papers in order as the U.S. started accepting applications to allow them to avoid deportation and get a work permit, but not a path to citizenship. (Associated Press) **FILE**

The man accused of murdering a former contestant on “America’s Next Top Model” was already a known gang member when he was approved for President Obama’s amnesty for so-called Dreamers, the chairman of the Senate Judiciary Committee revealed Tuesday.
U.S. Citizenship and Immigration Services, the agency charged with approving amnesty applications, admitted it broke its own rules in approving the gang member for tentative legal status, agency chief Leon Rodriguez said in a letter to Sen. Charles E. Grassley.
“Based on standard procedures and processes in place at the time, the [deferred action] request and related employment authorization should not have been approved,” Mr. Rodriguez said in admitting his agency’s catastrophic error in approving Emmanuel Jesus Rangel-Hernandez.
Mr. Rodriguez said Mr. Rangel’s immigrant’s status was revoked March 5 — but that was a month after he’d already been arrested by police and accused of killing Mirjana Puhar, a contestant last year on the “Top Model” program, and three others.
The admissions are a serious black eye for Mr. Obama’s amnesty program, which the president has insisted would allow generally law-abiding illegal immigrants to live and work without fear, while weeding out serious criminals.
USCIS admitted in its letter to Mr. Grassley that another 20 immigrants with potential gang ties have also been approved, and officers are now going back and trying to figure out whether rules were broken in those cases as well. Mr. Rodriguez said his officers will also face retraining so they know which applications to deny.
But Mr. Grassley said the approvals exposed the holes with the amnesty, which Mr. Obama announced in 2012 and which has approved more than 600,000 Dreamers for tentative legal status under his program, officially known as Deferred Action for Childhood Arrivals, or DACA.
“It’s no secret that USCIS staff is under intense pressure to approve every DACA application that comes across their desk, and based on this information, it’s clear that adequate protocols are not in place to protect public safety,” Mr. Grassley said. “The fact is that this tragedy could have been avoided if the agency had a zero tolerance policy with regard to criminal aliens and gang members.”
DACA was viewed as a test run for Mr. Obama’s broader amnesty, announced late last year, but which has been halted by a federal court.
The revelation that criminals got approval could dent the president’s legal argument to re-start the new amnesty, with the appeals court judges hearing the case showing deep interest in how well the background checks work.
According to the immigration agency, several hundred people have had their amnesty revoked for gang ties: 28 in 2013, 131 in 2014 and 123 so far in 2015.
Mr. Grassley raised the case of Mr. Rangel earlier this year after he learned that the man had previous run-ins with the law in North Carolina, and was facing deportation until the administration granted him amnesty.
Dreamers are the young adult illegal immigrants who are viewed as the most sympathetic figures in the immigration debate. But they are increasingly turning up in the criminal justice system.
The Homeland Security Department acknowledged last month that it had snared 23 Dreamers in an operation designed to arrest thousands of serious criminals.
Puhar, the model contestant Mr. Rangel is accused of killing, was an immigrant herself, having been born in Serbia but fleeing with her family at age 5 after the Kosovo war, the Charlotte Observer reported.
Read more: http://www.washingtontimes.com/news/2015/apr/21/obama-admin-gives-amnesty-known-gang-member/#ixzz3XyYWF2ok Follow us: @washtimes on Twitter
Posted by theodore miraldi at 4:05 PM