Record 51 million immigrants in 8 years, will account for 82% of U.S. growth


Legal and illegal immigrants will hit a record high of 51 million in just eight years and eventually account for an astounding 82 percent of all population growth in America, according to new U.S. Census figures.
A report from the Center for Immigration Studies that analyzed the statistics said that by 2023, one in seven U.S. residents will be an immigrant, rising to one in five by 2060 when the immigrant population totals 78 million.
The report was provided to Secrets and released Wednesday evening.
RELATED: The killer question of immigration reform
The surge in immigrant population, both legal and illegal, threatens to slam into the presidential campaign as GOP candidates move to figure out what their position is and the president tries to use executive powers to exempt some 5 million illegals from deportation. 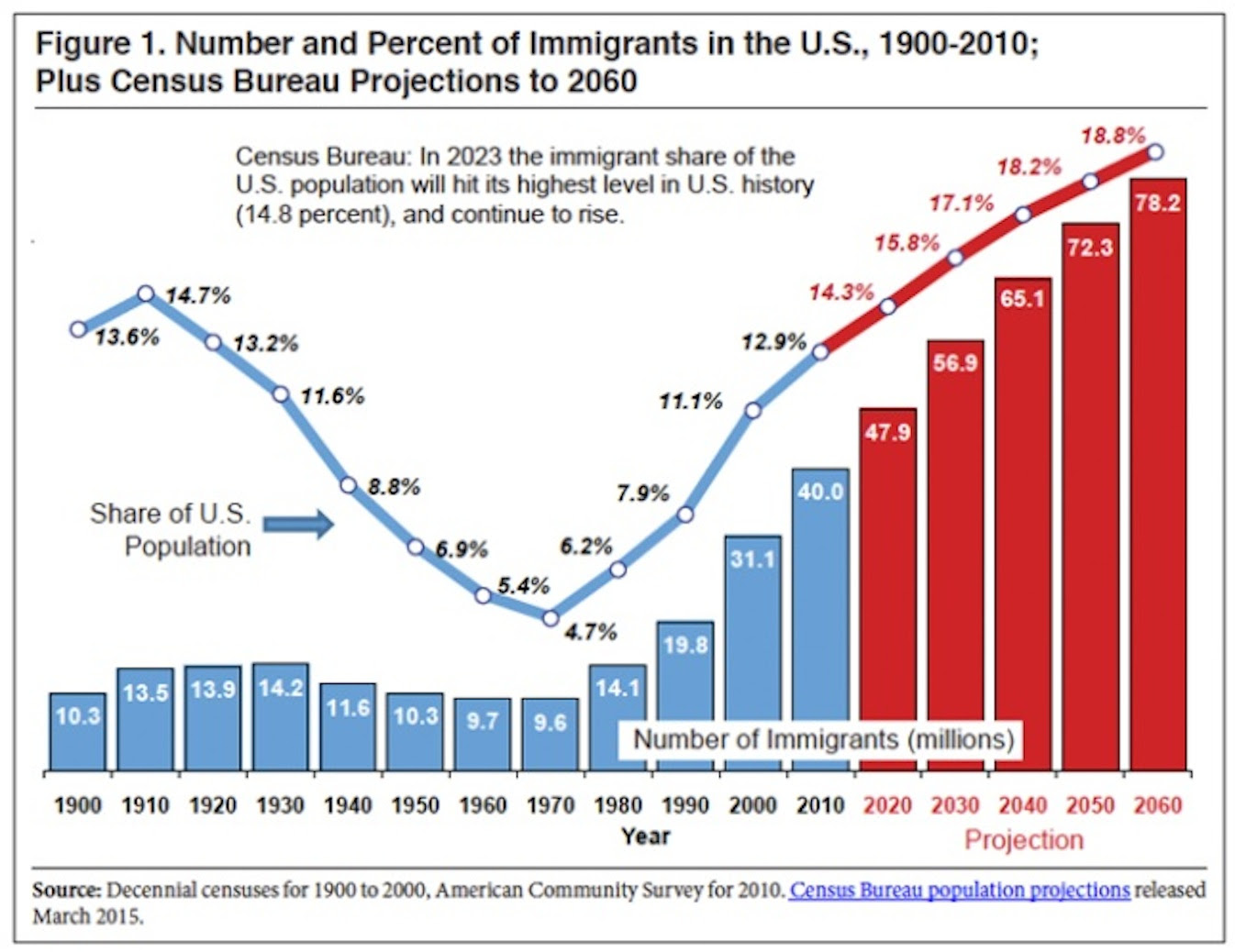 Wisconsin Gov. Scott Walker disrupted the debate this week when he said that legal immigration also needs to be reformed to make sure Americans don't suffer by losing jobs to new citizens.
But even more, the CIS report said that the surge in mostly legal immigrants will have a huge impact on the nation and taxpayers.
RELATED: Poll: No, Obama didn't have the authority to grant amnesty
"These numbers have important implications for workers, schools, infrastructure, congestion and the environment," said Steven Camarota, the center's director of research. "They also may have implications for our ability to successfully assimilate and integrate immigrants. Yet there has been almost no national debate about bringing in so many people legally each year, which is the primary factor driving these numbers."
Those numbers are likely to shake up Washington's political debate over the 12 million illegals in America, the expected 70,000 expected to pour over the border this year and the 4.4 million legal immigrants on a State Department waiting list who have relatives or jobs in the U.S.

A protest in California. AP Photo
A key senator steering the immigration debate, Alabama Republican Jeff Sessions, has warned that higher numbers of immigrants will hurt the middle class. In a letter to the New York Times Saturday, he wrote, "It defies reason to argue that the record admission of new foreign workers has no negative effect on the wages of American workers, including the wages of past immigrants hoping to climb into the middle class. Why would many of the largest business groups in the United States spend millions lobbying for the admission of more foreign workers if such policies did not cut labor costs?"
RELATED: Obama is losing his greatest asset in immigration push
On Friday, key business leaders including the U.S. Chamber of Commerce and a group associated with former New York Mayor Michael Bloomberg plan to pitch for more immigration. Their schedule is below.
The numbers, as seen in the highlights below, will also raise concerns that Washington is giving the keys to the nation to new immigrants:
• The immigrant population will grow four times faster than the native born population, reaching 15.8 percent, or 57 million, of the nation's population in 2030, 17.1 percent, or 65 million, in 2040, and 18.8 percent, or 78 million, in 2060.
• Net immigration this year will be 1.24 million; green cards about 1.1 million.
• Immigrants and their descendants "will account for the overwhelming share of population growth," said the Center in projecting growth. They will account for 75.5 percent from 2010-2050 and 82 percent from 2010-2060.
• Census Bureau projects that in 2023 the nation's immigrant population, legal and illegal, will reach 14.8 percent of the total U.S. population, the highest share ever recorded.
RELATED: Expert: Obama's amnesty 'profoundly unfair' to 4 million legal immigrants, a new high
Paul Bedard, the Washington Examiner's "Washington Secrets" columnist, can be contacted atpbedard@washingtonexaminer.com.
DOCUMENT
TEXT
Zoom
p. 1