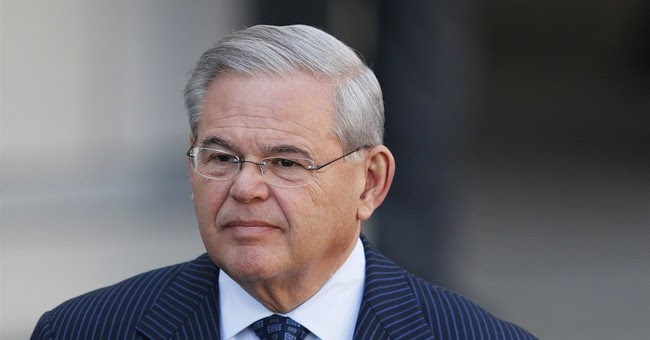 
America has an alphabet soup of visa programs for foreigners to choose from: B-1 for business visitors, B-2 for tourists, EB-5 for investors, F-1 for students, and so on. All are overwhelmed, loosely monitored and riddled with fraud and corruption. According to the recently unsealed federal indictment against him, sleazy Sen. Bob Menendez, D-N.J., took it upon himself to add his own very special, crooked path to the U.S.
Call it the 36DD Visa.
The New York Post recounted this weekend how Menendez and his staff pressured the State Department to expedite the foreign tourist and student visa approval processes for a bevy of buxom foreign beauties. One of them, Brazilian actress and nudie model Juliana Lopes Leite (a.k.a. "Girlfriend 1"), had her F-1 student visa application moved to the top of the Mount Everest-high heap in 2008 as a favor to Menendez's now-indicted donor pal and accused Medicare fraudster Salomon Melgen.
A senior Menendez staffer emailed a State Department staffer that Girlfriend 1 "has her visa application appointment in Brasilia, Brazil, tomorrow. ... Sen. Menendez would like to advocate unconditionally for Dr. Melgen and encourage careful consideration of (Girlfriend 1)'s visa application."
Oba!  "The State Department responded within hours, and the woman got her visa the following day," the Post reported. Sugar daddy Melgen set up a shady nonprofit to help fund Lopes Leite's education, according to the indictment. The IRS-approved "foundation" for "helping with the educational needs of disadvantaged persons" also subsidized college costs for a second woman "romantically linked to Menendez."
Here's my question: Menendez played visa-fixer in 2008. Lopes Leite graduated with a law degree from the University of Miami in 2010, but spent most of her time jet-setting around the world with Melgen. According to the Post, she is still here and now practicing law in Miami -- seven years after obtaining her 36DD visa. Why and how is she still here?
The F-1 is supposed to be a temporary visa. Applicants have to prove to consular officials that they plan to go back home after their studies as a condition of getting into our country and availing themselves of our educational system. The deal was that they'd gain a positive attitude about the U.S. and serve as ambassadors of our values and principles when they returned to their native lands. Aside from the extreme abuse and corruption involved in the Menendez scheme, this case spotlights the wider everyday systemic failures to enforce the original intent and rules of the program.
Nearly 500,000 F-1 foreign students come to the U.S. every year. Despite repeated warning flags involving foreign students on F-1 visas who slipped through the cracks -- the 1993 World Trade Center bombing, the 9/11 plot, the Times Square bombing plot, the Boston Marathon bombing -- Washington refuses to hit the pause button and get the program under control. By the federal government's own admission in multiple independent audits and inspector general reports, officials at the Departments of Homeland Security and State cannot efficiently police and monitor the flood.
Those assessments show that we have failed to carefully vet the student applicants overseas; failed to screen out the fly-by-night "schools" certified to enroll them in the U.S.; failed to keep tabs on the "designated school officials" entrusted to track their compliance; failed to verify that the employers who are approved to sponsor F-1s for education-related "job training" are not exploiting the program as a pipeline for cheap foreign labor undercutting American workers; failed to ensure that F-1s go home when their visas expire; and failed to track and eject overstayers and violators who break the rules.
Under federal corruption law, it is a crime to trade "things of value" with politicians to influence official acts or commit fraud. Yet, for decades, America has recklessly traded away one of its most precious "things of value": entry into this country. It's clear what Menendez and Melgen got out of F-1. But what about the rest of the country? Each and every temporary visa program is supposed to enhance the national interest -- not just the naked demands and desires of universities, corporations and dirty old men.
Instead of stemming the tide and making enforcement a priority, politicians in both parties are pushing forward with various schemes to radically expand and extend the foreign student visa racket. It's proof positive that Brazil's got nothing on the biggest boobs in Washington.
http://townhall.com/columnists/michellemalkin/2015/04/22/sleazebob-menendezs-36dd-visa-program-n1988546/page/full
Posted by theodore miraldi at 8:10 AM