The Men Who Started the Hugo Awards Controversy


Review: The Work of Larry Correia and Brad Torgersen 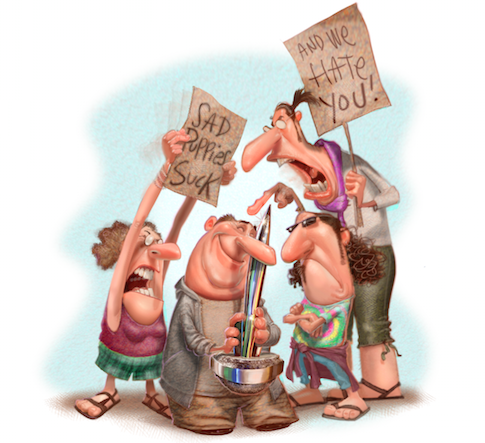 A prominent editor of speculative fiction (a term that encompasses both science fiction and fantasy) declared in 2013 that the genre had “moved away from the white male Anglo Saxon Mayberry of its youth and towards a more mature, diverse, and inclusive future.” His words were an encapsulation of trendy opinion among certain sorts of spec-fic fans. They were also flat-out wrong. If early science fiction and fantasy had an ideology (a doubtful proposition at best) it was techno-cultural utopianism—the opposite of the conservatism of The Andy Griffith Show. The giants of the field wrote in explicit support of civil rights, sexual liberation, and women’s equality. But ideologues must exaggerate past evils to justify their present excesses, and so down the memory hole go Heinlein’s 1961 A Stranger in Strange Land and LeGuin’s 1969 The Left Hand of Darkness.
2013 was also the year a conservative-leaning author, Larry Correia, (later joined by Brad Torgersen) decided to take a stand against this kind of demographic obsessiveness. Beginning that year, they began to promote a slate of candidates each year for speculative fiction’s most prestigious awards—the Hugos—and urged readers on their personal blogs to nominate the candidates en masse. This year it worked. Their slate dominates this year’s nominations. A predictable wave of outrage followed, culminating in an over-the-top hit piece in Entertainment Weekly. Correia and Torgersen have become boogiemen to liberals and folk heroes to conservatives.
In all this fuss, the quality of their work has been largely overlooked. Both writers recall an earlier time in speculative fiction’s development, before the New Wave of the sixties and seventies brought in experimental literary techniques. Correia is the better-known of the two. His hugely popular Monster Hunter International series is pure, distilled genre fiction: a hero, a girl, monsters to slay, and big guns to slay them. The main character, Owen Pitt, is a street-fighting accountant and former competitive shooter who finds himself wrapped up in a battle against a Lovecraftian evil after his boss unexpectedly turns into a werewolf. Benevolent orcs make an appearance, as do a band of trailer-trash elves. The prose and sensibility are defiantly middle-American. Government agencies obstruct and oppose, wielding power without authority. The good guys are southern redneck gun nuts. While the first novel struggles with dialogue, it entertains. The series improves from there.
Correia hits his stride with the Grimnoir Chronicles, a tremendously fun, X-Men-influenced fantasy series set during an alternate-history Great Depression. Moving away from the first person of Monster Hunter, the Chronicles nails an easygoing, plot-driven aesthetic. For all the accusations of white supremacy that were hurled at him over the course of the Hugo controversy, it is worth noting that Correia is Hispanic, and that his books are populated with a diverse cast of characters. No individual in his stories is defined by demography, an aesthetic choice well worth emulating.
Before the Hugo controversy, Brad Torgersen was a little known, journeyman writer. The old path to success for moving up in speculative fiction (obscurity, then short story credits, then a book deal, and finally mainstream success) has narrowed greatly, but Torgersen’s career wouldn’t be out of place 40 years ago. First he won the prestigious Writers of the Future contest. Then he published two well-received shorts in Analog, which brought him to the attention of Baen Publishing, which brought out his novel The Chaplain’s War late last year.
Torgersen is a polished storyteller, perhaps even more so than Correia. He writes with a confident economy that speaks to his hard-knock roots in the minor leagues. The Chaplain’s War is old-school Science Fiction, set in a universe where man has been conquered by an alien race. An assistant chaplain ministers to his flock inside of a refugee camp surrounded by a lethal force field that gets smaller by the day. When an alien academic comes to study an unfamiliar human institution, religion, the chaplain seizes the opportunity to forestall the destruction of the camp and the people inside. The story is a meditation on the role of faith that sidesteps clichés and easy answers. Readers will enjoy Torgersen’s willingness to let the story speak for itself without unnecessary embellishment, a creative modesty earned through hundreds of publisher rejection letters.
Correia and Torgersen’s approach to storytelling finds itself in the same position as modern cultural conservatism—fighting a rearguard action against a swelling elite consensus. Rule changes will prevent them from succeeding in stacking the Hugo ballot again, and the dominant forces of speculative fiction will once again reassert themselves. Future awards will continue the practice of judging the author first and the story second. But Torgersen and Correia have bright careers ahead of them—and both their efforts with the Hugos and their books have given the identity politickers, the social justice warriors, and the literary snobs a black eye.
http://freebeacon.com/culture/the-men-who-started-the-hugo-award-controversy/
Posted by theodore miraldi at 10:18 AM