Walker hits back at WSJ criticism of legal immigration comments 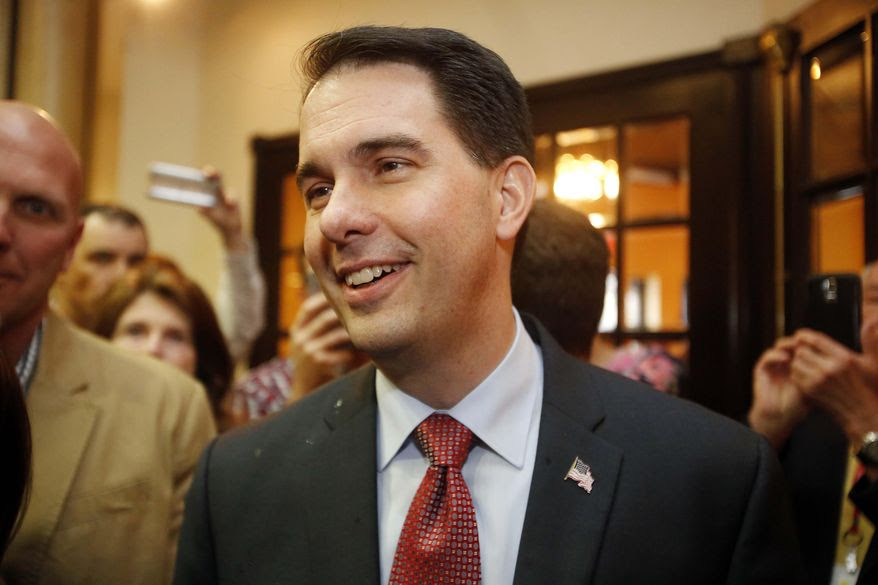 FILE - In This April 18, 2015 file photo, Wisconsin Gov. Scott Walker smiles as he arrives at the Republican Leadership Summit in Nashua, N.H. For Democratic politicians, same-sex marriage has become an easy issue: They're for it. Many Republican VIPs, face a far more complicated landscape. Opinion polls show that a majority of Americans, including young Republicans, favor nationwide legalization. A Supreme Court ruling to that effect might be a relief to some GOP candidates, such as Walker, who has made clear that gay marriage is not a favorite topic of discussion.(AP Photo/Jim Cole, File)

Wisconsin Gov. Scott Walker is hitting back at a Wall Street

Journal opinion piece that criticized him for recent comments he made saying American workers and American wages should be kept in mind when making decisions on legal immigration.
Mr. Walkertold radio host Howie Carr his position on immigration is “simple” and that it starts with securing the borders and having an effective E-Verify system.
“No amnesty,” Mr. Walker said. “If you want to be a citizen, that’s a whole different thing. You got to go back to your country of origin and get back in line like anybody else.”
On legal immigration, he said, “right now, there are restrictions in America - that column and others acted like there’s no restrictions. There are restrictions on legal immigration today - they just don’t make a whole lot of sense.”
He said the Journal has been right for defending him in some of his battles with labor unions in Wisconsin, but “in this one - really wrong on so many levels.”
The Journal piece points out that Mr. Walker mentioned recently he’s talked to GOP Sen. Jeff Sessions of Alabama, one of Capitol Hill’s staunchest opponents of illegal immigration who has spoken out against expanding H-1B visas for guest workers.
“Mr. Walker is right that the GOP needs to focus on raising the incomes of average Americans, but the way to do that is with policies that increase growth and improve upward mobility. Zero-sum labor economics will do neither,” the piece says.
Mr. Walker, a potential 2016 GOP presidential contender, recently told talk show host Glenn Beck: “It is a fundamentally lost issue by many in elected positions today. What is this doing for American workers looking for jobs? What is this doing to wages? And we need to have that be at the forefront of our discussion going forward.”
Mr. Walker defended his position in his conversation with Mr. Carr that “a strong economy should be paramount,” “and priority number one in that regard should be making sure that we think about the impact on American workers and American wages.”
When unemployment is high and labor participation rates are low, he said, “you don’t have very much immigration because you don’t want to flood the market.”
If, over time, unemployment goes down and labor participation rates go up, “then you can change things,” he said.
“I just said make American workers and their wages your number one priority,” he said. “If we’re always thinking about the impact on the hard-working Americans, we’re gonna be fine and [if] we don’t think about that, well, then we get bad policies in America.”
Source> http://www.washingtontimes.com/news/2015/apr/28/scott-walker-hits-back-wsj-piece-criticizing-his-l/#ixzz3YcCfrqhU
Posted by theodore miraldi at 10:45 AM