Baltimore cop: Morale ‘in the sewers’ since Freddie Gray riots 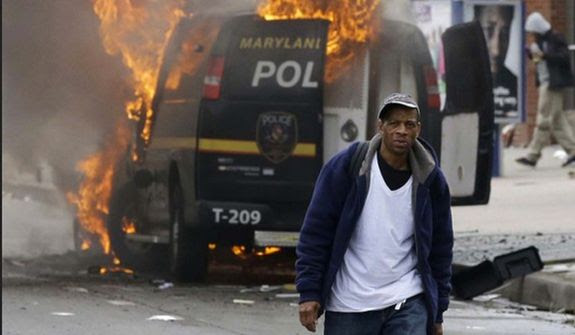 
An anonymous Baltimore police officer said Friday that police force morale is “in the sewers” following riots that occurred after the death of Freddie Gray. Mr. Gray, 25, died April 19 from injuries he received during his April 12 arrest.
The officer told CNN’s Anderson Cooper that morale is “the worst of the worst I’ve ever seen in my career,” and that proactive policing has stopped.
Baltimore police, for all intents and purposes, are only responding to 911 calls and no longer engaging in the community, the officer told the “AC360” host. He said when officers do respond to a call, they go in pairs for their own safety.
“As officers we’re saying, hey, we’ve gotta have each other’s backs,” the officer said, CNN reported.
The anonymous cop said that Baltimore protesters were right about one thing, police are driven by arrest numbers.
“The command staff believe that arresting people is the way of deterring crime,” he said, CNN reported.
The officer said the only way to improve the situation is for police Commissioner Anthony Batts and his command staff to go.
Six Baltimore cops are charged in the death of Mr. Gray. One of the officers faces a second-degree murder charge.
Source>http://www.washingtontimes.com/news/2015/may/23/baltimore-cop-tells-anderson-cooper-morale-in-the-/#ixzz3azWXpCeh
Posted by theodore miraldi at 3:24 PM