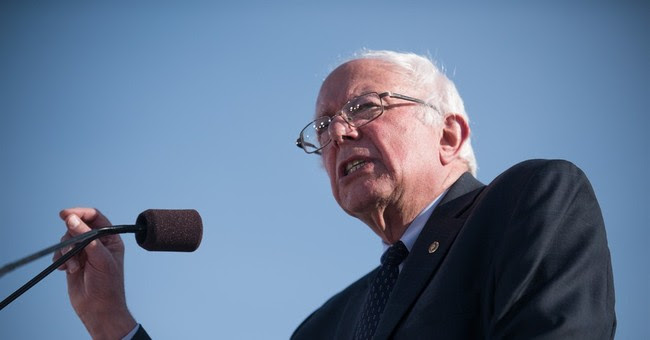 Socialist genius Bernie Sanders has figured out what's really ailing America.
Our store shelves have too many different brands of deodorant and sneakers. Just look at all those horrible, fully stocked aisles at Target and Walgreens and Wal-Mart and Payless and DSW and Dick's Sporting Goods. It's a national nightmare! If only consumers had fewer choices in the free market, fewer entrepreneurs offering a wide variety of products and fewer workers manufacturing goods people wanted, Sanders believes, we could end childhood hunger.
Nobody parodies the far left better than far-leftists themselves.
In an interview with financial journalist John Harwood on Tuesday, Sanders detailed his grievances with an overabundance of antiperspirants and footwear. "You don't necessarily need a choice of 23 underarm spray deodorants or of 18 different pairs of sneakers when children are hungry in this country. I don't think the media appreciates the kind of stress that ordinary Americans are working on."
Try to suppress a snicker: Sanders, Decider of Your Sanitary and Footwear Needs, is casting himself as the Everyman in touch with "ordinary Americans" to contrast his campaign with Hillary "my Beltway lobbyist and foreign agent operator Sid Blumenthal is just a friend I talk to for advice" Clinton.
Blech. By the looks of the 2016 Democratic presidential field, liberals really do practice the anti-choice principles they preach.
At Caracas-on-the-Green Mountains, every business owner's success robs starving babies of vital nutrition. Because some tummies may be grumbling somewhere across the fruited plains, all must suffer. In Sanders' world, it's the "greedy"-- America's real makers, builders and wealth creators -- who must be punished and shamed, specifically with a personal income tax rate hiked to a whopping 90 percent for top earners.
Of course, the wealth redistributors in Washington never bear any of the blame for misspending the billions they confiscate. Nearly 100 million Americans participated in dozens of federal food assistance programs in 2014. The General Accounting Office reported last year that $74.6 billion went to food stamps, $11.3 billion went to the national school lunch program, and $7.1 billion went to the WIC (Women, Infants and Children) program, along with $1.9 billion for nutrition assistance for Puerto Rico and $10.7 million for a federal milk program.
But no, it's not the fault of command-and-control bureaucrats and their overseers on Capitol Hill that the War on Poverty and the War on Hunger have failed.
In Sanders' bubble, childhood hunger is the fault of selfish consumers, self-serving entrepreneurs and rapacious retailers who engage in voluntary transactions in a free-market economy. Just as Sanders believes there are "too many" products on the shelves, President Obama recently opined that families of America's top earners in the financial industry "pretty much have more than you'll ever be able to use and your family will ever be able to use."
We need not speculate about whether the wealth-shamers' recipe of less capitalist consumption, fewer private businesses, stifling of entrepreneurship and more government control over goods and services would result in happier citizens and fuller stomachs. In Venezuela, the shelves are unburdened by "too many" deodorants and shoes and too much soap, milk or coffee. Food distribution is under military control. The currency of the socialist paradise just collapsed on the black market by 30 percent.
Here in America, dozens of private household goods companies make billions of dollars selling scented, unscented, quilted, two-ply, white and colored toilet paper that people want and need. In Sanders' utopia in South America, the government imposed price controls in the name of redistributing basic goods to the poor and seized a toilet paper factory to cure the inevitable shortages. The lines are long. The shelves are empty. The daily battle for subsistence is brutal.
Take it from those who suffer most under the unbridled fulfillment of "you didn't build that" and "you don't need that" radicalism: It stinks.
Source>http://townhall.com/columnists/michellemalkin/2015/05/27/bernie-sanders-foul-socialist-odor-n2004189/page/full
Posted by theodore miraldi at 7:46 AM