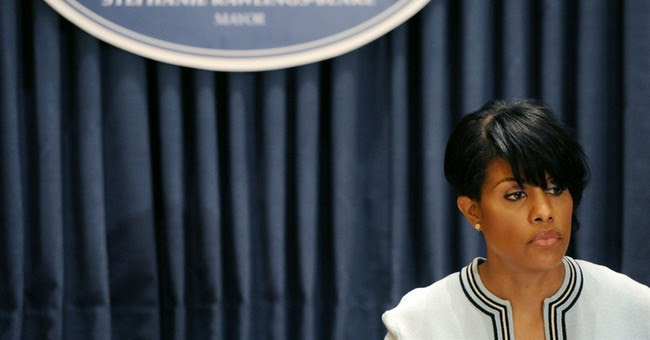 
Conservatives say "you can be somebody." Liberals say "you should hate somebody." The latter mentality is exactly what we've seen play out in Ferguson and Baltimore. Black riots, dead cops at the hands of black youths, thugs memorialized as heroes and our first lady who's grown up privileged, gives a speech at Tuskegee University in front of more privileged blacks as if she just dried off after being hosed down by Democrat Bull Connor. Give me a break! Students who are inheriting a post-civil rights America have been conditioned to believe they're getting a pre-civil rights America thanks to our first black president and first lady.
In 2008 millions of whites cast their ballot for then Sen. Obama, hoping to eliminate racism in America. At the least, they purposed to convince the world they weren't racist and assuage their "white privilege," as taught to them by their liberal professors. In 2016 some of those same voters may stay home, disillusioned that race relations have worsened despite their efforts. Many Americans have grown weary of being penalized over skin color, and I'm not talking about blacks.
Consider the "Bradley effect"-- coined after Los Angeles Mayor Tom Bradley lost his 1982 mayoral race despite being ahead in the polls leading up to the election. For fear of retribution from the politically correct media, white voters told pollsters they were either voting for the black candidate or undecided. As always, the ballot box was honest. They didn't re-elect Tom Bradley! They lied! In hindsight, a presidential candidate that overplays the race card in 2016 outside of predominantly black districts could surge in the polls just to lose the election by disenfranchising white constituents.
Democrats hoped Obama's presidency would transcend race and politics. It hasn't! Not because Americans are racist or partisan but because our president is! What is often forgotten is that by 2012 nearly seven million fewer voters chose President Obama. I'm not B.B. King, but the thrill was gone! Under Obama's watch nearly 93,000,000 workers are out of the labor force. Food stamp recipients have nearly tripled since 2000, growing from approximately 17 million recipients to approximately 47 million today. If ISIS is indicative of Obama's foreign policy, it's fair to say "black riots" are indicative of his domestic failure. Obama has set race relations back so far even hippies are hoping to move on. This will be a difficult task for the DNC to overcome, particularly if Republicans frame the Democrats' next nominee as Obama's third term.
White Democrats voted for hope and change, not "black riots" and declining property values.
Baltimore is a microcosm of "progressivism" at its finest. School funding is third in the nation. One of five jobs are government jobs. Fifty percent or more of law enforcement is black. Yet crime is high, economic opportunity is low and its future is bleak. Marilyn Mosby, Baltimore's incompetent state attorney, is building a case against the officers she alleges are responsible for Freddie Gray's death for political expediency. Andrew McCarthy said it best in his column "Beware Baltimore's 'No Justice, No Peace' Prosecutor.":
"Competent prosecutors charge crimes only when there is evidence sufficient to prove that specific laws have been broken. A government lawyer who publicly asserts that her case was brought for the purpose of dousing inflamed passions, satisfying political agitators, or even easing real suffering undermines the prosecution. It's not just the wrong thing to do; it's the dumb thing to do."
Guilty verdicts are unlikely, therefore more rioting is likely! Baltimore residents will have no one to blame but Mayor Stephanie Rawlings-Blake, Marilyn Mosby and their ideology that seeks to agitate rather than unify.
Americans nationwide watched as Baltimore police stood at the mercy of protestors who destroyed property and physically assaulted officers. Imagine if the roles were reversed. If cops marched shouting "no justice, no peace" and sitting by in their squad cars as robbers, looters, murderers and drug dealers roamed the streets free of consequence. Citizens of Baltimore would be rightfully outraged. They'd demand cops begin policing their community. As silly as this notion sounds, this is effectively what happened when Mayor Blake demanded her cops stand down.
Black progressives are working hard to make the white male an endangered species. Riots like Ferguson and Baltimore have only highlighted that fact. But recall the "Bradley effect."
In the privacy of a voting booth those that perceive they're being bullied or mistreated by politicians plot their revenge. Had the whites that voted for President Obama known that he'd turn the race card on them he'd still be a senator. Likewise, other race-baiters hoping to ascend to higher offices could be in for a rude awakening in 2016.
Source>http://townhall.com/columnists/carljackson/2015/05/21/black-racism-fatigue-will-hurt-democrats-in-2016-n2001567/page/full
Posted by theodore miraldi at 10:15 AM