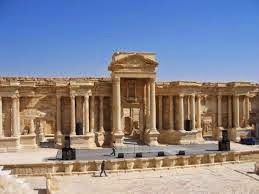 By Loveday Morris
BAGHDAD — Concerns for one of the Middle East’s most renowned archaeological sites deepened Thursday after Islamic State militants swept into the historic Syrian city Palmyra, urging residents over mosque loudspeakers to turn in regime collaborators and army soldiers.
The capture of Palmyra, about 130 miles northeast of Damascus, marks the Islamic State’s second significant strategic gain in the past week following the fall of the Iraqi city of Ramadi west of Baghdad.
The Syrian advance has added resonance because Palmyra’s ancient ruins — a UNESCO World Heritage site — fell under Islamic State control as the militants consolidated their grip on the nearby modern city.
There were no immediate reports of damage to the historic site, which includes the remains of temples and artifacts that trace the area’s rich legacy as a commercial and political crossroads dating back 2,000 years.
But Islamic State militants have destroyed pre-Islamic treasures in northern Iraq, including other UNESCO sites such as Hatra and Nimrud. A general view taken on May 18, 2015, shows the ancient Syrian city of Palmyra, shortly before it was seized by  Islamic State fighters. (SANA/AP)
[Ex-CIA analyst: Culture also a victim of the Islamic State]
Activists and Syrian state media said pro-government forces had withdrawn from Palmyra after a week-long assault by the militants. The city’s notorious Tadmor Prison, where scores of anti-regime political prisoners are incarcerated, was also in the extremist group’s hands, activists said.
The gain consolidates the Islamic State’s control closer to the Syrian capital and a swath reaching east toward border with Iraq, where militants seized Ramadi on Sunday. Advances by the Islamic State demonstrate the group’s ability to continue to take territory, despite recent assertions by American officials that it remains largely on the defensive after 10 months of U.S.-led airstrikes.
Irina Bokova, ­director-general of UNESCO, said she was “ deeply concerned” about the situation at the Palmyra site, which rose to prominence as a wealthy caravan oasis in the 1st century A.D. After some 2,000 years, the striking Roman colonnades still stand majestically in the desert.
[Why the ancient city of Palmyra matters]
Since its advances in Iraq last summer, the Islamic State has laid waste to sites dating to antiquity, branding them heretical according to its interpretation of Islam. Its fighters have smashed statues and buildings and sold off ancient artifacts that were small enough to be smuggled. The area surrounding Palmyra is also rich in gas and oil, potentially boosting the Islamic State’s wealth. The “vast majority” of the city including the ancient ruins are now under Islamic State control, said a Syrian activist who is in contact with sources in the area. He spoke on the condition of anonymity for security reasons.

+-
Terms & Feedback
There were conflicting reports as to whether Islamic State militants had actually entered the historic site, however.
As of the early hours of Thursday, the archaeological site was empty and had not been damaged, the activist said. Islamic State militants “just don’t have time for now,” he added. “They are more into the prison and the stocks of the missiles and other military facilities.”
Militants were also focusing on rounding up regime soldiers who were holed up in the city. On Thursday morning, mosques announced that families hiding soldiers should turn them over to Islamic State authorities.
However, Rami Abdurrahman, head of the Britain-based Syrian Observatory for Human Rights, said the militants overran the historic site shortly after midnight on Wednesday.
[Islamic State ravage of ancient site a “war crime”]
Clashes were continuing at the city’s military intelligence headquarters, while Islamic State fighters had surrounded the military airport and seized several weapons depots, the Syrian activist said.
An activist in Palmyra, who for security reasons uses the pseudonym Ahmed al-Homsi, said the Islamic State also released prisoners from Tadmor. The Syrian government’s warplanes were carrying out airstrikes Wednesday night, he said.
The capture of Palmyra, home to roughly 50,000 people, is one of the Islamic State’s first significant advances directly against President Bashar al-Assad’s forces. Islamic State fighters had previously won ground in Syria mainly from rebel groups.
Pro-government defense units withdrew from Palmyra after evacuating civilians following an attack during which Islamic State militants attempted to enter the city’s archaeological sites, the state-run Syrian Arab News Agency reported.
However, activists denied that civilians were evacuated and said that even army soldiers were left behind as Islamic State advanced. Hundreds of ancient statues were removed from Palmyra for safekeeping as the militants closed in, Syrian officials told the news agency. Pro-government forces largely pulled back 25 miles southwest to Sawwana, activists said.
Source>http://www.washingtonpost.com/world/concerns-grow-for-fate-of-palmyra-one-of-the-middle-easts-most-renowned-sites/2015/05/21/45e47ec2-ff8b-11e4-805c-c3f407e5a9e9_story.html?hpid=z1
Posted by theodore miraldi at 11:05 AM