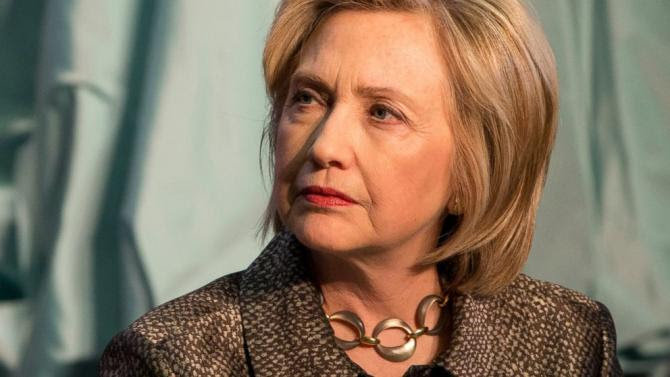 that “titles are just titles” and Hillary Clinton’s “track

record” includes the collapse of the Middle East and the

Reports” on MSNBC.
Fiorina said, “I come from a world where titles are just

titles, and talk is just talk. It’s only in politics where titles

and words mean a lot. In the rest of the world, it’s actually

about what have you done, actions speak louder than

words. People want to know are your words and your

I think when 82% of the American people now believe that

there is a professional political class more interested in

preserving its own power and privilege than it is in serving

the American people, people expect basic questions to be

asked of anyone running for president. ‘What have you

answer questions?'”
Fiorina said that while Hillary Clinton has said some

“wonderful things” as Secretary of State, “it’s also true that

as Secretary of State she took women’s rights and human

rights off the table for discussion with China. It’s also true

as Secretary of State that she called Bashar al-Assad a

positive reformer. It’s also true that in 2011, when she was

Secretary of State, she said that Iraq was a free, stable,

sovereign nation. And now we have a nation falling apart,

said that she could reset our Russia — our relationship with

Russia and Vladimir Putin is on the march. So, I think all of

those things I just named go fundamentally to what is her

track record.”
After host Andrea Mitchell stated, “You could also argue that

a lot of Republicans in the White House and in Congress

that’s right. And by the way, every single Republican

candidate has been asked about their vote for the war in

Iraq. The one person who’s not been asked  that question

, because she won’t answer the question is Hillary Clinton

to fall apart, was not the Republican nominees or —

been asked yet. What would she do now in Iraq?”
Fiorina then outlined her ISIS strategy, saying, “I would do

very specific things. First, instead of having a Camp David

conference to talk our Arab allies into a bad deal with Iran,

Arab allies about how we can support them to fight ISIS. Let

me give you very specific examples. The Kurds have been

asking us to arm them for three years, we still have not. The

Jordanians have been asking us to provide them with

bombs and materiel. We know King Abdullah of Jordan, I’ve

known him for many years. He took the appropriate

leadership steps when a Jordanian pilot was burned alive.

He was here in this country asking us for bombs and

materiel, we haven’t provided him with any of them. He’s

now looking to China for that. The Egyptian president, a

very brave and pious Muslim, who has said there is a

cancer in the heart of Islam, has asked us to share

intelligence. We are not. The Turks have asked us to help

them topple Bashar al-Assad, we are not. There are a whole

know this is their fight, and we’re not doing any of them.”
The interview concluded with her being asked about equal

was passed guaranteeing that if a woman is being

discriminated against in the workforce purely because of

her gender she should take every advantage of the law. But I

also know this — a seniority system, which exists in the

federal government, that allows a man to watch

pornography all day long in the federal government,  and

earn the same pay, pension, and benefits as a woman sitting

next to him trying to do a good job, that is not equal pay for

equal work. And the seniority system, and the federal

government that promotes that seniority system, and the

unions, as well, they’re not willing to talk about that. So

, before the federal government or Hillary Clinton, who, by

her own measures, is not paying women equally in her own

office, nor is President Obama, before they lecture others,

maybe they ought to look into their own offices, or look into

the seniority system in the federal government.”
Source>http://www.breitbart.com/video/2015/05/27/fiorina-titles-are-just-titles-hillarys-track-record-is-me-collapse-and-the-russian-reset/
Posted by theodore miraldi at 4:14 PM