Police in riot gear made 71 arrests Saturday as protesters stormed the streets of Cleveland after a judge found a white city police officer not guilty in the deaths of two unarmed black suspects killed in a barrage of police gunfire.
The protesters gathered in downtown Cleveland and west side neighborhoods after the acquittal of patrolmen Michael Brelo.
About 150 protesters marched down the middle of downtown Cleveland, temporarily blocking intersections as they chanted anti-police slogans.
The protesters, who were marching behind a large banner that said "Stop murder by police," passed by large crowds leaving a Cleveland Indians game and made downtown vehicle and pedestrian traffic even more congested.
Police tweeted they arrested a male for assault after he threw an object through a window, and the Northeast Ohio Media Group reported that three people were arrested near the Quicken Loans Arena , while officers showed protesters cans of pepper spray as they approached those being arrested. Some police were wearing riot gear.
An Ohio judge said in his written verdict delivered to a crowded courtroom Saturday that Brelo’s actions in the November 2012 shootings were justified because he believed that someone in the car containing Timothy Russell and Malissa Williams fired shots at police in the beginning, middle and end of the chase. Brelo is still on unpaid suspension while officials consider administrative charges against him.
The Department of Justice said Saturday it plans to "review all available legal options."
"We will now review the testimony and evidence presented in the state trial" to determine if "additional steps are available and appropriate," the department said after the acquittal of Brelo on voluntary manslaughter charges.
Vanita Gupta, head of the department's civil rights division said the review is separate from its efforts to resolve a pattern of civil rights violations at the Cleveland police department. A report in December outlined a string of examples of excessive force, including officers who unnecessarily fired guns, hit suspects in the head with weapons, and punched and used Tasers on people already handcuffed.
The acquittal came at a time of nationwide tension among police and black citizens punctuated by protests over deaths of blacks at the hands of white officers -- and following a determination by the Justice Department that city police had a history of using excessive force and violating civil rights.
Before issuing his verdict, Cuyahoga County Common Pleas Judge John O'Donnell noted the recent unrest in Ferguson, Missouri, and Baltimore over the deaths of black suspects but said he would not "sacrifice" Brelo to an angry public if the evidence did not merit a conviction.
"Guilty or not guilty, the verdict should be no cause for a civilized society to celebrate or riot," he said. 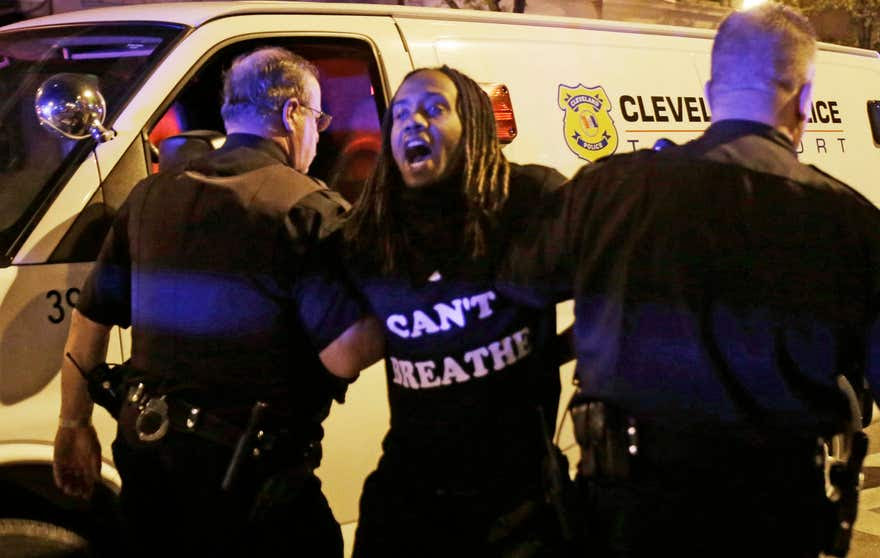 Expand / Contract
May 23, 2015: A protester is arrested after the acquittal of Michael Brelo, a patrolman charged in the shooting deaths of two unarmed suspects. (AP)
Community and city leaders braced for the possibility of unrest in response to the verdict, which came as investigators work toward making a decision on whether charges will be filed in the death of a black 12-year-old boy carrying a pellet gun who was shot by a white rookie officer late last year.
Shortly after the verdict was reached, about 30 sheriff's deputies stood in front of the courthouse bearing clear shields as protesters with bullhorns chanted. One demonstrator bowed his head with hands folded in front of the phalanx of deputies, praying in silence.
The deputies then moved inside the entrance of the justice center, and the plaza in front of the building was soon cordoned off.
Brelo, 31, faced as many as 22 years in prison had the judge convicted him on two counts of voluntary manslaughter.
O'Donnell spent nearly an hour summing up his conclusion, an involved explanation that included mannequins marked with the gunshot wounds that the two motorists suffered on Nov. 29, 2012.
O'Donnell said that while Brelo likely fired fatal shots in the final seconds of the encounter in a school parking lot, other officers fired fatal shots as well.  Brelo could have been convicted of lesser charges, felonious assault, but O'Donnell determined his actions were justified by the circumstances of the chase, which included reports of shots being fired from the beat-up Chevy Malibu that Timothy Russell was driving.
Brelo sat stoically throughout the four-week bench trial, his parents often in the courtroom. Thirteen officers fired at a car with Russell and Malissa Williams inside after a long, high-speed chase, but only Brelo was charged criminally because prosecutors said he waited until the car had stopped and the pair no longer a threat to fire 15 shots through its windshield while standing on the hood of the car.
Russell, 43, and Williams, 30, were each shot more than 20 times. While prosecutors argued they were alive until Brelo's final salvo, medical examiners for both sides testified that they could not determine the order in which the fatal shots were fired.
Brelo has been on unpaid leave since he was indicted May 30, 2014.
The chase and shooting began when Russell's car backfired as he sped past Cleveland police headquarters. Police officers and bystanders thought someone inside had fired a gun. More than 100 Cleveland police officers in 62 marked and unmarked cars got involved in a pursuit that saw speeds reach 100 mph during the 22-mile-long chase.
Authorities never learned why Russell didn't stop. He had a criminal record including convictions for receiving stolen property and robbery and had been involved in a previous police pursuit. Williams had convictions for drug-related charges and attempted abduction. Both were described as mentally ill, homeless and addicted to drugs. A crack pipe was found in the car.
The shooting helped prompt a months-long investigation by the Justice Department, which concluded last December that the Cleveland police department had engaged in a pattern and practice of using excessive force and violating people's civil rights. The city and DOJ are currently negotiating a reform-minded consent decree that a federal judge will approve and independent monitors will oversee.
Ohio Attorney General Mike DeWine at the conclusion of a probe by the state Bureau of Criminal Investigation said there had been a systemic failure within the command and control structure of the Cleveland police department during the chase. BCI turned over its findings to the Cuyahoga County prosecutor's office, which presented evidence to a grand jury that led to Brelo's indictment.
The grand jury also charged five police supervisors with misdemeanor dereliction of duty for failing to control the chase. All five have pleaded not guilty. No trial date has been set for the supervisors.
Two years after the deaths of Russell and Williams, a white officer fatally shot 12-year-old Tamir Rice in a Cleveland park after police received a report of a man with a gun. Surveillance video showed the officer firing on Rice within two seconds of his patrol car skidding to a stop next to him.
In addition to the Rice case, the county prosecutor's office is looking into the death of a black woman who died in police custody while lying face first on the ground in handcuffs. The family of Tanisha Anderson, 37, has sued the city of Cleveland and the two police officers who subdued her. They say she panicked Nov. 12 when officers put her in the back of a patrol car after they'd responded to a call about Anderson having a mental health crisis.
Russell's sister, Michelle, said Brelo would ultimately face justice, despite the judge's decision. The city of Cleveland has paid the families of Russell and Williams a total of $3 million to settle a federal civil rights lawsuit.
"He's not going to dodge this just because he was acquitted," Michelle Russell said. "God will have the final say."
The Associated Press contributed to this report.
Source>http://www.foxnews.com/us/2015/05/24/several-arrests-made-as-protesters-flood-cleveland-streets-after-officer/
Posted by theodore miraldi at 9:31 AM