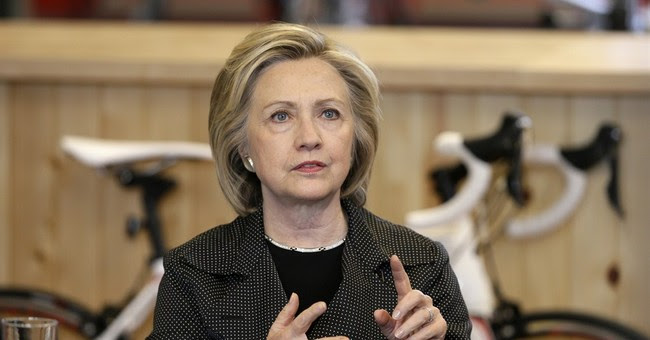 Donald Lambro
WASHINGTON - This is a hard time to be a Democrat, especially a Democratic presidential candidate who's been a loyal, down-the-line supporter of Barack Obam
Hillary Clinton, the clear front runner for her party's 2016 nomination, is still struggling to figure out how to handle a messy situation where polls say a majority of Americans aren't happy with the way Obama is handling the nation's business.The Gallup Poll reported Tuesday that 51 percent now disapprove of the job he is doing, versus only 44 percent who approve.Presidential elections are by their very nature all about change. But how does Clinton campaign for change when she has been largely in lock-step with Obama's policies?So far she has not ventured into what is shaping up to be very dangerous territory, clinging to a soft campaign of platitudes and generalities that reveal very little if anything about what she would change as president.Fix a woefully underperforming economy? That would mean sharply criticizing an economic climate that troubles a majority of Americans. She's not going there.Obama's failed national security policies in the face of a far more lethal terrorist menace that intelligence agencies say is plotting to attack our homeland?But as Obama's secretary of State, she supported those policies during her controversy-filled, four-year tenure.She would have zero credibility criticizing those policies now, after being one of the president's staunchest allies -- not only in his first term but since then.So far, her campaign strategy has been to avoid saying anything about the policies that haven't worked and have made the world a far more dangerous place.As secretary of State, she enthusiastically promoted the president's push for a free-trade agreement in Asia, telling the U.S. Chamber of Commerce in 2011 that the pact "will bring together economies from across the Pacific."It would "create a new high standard for multilateral free trade," she gushed.Even after she left the Obama administration, she was singing the trade pact's praises. It was "the gold standard in trade agreements," she said in a speech in Australia in November 2012.Now, as the Trans-Pacific Partnership trade deal faces an obstacle course from Democrats in Congress and from organized labor, Clinton isn't saying much about the trade agreement.As the trade bill fight grew hotter earlier this month, the Clinton campaign felt compelled to say something about the high-level issue. So it trotted out her spokesman who said any trade agreement must "raise wages and create more good jobs at home."Well, of course, but that doesn't address the much more complicated economic issues at stake here. Still, it kept Clinton out of trouble and out of the politically risky debate that was brewing on Capitol Hill.Needless to say, the White House isn't pleased that she was unwilling to express a more muscular position on one of the biggest economic growth issues facing our country right now."She can't sit on the sidelines and let the president swing in the wind here," House Speaker John Boehner said on NBC's Meet the Press.But Her Royal Highness can and did, sending a clear message to the Oval Office that virtually said, don't expect any support from me on any controversial issue.Apparently, Clinton thinks she can run for and win the presidency without saying much, or at least anything that will get her into political trouble with Democrats and the party's powerful special interests.Anyone who has been following her activities since she announced her candidacy must be bewildered by her low-key, obsessively-secretive, tightly-controlled, answer-few-if-any-questions campaign.Her early appearances in New Hampshire, Iowa and elsewhere have been before very small groups of carefully selected voters where she has avoided hard questions.The rare times she has deigned to take questions from the campaign news media, they have been limited to just a few inquiries, with brief replies, then abruptly ended.Last week when the State Department began releasing her secret e-mails related to the deadly terrorist attacks in Benghazi, Libya, written on her private computer during her secretaryship, she took just a few questions, saying only that she was glad the e-mails were coming out. Then she turned and left.But what about the fact that she alone, or her attorneys, decided which e-mails would be made public after deleting the ones she alone determined were private and personal and none of the public's business?I've covered a lot of news conferences over more than four decades of following presidential campaigns. And with few exceptions they have for the most part given the press plenty of opportunity to question the candidate.That's not only good for the candidate but it's also good politics. It sends a reassuring, confident message that the candidate has nothing to hide and is able to deal with any question or issue that may come up.Clinton's been sending a disturbing message that she has a lot to hide, that she's unprepared to deal with difficult questions about Obama's failed policies, and, even worse, doesn't feel she is required to do so.She may get away with evasive responses or even no responses at all for awhile. But eventually the press will turn on her.When Fox News reporter Ed Henry recently asked her in Cedar Falls, Iowa when she would take questions from the news media, she answered sarcastically, "I'll have to ponder it, but I'll put it on my list for due consideration."Then there are the questions about unreported money to the Clinton foundation after Hillary's State Department cleared a uranium land deal that led to a $500,000 check from Moscow bankers for a speech by Bill Clinton.Shady, big money schemes like this demand questions, but maybe that's why Hillary shies away from prying news conferences and keeps her answers brief and vacuous.