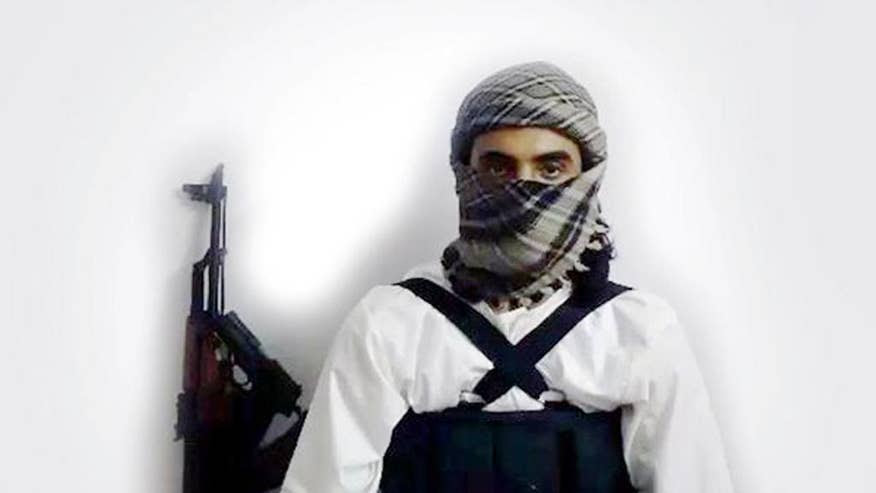 This image taken from a militant website associated with Islamic State extremists, posted Saturday, May 23, 2015, purports to show a suicide bomber identified as a Saudi citizen with the nom de guerre Abu Amer al-Najdi who carried out an attack on a Shiite mosque. The Islamic State group's radio station has claimed responsibility for that suicide bombing Friday, warning that more "black days" loom ahead for Shiites. The attack killed at least 21 people and wounded dozens in the village of al-Qudeeh in the eastern Qatif region as worshippers commemorated the birth of a revered saint. The Arabic bar below reads: "Urgent: The heroic martyr Abu Amer al-Najdi, the attacker of the (Shiite) temple in Qatif." (Militant photo via AP) (The Associated Press)
CAIRO –  The Islamic State group claimed responsibility for a suicide bombing at a Shiite mosque in Saudi Arabia, warning that more "black days" loom ahead in a direct challenge to the rulers of the Sunni kingdom.
Friday's attack was the kingdom's deadliest militant assault since a 2004 Al Qaeda attack on foreign worker compounds, which sparked a massive Saudi security force crackdown.
However, this Islamic State attack in the village of al-Qudeeh in the eastern Qatif region targeted Shiites, whom ultraconservatives in Saudi Arabia regularly denounce as heretics.
The statement on the Islamic State group's al-Bayan radio station, read aloud Friday night and posted Saturday morning to militant websites associated with the extremists, identified the suicide bomber as a Saudi citizen with the nom de guerre Abu Amer al-Najdi. The station also identified the attack as being carried out by a new Islamic State branch in "Najd Province," referring to the historic region of the central Arabian Peninsula home to the Saudi capital, Riyadh.
The mosque attack killed at least 21 people and wounded 81, the official Saudi Press Agency reported.
The Islamic State group -- formerly Al Qaeda's branch in Iraq which broke away and overran much of that country and neighboring Syria -- has become notorious for its attacks on Shiites, including a deadly Shiite mosque bombing in the Yemeni capital, Sanaa, that killed more than 130 people. It was blamed for the killing of eight Shiites in a mosque shooting in eastern Saudi Arabia in November.
The al-Bayan message warned Shiites of coming "black days that will hurt you," pledging to expel all Shiites from the Arabian Peninsula.
The attack comes as Saudi Arabia is part of a U.S.-led coalition targeting the Islamic State group. In late April, Saudi officials arrested 93 people they said were involved in an Islamic State plot to attack the U.S. Embassy and other targets.
There already are heightened Sunni-Shiite tensions in the region as Saudi Arabia and Shiite power Iran back opposite sides in conflicts in Syria and Yemen.
Source>http://www.foxnews.com/world/2015/05/23/islamic-state-radio-station-claims-saudi-mosque-attack-warns-black-days-for/
Posted by theodore miraldi at 10:53 AM