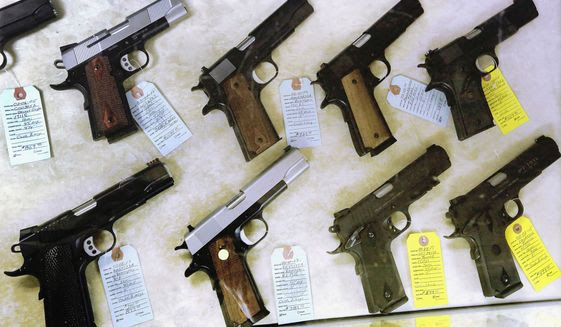 D.C. officials say the opinion issued Wednesday by a Texas federal judge that found unconstitutional a federal ban on the direct sale of handguns
from federal firearms dealers to out-of state residents has limited applicability at this time. (AP Photo/Seth ... more >
By Andrea Noble

A federal judge on Thursday denied a short-term stay on a decision that blocked the District from enforcing a key provision of its restrictive concealed-carry laws — prompting the city to notify gun owners who had been denied a carry permit that they now can obtain one.
U.S. District Judge Frederick J. Scullin Jr. left open the possibility the District could obtain a stay pending appeal of his previous ruling, which called the city’s requirement that gun owners demonstrate a “good reason” to obtain a permit unconstitutional. He set a hearing on the matter for July 7.
In the meantime, the ruling means the Metropolitan Police Department may end up issuing concealed carry permits to applicants who previously had been denied because they could not demonstrate they face a specific threat of injury or harm.
The gun owners who brought the case against the city received phone calls from MPD on Thursday advising them to come to the department’s Firearms Registration Section for approval of their concealed carry permits, said Alan Gottlieb, vice president of the Second Amendment Foundation, which backed the lawsuit.
“It’s our understanding now that they’ve at least called our plaintiffs and said come get your permits,” Mr. Gottlieb said.
An police department spokeswoman did not immediately respond to questions about how the department is handling pending and denied applications.
According to Mr. Gottlieb, the decision is an about-face from the department’s stance last week, when officials told applicants that the department would take extra time to review applications based on Judge Scullin’s May 18 ruling.
In a letter to one such applicant, police Sgt. Colin Hall of the firearms section wrote that although the department already had taken the allowed 90 days to review the permit application, it would “invoke the additional 90 day period” allowed under D.C. law to process the application.
D.C. lawmakers drafted the concealed-carry laws last year to comply with a July ruling by Judge Scullin that overturned the District’s long-standing ban on the carrying of firearms in public.
The legislation created a process by which D.C. residents and non-residents could apply for concealed-carry permits by showing proof that they need to carry a weapon for self-defense.
Metropolitan Police Chief Cathy L. Lanier was given the authority to decide who met the criteria.
In court filings arguing for the stay, D.C. Attorney General Karl Racine wrote that requiring the city to move forward with the issuance of permits would prove problematic if the ruling were later revoked.
“Granting an administrative stay would minimize unnecessary disruption and confusion,” Mr. Racine said, noting that if a later ruling were to overturn the injunction, any concealed-carry permits issued during that time might have to be withdrawn.
The police department had received 107 concealed carry applications as of May 9, including 52 from D.C. residents and 55 from non-residents. The department reported denying 42 applications and approving 26. The remainder were either withdrawn or pending.
Source>http://www.washingtontimes.com/news/2015/may/28/judges-ruling-allows-concealed-carry-for-dc-gun-ow/#ixzz3bTlmtcdc
Posted by theodore miraldi at 7:35 PM