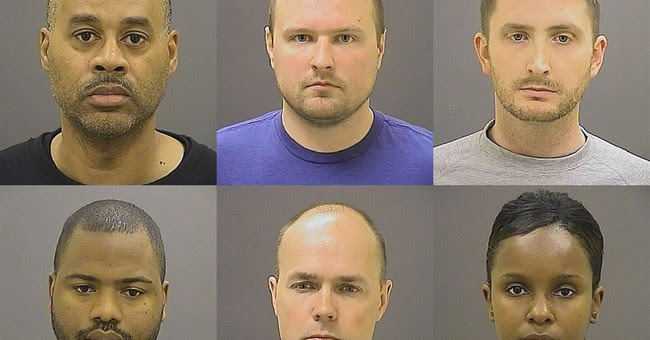 
A Baltimore grand jury handed down indictments against six police officers Thursday in the death of Freddie Gray while in police custody, the latest chapter in a saga that captured national attention when riots erupted last month following Gray's funeral. Gray's death doesn't lend itself easily to simplistic racial explanations, which were seized upon in other highly publicized deaths of black men in police custody over the past year, including the deaths of Michael Brown in Ferguson, Mo., and Eric Garner in New York City.
Three of the accused officers are white; three are black. Five are men, and one is a woman. The police commissioner, whose department is now under scrutiny by the Justice Department for potential civil rights violations, is black. So, too, are the mayor and the city prosecutor bringing the charges.
But if Baltimore's political leaders are mostly black and its police force reflects the racial composition of the city, why is there such a sense of racial grievance among its black residents, especially those who live in poor neighborhoods in West Baltimore?
Since the rioting, Police Commissioner Anthony W. Batts said this week that police are having difficulty stopping the violence that afflicts West Baltimore. "Officers tell me and their supervisors, any time they pull up to respond to a call, they have 30 to 50 people surrounding them," Batts told The Baltimore Sun. The situation is especially dangerous given the crime stats in Baltimore and the Western District, a 3-square-mile area that is among the city's most violent areas and was the scene of Gray's arrest and the riots that followed his death.
Homicides in Baltimore are up more than 40 percent in 2015 over the previous period last year. The city has experienced 100 homicides to date, compared with 71 at the same point last year -- a trend that bucks a national decrease in violent crime in most major cities in recent years. The overwhelming majority of these homicides -- 87 of the 100 -- involved a black victim, 80 of whom were males. And the largest number, 22, occurred in the Western District -- that's more than all the homicides in the district in all of 2014. Nonfatal shootings in West Baltimore were up 175 percent year-over-year, according to the Sun.
But while crime is up dramatically, arrests are down. Arrests in the city were 40 percent lower in the weeks following Gray's death and the riots than the same period in the two previous years, according to an analysis of police data by The Wall Street Journal. Even before Gray's death, arrests in Baltimore were down 22 percent in the first three months of 2015 compared to the same period in 2014.
What happened to Freddie Gray in the back of a police van on April 12 was a terrible shame. Thrown into the back of the van, handcuffed and later shackled but unrestrained, he sustained injuries to his spinal cord that left him dead seven days later. A jury will decide the evidence against the accused police officers in Gray's death -- but none of us should presume to know at this point whether they are guilty as charged.
Yes, Gray's life mattered. Black lives matter, as protesters remind us following every such incident involving the death of a black man at the hands of police.
But so, too, should the 87 black lives (and 13 others) lost on the streets of Baltimore this year. By focusing almost all of our national attention on the horrific death of one black victim while in police custody, we avoid the larger problem of violence within the black community. Worse, by making the police out to be the greatest threat to the black community, we risk allowing criminals to go unchallenged within those communities.
Justice for Freddie Gray would best be served by better policing in the neighborhood where he lived -- not by less policing.
Source>http://townhall.com/columnists/lindachavez/2015/05/22/justice-for-freddie-gray-n2002841/page/full
Posted by theodore miraldi at 11:10 AM