Krauthammer on Paul: ‘His ignorance really astonishes me’ 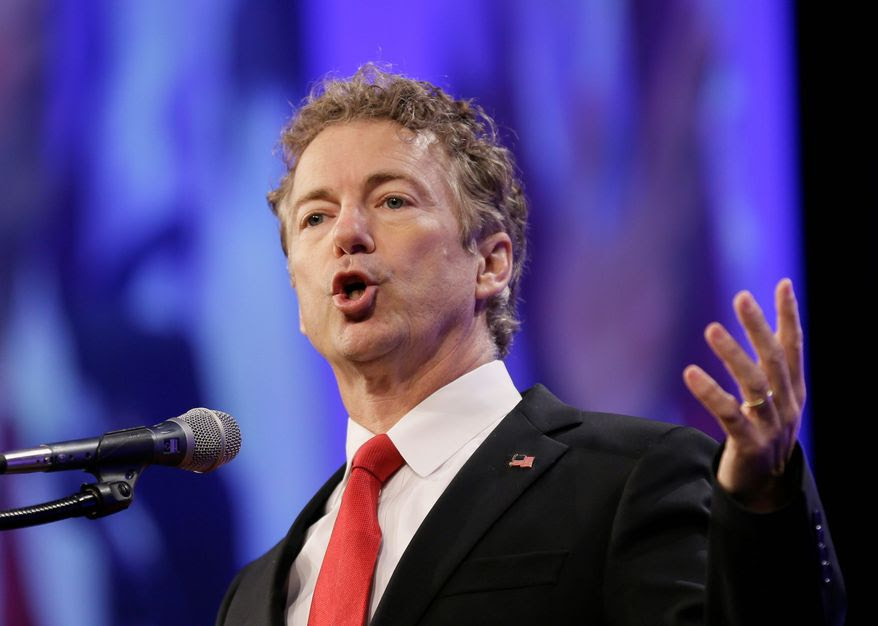 Photo by: Charlie Neibergall"ISIS exists and grew stronger because of the hawks in our party who gave arms indiscriminately," said Republican presidential hopeful Rand Paul. "And most of those arms were snatched up by ISIS." (Associated Press) ** FILE **
By Kellan Howell

Conservative pundit Charles Krauthammer blasted GOP presidential candidate Rand Paul on Friday over recent comments he made regarding the Islamic State.
“Sometimes Ron Paul’s ignorance really astonishes me,” Mr. Krauthammer told radio host Hugh Hewitt, before joking that he made a Freudian slip.
Mr. Paul came under fire from other conservatives this week after he said that “hawks” in the Republican party had been responsible for the rise of the Islamic State terrorist group.
SEE ALSO: Santorum: Would expect Rand Paul’s Islamic State comments from ‘maybe Bernie Sanders’
The Kentucky senator claimed that by toppling dictators like Bashar al Assad in Syria, Republicans facilitated the rise of the militant group.
“Is he aware of the fact that until this week, or actually it was last week, when ISIS took over Palmyra, ISIS had not once taken a city or a town from the Assad government?” Mr. Krauthammer said, Mediaite reported Friday.
“He doesn’t even understand that ISIS and the Assad government — until last week when ISIS grew so strong that it could be bold and invade essentially Assad territory — Assad and ISIS has had this cozy, tacit, non-aggression agreement where they essentially split the country in two and Assad relied onISIS to swallow up all of the anti-Assad opposition,” Mr. Krauthammer added.
Mr. Paul has also accused the U.S. of arming militants “indiscriminately” as they continue to seize weapons and supplies from Iraqi forces.
But Mr. Krauthammer argued that while arming Iraqi forces is a “misguided” American policy, the solution is not to cease sending all arms.
“I think our policy is misguided to arm the Iraqi security forces, which are unreliable. As our own Secretary of Defense has said, they don’t have the will to fight,” Mr. Krauthammer said, Mediaite reported. “But that’s not our mistake, the big mistake is not that we should be refraining from sending weapons, we should be sending them to the right people, to the Kurds who want to fight and who are pro-American and to the Sunni Anbar tribes — the few remaining right now because it’s so late in the game — who are pro-American and desperate for weaponry to fight off ISIS.”
Source>http://www.washingtontimes.com/news/2015/may/30/krauthammer-blasts-rand-paul-his-ignorance-on-isla/#ixzz3biuzjldz
Posted by theodore miraldi at 9:45 AM