Let's not have a conversation 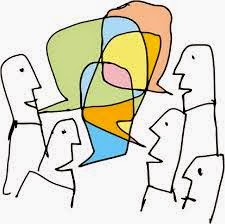 
Everyone -- politicians, community organizers, educators, the MSM and many others -- wants to have a conversation about race, police brutality against blacks, white privilege, and anything and everything else you can name.  You can almost predict when “we need to have a conversation about (you fill in the word)” is going to be said in an interview, speech, etc.  Every time I hear these words I want to throw something at the TV.  The only thing that prevents that action is the three years it took me to pay for my TV.  I didn't have the privilege of being able to loot one so I got it by finding someplace that would give me a 3 year 0% interest payment plan.
Conversations are wonderful things.  People should converse more and text less.  I keep telling my granddaughters that without much success -- they like to text.  You can learn lots from conversations, especially face-to-face ones.
These days “let's have a conversation about...” comes up whenever anything that might be the slightest bit controversial is mentioned.  Starbucks even, for a brief time, wanted their baristas to write the phrase “Race Together” on cups to get conversations going.   But, as the old saying goes, “Talk is cheap,” and somehow none of these conversations take place.  Or, if they do, I haven't heard about it and nothing seems to have changed for the better so maybe we're just in the planning phase of the having a conversation phase.
Why don't we try, instead, looking for solutions?  Less talk, more action.  And by action I don't mean more riots and more looting.  Let's instead be honest about the race problem.   Racism is rampant in this country -- and most of it is blacks hating whites rather than the popular narrative about all those nasty, privileged whites out there hating blacks.  I do know a few white people who, for no reason they can articulate to me, don't like blacks, but if there are white mobs yelling that they hate black people I must have missed them.  The MSM is very successfully covering up for black mobs yelling racial epithets, attacking anyone who isn't black, looting, destroying property, etc.  For lots of examples of this read Colin Flaherty's great new book, Don't Make the Black Kids Angry.  It's great, but spoiler alert, it will make your hair stand on end at times.  And, give you a totally different perspective on racism.
But, but, but, how can this be?  Didn't the former Attorney General, Eric Holder believe that only white people can be racist?  Another popular myth is that only white people can be privileged.  Hooey.
Here's a really novel idea:  Instead of all the highly paid intellectuals sitting around planning on having conversations, let's get some grannies, some granddads, some moms like the one in Baltimore who found her son in a group of rioting people and sent him home, and some working dads to have a conversation.  Bet you would get some solutions from a group like that.  Rip off the blinders and be honest.  Have the conversations instead of just saying we should have one, and look for a solution that doesn't mean demeaning an entire race, or throwing tons of money at something and hoping for a positive result.  Stop talking about talking about something and do something.  If we wait for the politicians to finally have 'the conversation' and find solutions this country that we all love so much will lie in ruins.
Mark Levin is his book The Liberty Amendments suggests several amendments to the Constitution that might help get the country under control and rein in big government.  But, if the government ignores the Constitution as it now stands, why should we have faith that more amendments would make a difference?  Plus, it takes years and years to pass an amendment.  And, as for the politicians, throwing them all out isn't feasible because the establishment of both parties are too firmly entrenched.
Come to think of it, maybe it is time the American electorate had a real conversation on how to take back our country, force our government to abide by the will of the people, and govern this great country as our forefathers wanted when they wrote this in the Declaration of Independence:

"When in the Course of human events, it becomes necessary for one people to dissolve the political bands which have connected them with another, and to assume among the powers of the earth, the separate and equal station to which the Laws of Nature and of Nature's God entitle them, a decent respect to the opinions of mankind requires that they should declare the causes which impel them to the separation.
We hold these truths to be self-evident, that all men are created equal, that they are endowed by their Creator with certain unalienable Rights, that among these are Life, Liberty and the pursuit of Happiness.--That to secure these rights, Governments are instituted among Men, deriving their just powers from the consent of the governed, --That whenever any Form of Government becomes destructive of these ends, it is the Right of the People to alter or to abolish it, and to institute new Government, laying its foundation on such principles and organizing its powers in such form, as to them shall seem most likely to effect their Safety and Happiness. Prudence, indeed, will dictate that Governments long established should not be changed for light and transient causes; and accordingly all experience hath shewn, that mankind are more disposed to suffer, while evils are sufferable, than to right themselves by abolishing the forms to which they are accustomed. But when a long train of abuses and usurpations, pursuing invariably the same Object evinces a design to reduce them under absolute Despotism, it is their right, it is their duty, to throw off such Government, and to provide new Guards for their future security."