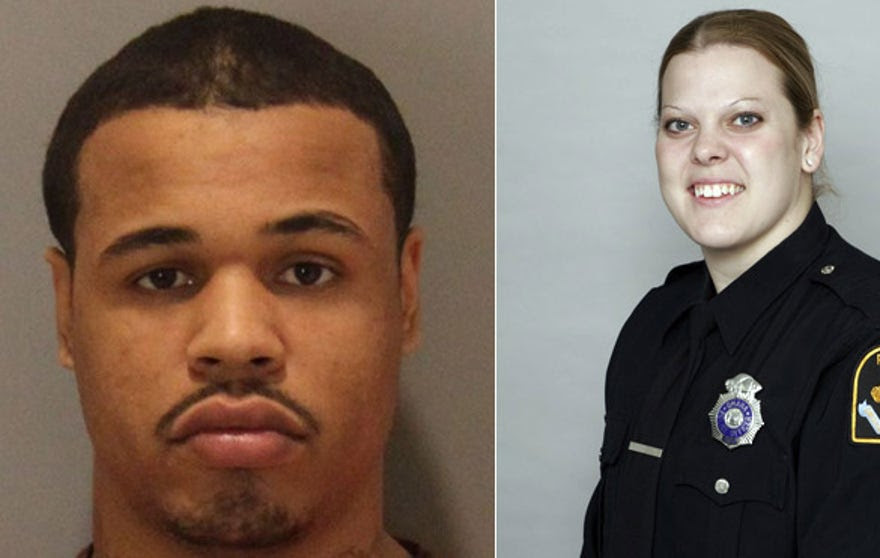 A 29-year-old police officer who had put off maternity leave after giving birth prematurely to a daughter in February was being mourned Thursday, a day after she was gunned down in a shootout with a fugitive.
Kerrie Orozco, the first female officer from Omaha's police department to die in the line of duty, had only recently given birth to a daughter, and also was stepmother to two children ages 6 and 7, according to authorities. She was pronounced dead at Creighton University Medical Center shortly after the 1 p.m. shooting, Police Chief Todd Schmaderer said at a hospital news conference. Schmaderer said the suspect, 26-year-old Marcus Wheeler, also died at the hospital.

"She was a friend, a popular officer."
- Omaha Police Chief Todd Schmaderer

"Officer Kerrie Orozco gave her life for all of us in her service to the Omaha Police Department," said Omaha Mayor Jean Stohert. "She will be remembered and missed as a loving wife, mother, daughter and dedicated officer."
Orozco was part of a fugitive task force looking for Wheeler to serve a felony arrest warrant for an earlier Omaha shooting. As they closed in on the suspect Wednesday afternoon, Wheeler opened fire, prompting police to return gunfire, Schmaderer said.
Orozco, a seven-year veteran of the department who worked in the gang unit, had delivered a premature baby in February, who is due to go home from an Omaha hospital Thursday. She had postponed her maternity leave until the baby was released.
"[The baby] is set to be released from the hospital tomorrow," Schmaderer said, his voice breaking.
It's been more than 10 years since an Omaha officer was killed in the line of duty, when Officer Jason "Tye" Pratt was shot and killed in September 2003, while chasing down a fleeing suspect. The suspect, 21-year-old Albert Rucker of Omaha, was in turn shot and killed by another officer.
Orozcom, who is survived by her husband, Hector Orozco, coached baseball at an Omaha Boys and Girls Club, was a Special Olympics volunteer and served as president of the Police Officers' Ball to benefit the Special Olympics, the chief said. She also took in rescue dogs and was a Girl Scout mentor.
"She was a friend, a popular officer," Schmaderer said. "I just can't even imagine that this has happened. The city of Omaha owes her and her family a debt of gratitude."
Dr. Michael Wagner, a trauma critical care surgeon at the hospital, said his team provided "aggressive care" to Orozco, but she could be revived.
Gov. Pete Ricketts said Orozco's death is a stark reminder of what police officers face every day they go to work.
"[This] tragic news is devastating to the law enforcement community and all Nebraskans," Ricketts said. "We must all ensure that Officer Orozco's sacrifice will never be forgotten."
Source>http://www.foxnews.com/us/2015/05/21/police-officer-suspect-killed-in-omaha-shooting/?intcmp=latestnews
Posted by theodore miraldi at 10:16 AM