Older vets swear by Harley-Davidson; those who served in 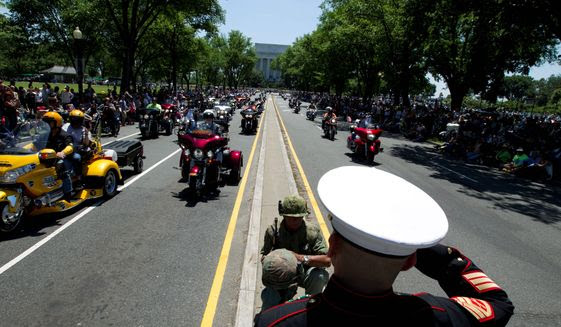 Looking ahead: Marine Tim Chamber and Army veteran Eric Cantu saluted during the Rolling Thunder Ride for Freedom on Sunday. Although the event has grown, the number of riders who fought in Vietnam is dwindling. (Associated Press)

The annual Rolling Thunder Ride for Freedom roared through Washington on Sunday, but organizers of the event that has become America’s largest single-day motorcycle rally are concerned their numbers may dwindle as Vietnam veterans, who form the backbone of the event, grow older.
“It’s going to be interesting to see what we can really bring to the organization in the next five to 10 years,” said Artie Muller, executive director of Rolling Thunder Inc., the nonprofit foundation that sponsors the freedom ride.
“Twenty years ago, we used to look at WWII vets like they were ancient history. Now we are going to be ancient history,” said Mr. Muller, a Vietnam veteran.
SEE ALSO: Companies’ training programs, hiring initiatives help veterans seeking jobs
The Ride for Freedom began in 1988 with roughly 2,500 motorcycles and riders cruising through the nation’s capital on Memorial Day weekend to demand that the U.S. government account for all prisoners of war and soldiers still missing in action from the Vietnam and Korean wars. The event has grown steadily, and 1 million riders and spectators from across the country attended the rally Sunday.
The event is still growing, but mostly because of riders’ supporters and family members. Younger veterans from Iraq and Afghanistan have gravitated toward other organizations.
One of those organizations is Iraq and Afghanistan Veterans of America. Not only are the wars the members fought different from the core Rolling Thunder veterans, but their bikes are too.
SEE ALSO: U.S. Navy chaplain faces Memorial Day special obligation
Harley-Davidson has roughly 52 percent of the U.S. motorcycle market, and almost all Rolling Thunder bikers swear by the iconic American brand. But younger riders, and those who ride for IAVA, have increasingly been choosing Victory motorcycles. Victory motorcycles were introduced in the market in 1998 and were designed to compete directly with Harley-Davidson, with its signature V-twin engines and large size.
Victory has pursued a partnership with IAVA. On Veterans Day last year, Victory said it would donate $500 of each bike sold in November and December to the Iraq-Afghanistan veterans group.
“For our brand they are a young organization, [and] we are a young brand compared to some of our competitors,” said Reid Wilson, marketing manager for Victory.
This year, IAVA riders — on Victory bikes — rode alongside Rolling Thunder for the Memorial Day weekend event. IAVA’s director sees the group as the next generation of riders.
“I have to imagine it would simply be a passing of the torch,” said Matt Colvin, deputy director of strategic corporate and foundation partnerships at IAVA. “Numbers are dwindling, but I don’t think the sentiment will.”
IAVA has started its own parades, with Victory’s help. Last year, more than 700 IAVA veterans and their families marched in the Veterans Day Parade in New York City, where Victory provided about 10 bikes to escort them, and more events are planned to showcase the younger group of veterans.
Although Harley still dominates the road at the Ride for Freedom, Mr. Wilson said Victory’s motorcycles and IAVA’s veterans add a younger element.
Mr. Colvin described a camaraderie between Vietnam veterans and younger veterans who may not have been welcomed home from controversial wars in the Middle East with open arms. That sentiment has brought the two groups together.
“When I came back from my first tour, I was welcomed home with open arms, and the second time I got back, there was no fanfare and it just seemed like no one cared,” Mr. Colvin said. “It’s always the Vietnam vets that truly welcome us back, because they weren’t welcomed home the way they should have been.”
Mr. Colvin, an Air Force veteran who served two tours in Afghanistan after the Sept. 11 terrorist attacks, said he ultimately would like IAVA to integrate with Rolling Thunder.
Rolling Thunder’s Mr. Muller echoed the sentiment and said he hoped more Iraq and Afghanistan veterans would be persuaded to participate with them.
“It’s all a challenge. We hope in the future things are going to get better for Iraq and Afghanistan veterans too and for them to join us. We support the heck out of those men and women,” Mr. Muller said.
Mr. Colvin said that IAVA and Rolling Thunder would continue to work together but that it’s not quite time for the younger veterans to take over.
“It’s definitely not time to hand over the torch. We still have a long way to go before the post-9/11 vets are our main focus here. I do truly believe that there is a next generation that’s going to step up and take over,” Mr. Colvin said.
Source>http://www.washingtontimes.com/news/2015/may/24/rolling-thunder-vietnam-veterans-ride-alongside-th/#ixzz3b9OqHYPo
Posted by theodore miraldi at 7:58 AM