Conservative icon says immigrants and refugees are the foot soldiers 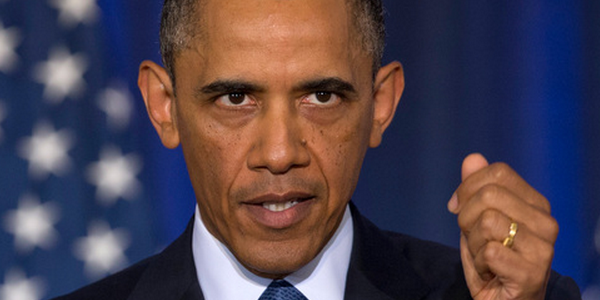 President Obama is instigating a war on the United States, according to longtime conservative icon Phyllis Schlafly. But the president hasn’t dropped a bomb or fired a shot; rather, he has opened the country to tens of millions of immigrants and refugees from all over the world, including from Muslim countries that hate America.
“It is waging war on America,” Schlafly told WND. “Muslims would like to take over the world and establish their caliphate, and Obama has let so many Muslims in. I don’t think he should let any Muslims in this country. There’s no reason why they should come in.”
In a study released last fall, the Center for Immigration Studies reported nearly 300,000 immigrants from predominantly Muslim countries entered the United States from 2010 to 2013. That brought the total number of immigrants from predominantly Muslim countries to 2.4 million, compared to 2.1 million in 2010 and 1.5 million in 2000.
However, simple immigration is not the whole story. Each year, the U.S. also welcomes thousands of refugees – foreigners who seek refuge in the U.S. because they either were persecuted or fear persecution in their home countries.
The State Department, which oversees the refugee resettlement program, aims to resettle 70,000 total refugees a year. It is estimated that roughly 40 percent of all refugees come from predominantly Muslim countries. WND has reported the U.S. has accepted nearly 2 million refugees from Muslim countries since 1992.
The Syrian civil war has created thousands of refugees. The U.S. accepted an initial batch of 9,000 last December, but some resettlement agencies were not satisfied, as they lobbied for the U.S. to take in at least 75,000 Syrian refugees over the next five years.
Steven Camarota, director of research at the Center for Immigration Studies, said Americans should be alarmed about the growing number of Syrian refugees coming to America.
“It’s clear the administration does want to dramatically accelerate immigration from Syria through the refugee program, and that is very troubling because there is no way to accurately vet or carefully vet people for their prior bad acts and associations with terrorism,” Camarota told WND. “The records were always weak, and the regime always corrupt, and now what records did exist are largely gone.”
Schlafly, author of “Who Killed the American Family?,” also is concerned about Middle Eastern refugees who don’t blend in with the American way of life and who may wish America harm.
“Obama is trying to absolutely change America by bringing in people who have no sympathy with what Americans believe,” she declared. “They have no concept of limited government, of constitutional government, of rule of law, et cetera. There’s no reason we should let in people who don’t even like America.”
However, Camarota disagreed that Obama is solely to blame for the massive immigration and refugee resettlement.
“For the most part, our immigration system runs on autopilot, with the acquiescence of both parties,” Camarota said. “It’s just not right to think of this – of mass legal immigration, refugees, family immigration – as being attributable to Obama.
“What I do think you could criticize this administration for, but it’s not clear that other administrations were very different, is incredible foolishness when thinking about these questions.”
Camarota cited the Somali Bantus as an example. He said they were captured in Mozambique and brought to Somalia as slaves, where they reside today as a marginalized ethnic minority. Their kinsmen still live in Mozambique. Camarota argued it would make sense for the U.S. government to help the Bantus return to Mozambique, especially since Mozambique has expressed a willingness to take them back. But instead, the U.S. has resettled them in America.
Camarota also said the U.S. is now accepting refugees from Bhutan who originally come from Nepal.
“It would make so much more sense to help Nepal take those folks back,” he reasoned.
Similarly, Camarota argues the U.S. should help Middle Eastern refugees not by bringing them to the U.S. but by helping other countries in the Middle East find a place for them.
“There’s a cultural affinity there,” he said. “They would be nearby; then they’d be much more likely to return to their homes once the war’s over, rather than coming to the other side of the world here in America.”
It will cost money to help refugees settle overseas, Camarota admitted, but it won’t cost as much as it would to resettle them in the U.S. and hook them on welfare. The research director said refugees have greater access to the American welfare system when they first arrive than ordinary immigrants do.
“Once you have a green card, there’s no meaningful difference between that green card and someone who comes in on family based immigration, except that the refugee has immediate access to all these welfare programs in a way that green card holders are more limited,” he explained.
Camarota concerns himself mostly with the economic questions surrounding immigration, but he said the U.S. government doesn’t do a good job of weaving new arrivals into the social fabric.
“We don’t have any policy for how we successfully integrate and assimilate people into our country,” he said.
Schlafly, as always, is chiefly concerned with how immigrants will fit into the American social fabric.
“Anybody who comes in should have to renounce allegiance to his former country and accept the American way of life,” she declared. “And if he doesn’t want to do that, goodbye! Adios!”