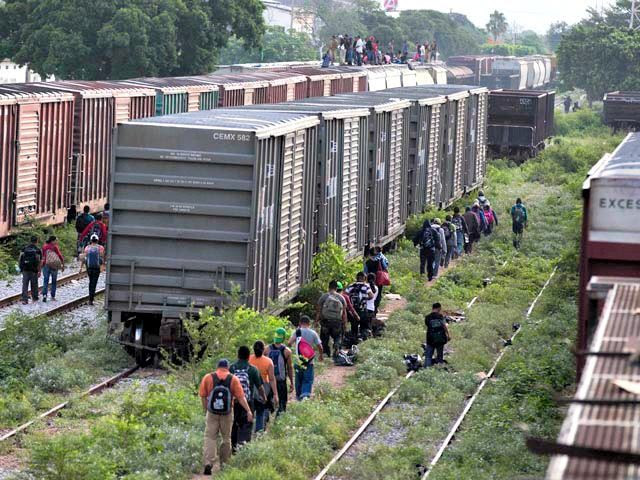 Gangs have shifted away from using freight trains to smuggle children to the U.S.-Mexico border. AP Photo

BY PAUL BEDARD
A crackdown on children attempting to illegally enter the United States by Mexico and other Latin American nations has cut this year's surge to a still-high 30,000, but proponents believe that has made the situation even more desperate for kids, leading to greater crime and deaths.

"Those that are fleeing and trying to get out of their countries are now using even more dangerous tactics with more criminal entities and costing them even more money to get through to safety," said Kimberly Haynes, director of children's services for Lutheran Immigration and Refugee Service.
Baltimore-based LIRS is a key player in caring for unaccompanied children crossing into the United States and advocates for joining the kids with their parents already in the United States. Haynes told Secrets that those they have interviewed this year arrive with horrible stories of how smugglers got them through Mexico and into the United States.
Related article: Courts hands Obama big loss in immigration fight
Worse, she said, many arrive minus a brother or sister, believed to have died in the process.

Gangs have shifted away from using freight trains to smuggle children to the U.S.-Mexico border. AP Photo
"While riding the [illegal immigration freight] train was horrendous in its own right and the journey was already scary enough, being locked in the back of a truck for four days or being smuggled in other ways through the border has only created a heightened amount of risk," Haynes said of how illegals now travel.
"There are several siblings that we know never made it. We don't know what happened to them. One of their brothers made it, one sister made it, there's something, but there's no understanding, no knowledge. They left at the same time, smugglers separated them, nobody knows. So there's a huge population of loss that's happening out of these countries that can't even try to immigrate back if things become stable enough because they're just a lost generation," she said.
"Nobody's heard from them, nobody knows what's happened, so whether they got exploited, killed, went into criminal entities or died in the process, it's an unknown," added Haynes.
Related article: Pelosi, Boehner issue dueling responses to immigration rulling
What's more, she said smuggling prices have jumped from $1,000 to at least $1,600, and sometimes gangs demand more money before making the final delivery.
So far, the numbers of illegals crossing into the United States have been about half of last year's numbers. Haynes said that while about 68,000 unaccompanied children crossed the border last year, current numbers suggest a total of about 30,000 this year.
But at 30,000, it is still very high and equal to fiscal 2013's numbers.
She said that Mexico, Guatemala, El Salvador and Honduras have cracked down on families and children trying to leave. And, she added, that some still try is a sign that the political and humanitarian situation in those countries has not improved.

"To know that families are risking that level of life means that there is something bigger going on down there," said Haynes.
Source>http://www.washingtonexaminer.com/deaths-gang-activity-surge-as-illegals-flood-border-30000-expected/article/2565085
Posted by theodore miraldi at 3:58 PM