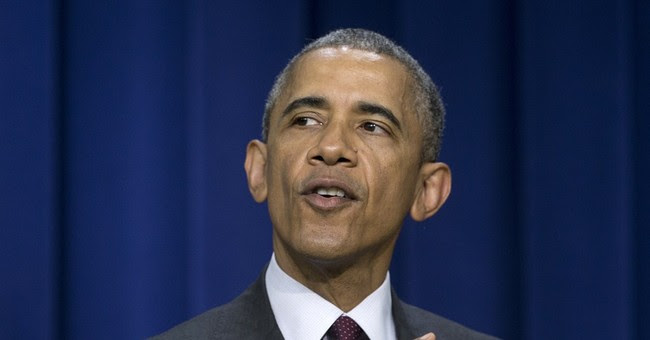 
What happens when the public does not wish to live out the utopian dreams of its elite leaders? Usually, the answer for those leaders is to seek more coercion and less liberty to force people to think progressively.
Here at home, President Barack Obama came into power in 2009 with a Democratic Congress, a sympathetic press, and allies in Hollywood, academia, unions, and philanthropic and activist foundations.
Yet all that support was not sufficient to ensure "correct" public attitudes about Obama's agenda on health care, entitlements, taxes, guns, abortion and cultural issues.
In the 2010 midterm elections, the Democrats forfeited their majority in the House. In the 2014 midterms, they lost their Senate majority and also lost ground in state legislatures and with governorships across the country. Since early 2013, President Obama's approval rating has been consistently below 50 percent.
How, then, do politically correct planners force the people to think and act properly when they push back?
Extra-legal executive orders can help a president bypass supposed troglodytes in Congress and among the public.
Obama granted blanket amnesties, proposed rules that would lead to the closure of many coal plants, and arbitrarily chose which health or labor statutes should be enforced and at what times. A filmmaker was even jailed on a trumped-up probation charge after making a video about Islam that was deemed unhelpful to the official administration Benghazi narrative. The IRS hounded nonprofit groups considered insufficiently progressive.
In a recent rant about conservative Fox News -- which has a fraction of the combined audience of the liberal mainstream networks ABC, CBS and NBC -- Obama warned that the media are going to have change the very way they report news. Presumably, Obama believes that Fox tricks the unknowing masses into thinking wrong thoughts, especially about the relationship between the poor and government assistance.
As Obama put it: "We're going to have to change how our body politic thinks, which means we're going to have to change how the media reports on these issues, and how people's impressions of what it's like to struggle in this economy looks like."
Given the First Amendment, how can the president "change" the media? Should the Federal Communications Commission pick and choose acceptable news outlets in the same manner that Lois Lerner ran her exempt-organizations division at the IRS?
Who would judge whether the media had changed to meet Obama's notion of correctness?
Hillary Clinton is worried that too many people have incorrect thoughts about feminist issues. For those who oppose abortion, Clinton believes that these supposedly wrong thoughts must be policed. "Deep-seated cultural codes, religious beliefs and structural biases," she warned, "have to be changed."
How, in a free society, does Clinton plan to alter the way religion and culture work? What sort of power would she need to rid us of these "deep-seated" but unhelpful "codes and beliefs"?
Recently, Clinton declared that if elected president, she would pick Supreme Court nominees by the litmus test of demanding that they oppose the Citizens United ruling. Clinton is apparently still furious at the high court's 2010 decision, which dismantled federal election rules restricting independent political expenditures by nonprofit organizations.
Citizens United, remember, was a conservative nonprofit group that produced an unflattering movie about Hillary Clinton. The Federal Election Commission went to court to prevent the film from airing on TV before the 2008 Democratic primaries.
In other words, Clinton wishes to judge the qualifications of future Supreme Court nominees on the basis of whether they agree that a nonprofit organization had no right to be critical of her in a documentary at election time.
If Clinton is really worried about the role of big money in politics, she would have done better to have insisted that the Clinton Foundation did not solicit donations from foreign governments while she was the secretary of state. She might have ensured that her family's foundation distributed 90 percent of its expenditures -- instead of a reported 10 percent -- directly to the charities it claimed to help, especially given that it has raised close to $2 billion.
Clinton might also have blasted former presidents seeking hefty lecture fees and family foundation donations from wealthy entrepreneurs who hope to buy access and influence from either a sitting secretary of state, a former president of the United States -- or a future president.
Or, Clinton herself might have cut back on lucrative speaking fees, often paid by wealthy corporations seeking influence. Bill and Hillary Clinton have pulled in $30 million in lecture cash in just the last 16 months. Mysteriously, the closer Hillary Clinton got to announcing her bid for the presidency, the more frequent and the more lucrative the Clinton duo's lecturing became.
When news organizations, judges or Americans in general do not think or speak in the correct fashion, then elite progressives believe they must do whatever is necessary to silence them -- while making themselves exempt from their own agendas.
Source>http://townhall.com/columnists/victordavishanson/2015/05/21/think-like-a-liberal--or-else-n2001619/page/full
Posted by theodore miraldi at 8:33 AM