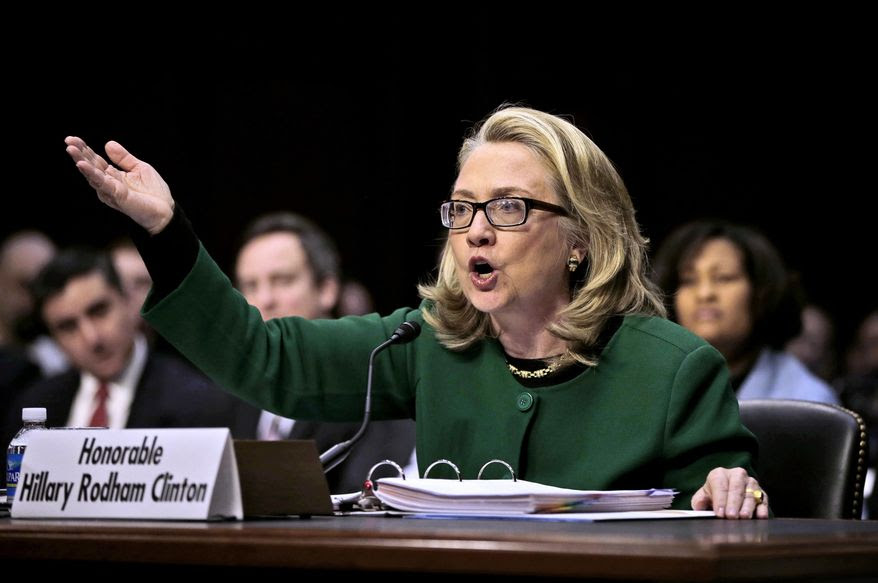 FILE - This Jan. 23, 2013, file photo shows Secretary of State Hillary Rodham as she testifies on Capitol Hill in Washington before the Senate Foreign Relations Committee hearing on the deadly attack on the U.S. diplomatic mission in Benghazi, Libya. The testimony of nine military officers severely undermines claims by Republican lawmakers that a “stand-down order” held back military assets who could have saved the U.S. ambassador and three other Americans killed in the attack. (AP Photo/Pablo Martinez Monsivais, File)

, but she remains the undisputed frontrunner to secure the 2016 Democratic presidential nomination and also leads a handful of would-be Republican rivals.
Thirty-nine percent say she is honest and trustworthy, according to a Quinnipiac poll released Thursday.
But by a 60 percent to 37 percent margin, American voters do say she has strong

leadership qualities. They’re divided, 48 percent percent to 47 percent, on whether she cares about their needs and problems.
Mrs. Clinton leads the contest for the Democratic presidential nomination with 57 percent of the vote, followed by Sen. Bernie Sanders of Vermont at 15 percent and Vice President Joseph R. Biden Jr. at 9 percent.
She also leads would-be Republican rivals in every head-to-head match-up, with Sens. Rand Paul of Kentucky and Marco Rubio of Florida coming the closest. She leads Mr. Paul by 4 points, 46 percent to 42 percent, and she leads Mr. Rubio by 4 points, 45 percent to 41 percent.
Against other Republicans, she leads:
- 47 - 40 percent over former Arkansas Gov. Mike Huckabee

.
“Can you get low marks on honesty and still be a strong leader? Sure you can,” said Tim Malloy, assistant director of the Quinnipiac University