What We Owe Our Troops 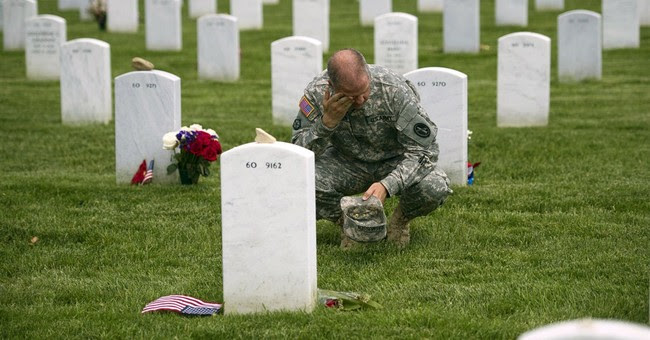 At some point on this Memorial Day weekend, stop a minute to remember all those Americans who have fallen in all the wars this nation has waged. And then, next, let’s contemplate what we ought do, if there is any action we might take, in memory of those who didn’t come home alive.

There are indeed numerous charities caring for veterans and their families, which are worthy of support, should you have the time or money to contribute.
But as citizens, we still owe something more to those who have given, as President Lincoln spoke at Gettysburg, “their last full measure of devotion.” More even, than our appreciative applause for the troops on airplanes and at professional sporting events . . . with their high-priced, taxpayer-paid military promotions.
First, the wounded among the more than 67,000 American soldiers killed and wounded in Iraq and Afghanistan are fully entitled to the medical care they were promised. So are Vietnam vets and Korean War vets, etc. This is simply upholding contract law.
What a scandal that these suffering vets have been systematically shortchanged by the Veterans Administration — too often effectively denied medical care. And a further one that official Washington gets away with meandering along merely changing suits at the VA and claiming it’s fixed, without making real progress to uphold what is a legal and a moral and sometimes a life-and-death responsibility to these soldiers.
Just last week, Speaker of the House John Boehner (R-Ohio) complained about continued substandard care with the quip: “If only the VA did half as good a job taking care of our veterans as they do their own bureaucrats.”
Second, let’s ask every man and woman seeking to be the president, and, therefore, the commander-in-chief of the armed forces, more than a few what-if and if-you-knew-then questions on foreign policy and the use of military force. We might want to compare the answers before we “pick” the next president.
As you know, former Florida Governor Jeb Bush had some surprising trouble recently with the hypothetical: If you knew then what we know now, would you have launched a U.S. invasion of Iraq?
After a few days, and a few answers, the presidential aspirant settled on: “No.”
While some attacked the hypothetical nature of the inquiry, on Meet the Press Sen. Rand Paul (R-Ky.) defended it: “Well, I think it’s an important question and I don’t think it’s a historical anecdote. I don’t think it’s something that’s a hypothetical question. I think it’s a recurring question in the Middle East. Is it a good idea to topple secular dictators? And what happens when we do? I think, when Hussein was toppled, we got chaos. We still have chaos in Iraq.”
Sen. Paul then pivoted to a more recent military intervention, one both conceived and conducted by the Obama Administration, when Hillary Clinton was Secretary of State: “But I think the same question, to be fair, ought to be asked of Hillary Clinton, if she ever takes questions. They should ask her, ’Was it a good idea to invade Libya? Did that make us less safe? Did it make it more chaotic? Did it allow radical Islam and ISIS to grow stronger?’”
The NATO air war — dubbed “leading from behind” by the O Administration, itself — succeeded in toppling the Gaddafi regime. But that successful regime-change then also led to continued chaos in Libya.
“[B]y all objective measures, it is a disaster. I call it a jihadist wonderland,” Rand Paul told a recent audience. “Our ambassador was assassinated, a third of the country pledges allegiance to ISIS, I would call it a failed state.”
Yes, now and throughout the 2016 presidential campaign, let’s talk about what happened in Libya and Iraq and Afghanistan, openly, honestly, critically . . . and at length. That’s what is best for our troops, now and in the future.
The third thing we owe those who have fought and died is to answer another question, a very non-hypothetical question: Are we today at war against the Islamic State?
We really should know . . . I mean, on Memorial Day and all.
We know our planes are bombing in Syria and Iraq, that US commando missions into both countries have occurred, that when politician after politician says “no boots on the ground,” they’re all lying (we have 3,000 troops on the ground as “advisors”), and that we’re still spending money hand-over-fist.
So we’re conducting what amounts to a war. But is it lawful?
President Barack Obama claims he has the constitutional power to engage militarily in Iraq and Syria against the Islamic State under the Authorization for Use of Military Force (AUMF) passed by Congress in 2001.
But that War on Terror authorization was for “all necessary and appropriate force against those nations, organizations, or persons he determines planned, authorized, committed, or aided the terrorist attacks that occurred on September 11, 2001, or harbored such organizations or persons. . . . ”
A number of legal scholars point out that doesn’t apply to the new Islamic State.
Which may be why, back in February, Obama asked Congress to pass a new AUMF to cover military action against the Islamic State. Congressional Republicans balked, though, complaining the president’s proposed AUMF isn’t strong enough.
Of course, nothing prevents congressional Republicans from passing a stronger version.
Or better yet, pass no such AUMF. Instead, demand that President Obama keep American boys and girls out of harm’s way in Iraq and Syria.
The Islamic State may wish to be at war with the U.S., but we don’t have to humor them. Let Turkey, Saudi Arabia, Iraq and Iran defend themselves and their territory from this gang of cutthroats.
In 1964, before President Lyndon Johnson foolishly escalated U. S. involvement in Vietnam, when he was also engaged in seeking his first popular election to the presidency, he spoke common sense about American military intervention abroad: “We are not about to send American boys nine or ten thousand miles away from home to do what Asian boys ought to be doing for themselves.”
Same goes for “Arab boys.”
This is their battle, not ours.


We owe it to our fallen, our current soldiers, our vets — not to mention our children — to know the difference.
Source>http://townhall.com/columnists/pauljacob/2015/05/24/what-we-owe-our-troops-n2003179/page/full
Posted by theodore miraldi at 9:14 AM