5 Mistakes That Will Lead To The Fall of America 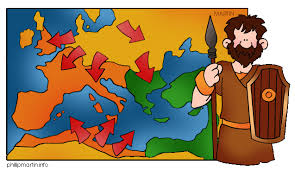 Thousands of years after the Roman Empire fell, people are still speculating about how such a powerful empire became too feeble to defend itself. Did it become corrupt? Was its taxes too high? Was it widespread lead poisoning? The refusal to break up tribes it assimilated? Was it the loss of traditional values? Did it over-expand?

There are all sorts of theories, but nobody really knows.
However, if American falls, historians won’t have to speculate because the problems that are destroying our country are right there for anyone to see. You want to know how to break the greatest nation the world has ever seen over the course of a few short decades? Just look at what we’re actually doing because future generations will point to it when they’re trying to figure out where we went wrong.
1) Unsustainable Debt: By 2020, projections indicate that we’d need 20% of the GDP of the ENTIRE PLANET just to finance our debt, which will continue to increase at a rapid pace. Despite the fact that it would require a miracle bigger than what Joan of Arc accomplished in order for Social Security and Medicare to function for another 20 years without enormous tax increases, we just added another costly entitlement program (Obamacare) and politicians are incessantly clamoring for new spending. Simply put, that is unsustainable over the long haul and without almost revolutionary changes that are currently politically unimaginable, our country will either go bankrupt or our money will be inflated so much that we’ll need wheelbarrows full of greenbacks to buy a loaf of bread.
2) Enormous Centralized Government: The bigger the tick, the less blood there is for the dog and there is no larger collection of blood suckers on Planet Earth than our own federal government. Our government has become so massive that lawmakers don’t even read the bills they pass any more, trivial changes to regulations made by unelected bureaucrats can drive productive businesses into bankruptcy and perhaps worst of all, 49% of the public gets benefits. That has not only bled the private sector and made our economy less dynamic, it has led to massive corruption. As P.J. O’Rourke said, “When buying and selling are controlled by legislation, the first things to be bought and sold are legislators.”
3) An Overly-Progressive Income Tax Code: There are a lot of ramifications to almost half of all Americans paying no income taxes and few of them are good. There are few brakes on high income taxes because half the country isn’t impacted at all. Moreover, the progressive nature of the tax code stifles movement between economic classes. It’s a lot harder to go from “rags to riches” when the government starts looting you like a Somali pirate the moment you make any real income. Additionally, if half of Americans aren’t paying “their fair share,” then the other half has to overpay to make up for it. That reduces investment and production from the people in the best position to create jobs, thus slowing economic output even further. What happens when the tax code gets so skewed that the “takers” outnumber the “makers” in the United States? We’re getting very close to that tipping point and it’s doubtful that we’ll like the answer when we find out.
4) Moral Decay: It’s highly ironic that Americans have pushed Christianity to the side and embraced an, “If it feels good, not only is it okay to do it, but other people should celebrate you for it,” mentality at the very moment America is being decimated by a profound moral crisis. It’s no coincidence that America has the largest prison population in the world, drug use is rampant, 41% of births are out-of-wedlock and mass murders have become all too common in a Christian nation that has turned its back on God. As our nation becomes increasingly decadent, we’re learning what John Adams meant when he said, “Our Constitution was made only for a moral and religious people. It is wholly inadequate to the government of any other.”
5) Backward Immigration Policies: When America is still considered the most desirable place to live on the planet, immigration should be a huge boon to the country. At times in our nation’s past it certainly was, but today this potential source of strength is a wash at best and a drag on the country at worst.
For example, did you know that, “in 2010, 36 percent of immigrant-headed households receive benefits from at least one welfare program, compared to just 23 percent of households headed by U.S. natives. Among households with children, immigrant welfare households outnumbered non-immigrants by a similarly wide margin: 57 percent to 40 percent.”
The percentage of immigrants on welfare should be zero. After all, why would we want to bring someone into our country who’s going to end up on the dole?
Instead of selecting the cream of the crop, the rich, the geniuses, the skilled, and people who can add to our tax base, we take pretty much anybody who has a relative here or who claims that he’d be in danger in his home country (and let’s face it, the vast majority of them are lying). Do we get SOME great Americans this way? Sure, but why not spend all our time searching out those people instead of getting a few of them, lots of welfare cases and a handful of Dzhokhar Tsarnaevs in the process?
This is even truer for illegal immigrants who are overwhelmingly poor, uneducated, minimally skilled and by definition, are not law-abiding people. In a world where an education and a high level of skill are becoming ever more necessary to get most jobs worth having, why import massive numbers of people who will never fit that definition to undercut poor American workers who are already struggling to climb the ladder?
On top of all this, instead of encouraging immigrants to adapt to this most successful culture in recorded human history, they’re encouraged to nurse grievances, despise their own adopted home country and cling to the cultures of the failed nations from which they’ve come. Instead of a source of strength, immigration is handled so poorly that we’d be better off stopping it entirely until our laws can be rewritten from top to bottom rather than continuing on with a system that’s completely broken.
Sources>http://townhall.com/columnists/johnhawkins/2015/06/27/5-mistakes-that-will-lead-to-the-fall-of-america-n2018241/page/full
Posted by theodore miraldi at 10:53 AM