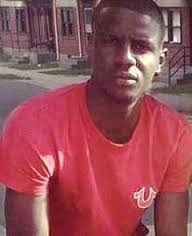 Freddie Gray suffered a single “high-energy injury” — such as those seen in shallow-water diving incidents — most likely caused when the police van in which he was riding suddenly decelerated, according to a copy of the autopsy report obtained by the Baltimore Sun.
The state medical examiner’s office concluded that Gray’s death fit the medical and legal definition of an accident but ruled it to be a homicide because officers failed to follow safety procedures “through acts of omission.”
Although Gray was loaded into the van on his belly, the medical examiner surmised that he may have gotten to his feet and was thrown into the wall during an abrupt change in direction. He was not belted in, but his wrists and ankles were shackled, making him “at risk for an unsupported fall during acceleration or deceleration of the van.”
ADVERTISING
Gray, 25, was arrested April 12 after a foot pursuit by officers in the Gilmor Homes area and suffered a severe spinal injury while in police custody. His death a week later sparked protests over police brutality and unrest in the city — including looting and rioting — that drew international attention to the case.
The Baltimore state’s attorney’s office charged the six officers involved in Gray’s arrest and death. Officer Caesar R. Goodson Jr., the driver of the van, is charged with second-degree depraved-heart murder, while three other officers are charged with manslaughter. The remaining officers face lesser charges.
All of the officers have pleaded not guilty, and a trial has been set for October.
The autopsy report was completed April 30, the day before State’s Attorney Marilyn Mosby announced criminal charges against the officers. The autopsy has not been made public, and the deadline for releasing evidence in the case to defense lawyers is Friday. A copy of the autopsy was obtained and verified by sources who spoke on the condition of anonymity because of the high-profile nature of the case.
Mosby’s office and the state medical examiner declined to comment.
Gray tested positive for opiates and cannabinoid when he was admitted to Maryland Shock Trauma Center, according to the autopsy. The report makes no further reference to the drugs found in his system.
The report also does not note any previous injuries to Gray’s spine.
The autopsy details a chronology of the events surrounding Gray’s arrest that helped inform the medical examiner’s conclusion. The medical examiner relied upon witness statements, videos and an examination of the transport van.
While bystanders captured his arrest on video, showing Gray moaning for help, the autopsy concluded that Gray suffered no injuries to suggest a neck hold or stemming from physical restraint.
Assistant medical examiner Carol H. Allan noted that Gray could be seen bearing weight on his legs and speaking as he was loaded into the van.
Officers placed Gray on a metal bench running from front to back along the outside wall of the van. After the doors were closed, he could be heard yelling and banging, “causing the van to rock,” the autopsy noted.
The van made several stops. The second stop occurred a few blocks away on Baker Street, where officers placed an identification band and leg restraints on Gray.
“Reportedly, Mr. Gray was still yelling and shaking the van,” the medical examiner wrote. “He was removed from the van and placed on the ground in a kneeling position, facing the van doors, while ankle cuffs were placed, and then slid onto the floor of the van, belly down and head first, reportedly still verbally and physically active.”
Authorities previously said the third stop in the area of Fremont and Mosher streets was captured on video, which showed the van driver, Goodson, getting out and looking in the back.
During a fourth stop, at Dolphin Street and Druid Hill Avenue, authorities said Goodson called for assistance, at which point Sgt. Alicia White, one of the officers who has been charged with manslaughter, got involved.
“The assisting officer opened the doors and observed Mr. Gray lying belly down on the floor with his head facing the cabin compartment, and reportedly he was asking for help, saying he couldn’t breathe, couldn’t get up, and needed a medic,” the autopsy says. “The officer assisted Mr. Gray to the bench and the van continued on its way.”
When the van made a fifth stop at North and Pennsylvania avenues to pick up a second arrestee, “Mr. Gray was found kneeling on the floor, facing the front of the van and slumped over to his right against the bench, and reportedly appeared lethargic with minimal responses to direct questions,” the report says.
The medical examiner concluded that Gray’s most significant injury was to the lower left part of his head. Given the descriptions of his demeanor and positioning in the van, it most probably occurred after the second and before the fourth stops made by the van driver, and possibly before the third stop, according to the autopsy.
While it’s possible Gray was hurt while lying on the floor and moving back and forth, Allan determined that his body probably couldn’t have moved in that position with enough force to cause his injuries.
Allan surmised that Gray could have gotten to his feet using the bench and opposite wall. With his hands and ankles restrained, and unable to see out of the van and anticipate turns, she said he was at a high risk for an unsupported fall.
She also noted the possibility that Gray’s neck injury occurred “with him in a partially reclining position or as he was changing his position on the floor of the van,” if the van moved abruptly enough.
The injury to Gray’s spinal cord would have caused loss of function of his limbs and would have “direct effects” on his ability to breathe, according to the autopsy.


Police had said in a court filing that the second passenger reported hearing Gray banging and kicking through the metal divider before the fifth stop. Allan said that would not have been possible given Gray’s injuries, but he may have been suffering a seizure at the time, which could have caused the noise, she said.
Source>http://www.washingtonpost.com/local/crime/autopsy-shows-freddie-gray-suffered-single-high-energy-injury/2015/06/23/5fdbca30-19ec-11e5-ab92-c75ae6ab94b5_story.html?hpid=z4
Posted by theodore miraldi at 11:22 AM