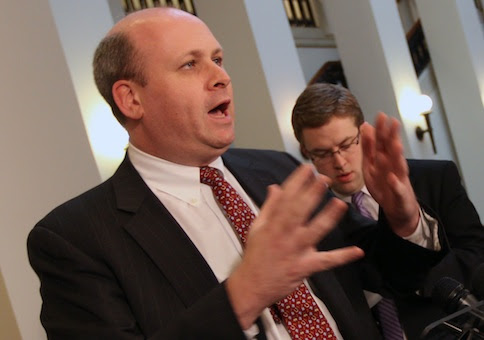 Hillary Clinton’s top campaign lawyer is behind a multi-state push challenging voter identification laws implemented in recent years, efforts that are expected to reach numerous other states ahead of the 2016 elections.
Marc Elias, a top campaign lawyer for Hillary Clinton and a partner at the Washington, D.C., law firm Perkins Coie, has filed lawsuits in three states thus far. The nationwide campaign is being fueled with money from the liberal billionaire George Soros.
Elias first began exploring the possible challenges back in January 2014. Soros then became involved, vowing to throw his weight behind the effort in collaboration with Elias.
“We hope to see these unfair laws, which often disproportionately affect the most vulnerable in our society, repealed,” Soros told the New York Times.
“It is disingenuous to suggest that these laws are meant to protect against voter fraud, which is nearly nonexistent,” Soros political adviser Michael Vachon added. “Clearly they are meant to give Republicans a political advantage on Election Day.”
Soros has pledged $5 million to propel the campaign. Elias did not return a request for comment concerning his dealings with Soros or the total number of lawsuits they plan on bringing forward. A request for comment from George Soros’s press office was also not returned by press time.
Democrats ramped up their efforts last month to challenge voter ID laws implemented by Republican legislatures and governors, claiming that the laws disenfranchise minority voters.
The first in the series of lawsuits was filed in Ohio on May 8. Three weeks later, on June 1, a second suit was filed in Wisconsin. On June 11, a third lawsuit was filed in Virginia. Further suits are expected to follow in other states.
Elias is working independently on behalf of his firm, Perkins Coie, though the Clinton camp supportsthe effort. Perkins Coie has pulled in more than $40 million from Democratic clients since 2000.
The suits came as Hillary Clinton made comments about voting in a number of public speeches.
During a speech in Houston on June 4 at historically black Texas Southern University, Hillary Clintoncalled for a universal, automatic voter registration for 18-year-olds along with early voting up to 20 days before an election.
“I call on Republicans at all levels of government with all manner of ambition to stop fear-mongering about a phantom epidemic of election fraud and start explaining why they’re so scared of letting citizens have their say,” Clinton said during the speech.
True the Vote, a right-leaning vote-monitoring organization, sees the campaign as a political stunt to rile up apathetic voters who may not have the same excitement for Clinton as they did for Obama.
“Mrs. Clinton’s decision to shuffle voting reforms to the top of her policy platform has now been viewed as a purely political move to rally the potentially apathetic Obama coalition prior to 2016,” True the Vote said in a statement.
“The political calculus is simple: the potential benefits of victory outweigh the lasting efficacy of debates over real election reform. It is a very rare thing to see election experts on both the left andright agree that Clinton-sanctioned demagoguery and litigation are not based in objective facts and promising any success in the courts.”
While Soros and other Voter ID opponents say the laws disenfranchise minority voters, one state showed the opposite outcome: minority turnout in Georgia skyrocketed after the law went into effect.
According to a review conducted by the Atlanta Journal-Constitution, turnout among African Americans and Hispanics drastically increased from 2006 to 2010.
“Georgia first adopted a voter ID law in 2005 and won court approval to implement it in 2007. The law has now been in place for two major statewide general elections: 2008, when the presidential race was on the ballot, and 2010, when voters selected a new governor,” AJC writes. “Prior to the new law, voters had been able to present one of 17 forms of identification, including a utility bill.”
“Elections data reviewed by the AJC show that participation among black voters rose by 44 percent from 2006—before the law was implemented—to 2010. For Hispanics, the increase for the same period was 67 percent. Turnout among whites rose 12 percent.”
Source>http://freebeacon.com/politics/clinton-lawyer-soros-back-anti-voter-id-lawsuits/
Posted by theodore miraldi at 6:35 AM