Farrakhan calls for American flag to come down 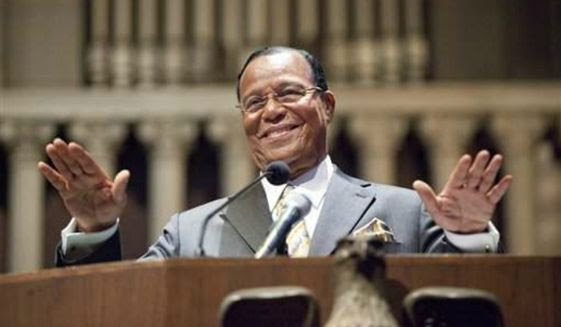 Louis Farrakhan, leader of the Nation of Islam. (Associated Press)


Nation of Islam leader Louis Farrakhan said Wednesday that the American flag should be taken down instead of the Confederate flag.
The activist made his comments at Metropolitan AME Church in Washington, D.C., just one week after nine black individuals were killed at Emanuel African Methodist Episcopal Church in South Carolina. Dylann Roof, 21, was arrested less than 24 hours after the massacre in connection with the massacre.
“I don’t know what the hell the fight is about over the Confederate flag! We need to put the American flag down because we’ve caught as much hell under that as the Confederate flag!” the Nation of Islam leader said, a local radio station, WMAL, reported. “Who are we fighting today? It’s the people that carry the American flag. What flag do the police have? What flag flies over the non-Justice Department? What flag flies over the White House?”
Mr. Farrakhan said white people only marched with black citizens last weekend in South Carolina because they didn’t want social unrest to occur, WMAL reported.
Rush Limbaugh predicted on Tuesday that liberal activists would call for the American flag to be taken down, The Blaze reported. Greg Gutfeld of Fox News’ “The Five” called the radio host’s comments a “fear tactic.”
“This is absurd. … ‘They’re gonna take our flags’ is like a leftist saying, ‘They’re gonna take my birth control pills.’ It’s a fear tactic,” Mr. Gutfeld said, Mediaite reported Wednesday.
Sources>http://www.washingtontimes.com/news/2015/jun/25/louis-farrakhan-calls-american-flag-come-down-who-/#ixzz3e6VPuOsc
Posted by theodore miraldi at 3:31 PM