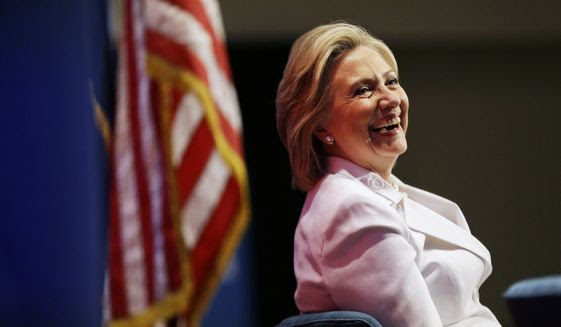 
Hillary Clinton said Thursday that “negative” comments, such as those made about Mexicans by “a recent entry into the Republican presidential campaign,” can potentially trigger an unstable person into committing violence against innocent people.
The Democratic presidential candidate did not mention Donald Trump by name but explicitly mentioned remarks he made during his announcement speech on Tuesday, the day before 21-year-old Dylann Roof allegedly killed nine congregants in a historic black church in downtown Charleston, South Carolina.
“We have to have a candid national conversation about race, and about discrimination, hatred, prejudice,” Mrs. Clinton said of the church shootings in an interview on “Ralston Live,” ABC Newsreported.
“Public discourse is sometimes hotter and more negative than it should be, which can, in my opinion, trigger someone who is less than stable,” she said.
“I think we have to speak out against it,” Mrs. Clinton continued. “Like, for example, a recent entry into the Republican presidential campaign said some very inflammatory things about Mexicans. Everybody should stand up and say that’s not acceptable.”
During his announcement speech Tuesday, Mr. Trump said, “When Mexico sends its people, they’re not sending their best. They’re not sending you. They’re not sending you. They’re sending people that have lots of problems, and they’re bringing those problems with us. They’re bringing drugs. They’re bringing crime. They’re rapists. And some, I assume, are good people.”
Mrs. Clinton said Thursday that such rhetoric needs to stop.
“I think he is emblematic,” she said of Mr. Trump, ABC News reported. “So I want people to understand, it’s not just him, it’s everybody.”
“The second thing is guns. Let’s just cut to the chase – it’s guns,” Mrs. Clinton said, adding that she supports background checks for private gun purchases.
Mr. Trump posted a video response Friday morning on his Instagram account, titled “Hillary Clinton reaches new low.”
“Wow, it’s pretty pathetic that Hillary Clinton just blamed me for the horrendous attack that took place in South Carolina. This is why politicians are just no good. Our country’s in trouble,” he said in the brief clip.
Source>http://www.washingtontimes.com/news/2015/jun/19/hillary-clinton-suggests-donald-trump-like-rhetori/#ixzz3dbC62jCT
Posted by theodore miraldi at 7:00 AM