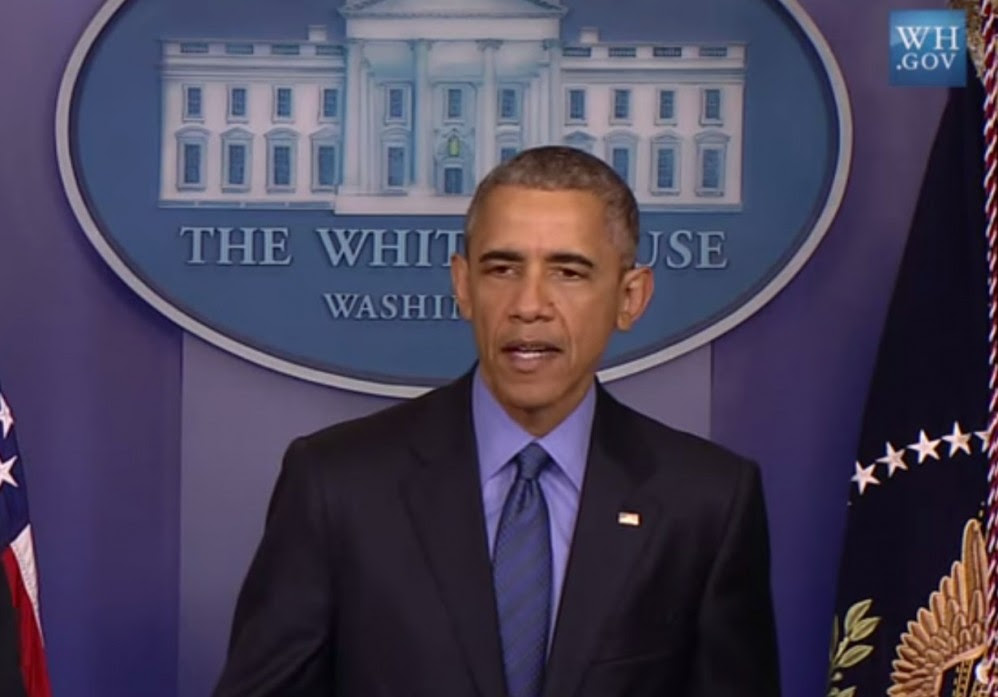 By David Harsanyi
President Barack Obama responded to the horrific shooting at a historic black church in Charleston that left nine dead with an earnest statement—well, other than that contention that was completely untrue.

Once again, innocent people were killed in part because someone who wanted to inflict harm had no trouble getting their hands on a gun. … We as a country will have to reckon with the fact that this type of mass violence does not happen in other advanced countries.

Let’s set aside the assertion that it’s too easy to obtain guns in America and deal with the implication that we are somehow uniquely violent or that “mass violence does not happen in other advanced countries.” The president has made this claim in various ways and with various qualifiers.*
Parlez vous Hebdo? Because surely the president recalls that in January of this year two gunmen entered the office of a satirical magazine in France with an assortment of guns and murdered 11 people (and injured 11 more). After leaving, they killed a police officer. And in a marketplace catering to Jews another five were murdered and 11 wounded. France is, allegedly, an advanced country, is it not? Perhaps if Obama had attended the anti-terror rally in Paris like every other leader of advanced countries did, his recollection would be sharper.
It only takes some quick research to discover that rampage killers, acts of terror (as the Charleston shooting most certainly is), school attacks, spree killers are not unique to the United States.
In 2011, a deranged Anders Behring Breivik killed eight people by setting off a van bomb in Oslo, before going on to murder 69 more people, mostly children, at a summer camp. This is the single worst shooting spree incident in history.  Obama surely remembers that he left the White House and visited the Norwegian ambassador’s residence to offer his condolences.
It takes only a rudimentary search to find out that mentally unstable killers can be found anywhere. In February of this year, nine people were killed in Czech Republic spree killing. In Erfurt, Germany, a couple of years ago, an expelled student murdered 13 teachers, 2 students and a policeman. That same year, in the Serbian village of Velika Ivanča, a gunman shot and killed 14 people—many of them his own relatives— and a Russia gunman opened fire with a semi-automatic rifle killing six people. A couple of years before that, in England, a lone gunman killed 12 people and injured 11.
Advanced countries or developing ones, it’s the same thing. In 2013 a mentally unstable man in Rio de Janeiro killed 12 children and seriously wounded another 12.  And you might remember that China had an outbreak of mass stabbings, hammer and cleaver attacks not long ago. You don’t need guns to kill people. One man stabbed 22 children by himself.  Two attackers killed 29 people and injured 143 at Chinese railway station last year.
It should be noted that not that long ago advanced nations in Europe were busy throwing people into ovens or starving millions on purpose. The idea that violence is uniquely American is best left to fringe leftists on college campuses. Moreover, as The Associate Press reported in 2012, many experts contend that mass shootings are not growing in frequency at all. One has data that shows that mass shootings reached their peak in 1929 and have declined steadily since. Overall, gun violence has also been declining since 1993.
Now, even one shooting is a tragedy. What happened in Charleston is horrifying and heartbreaking, and there’s nothing wrong with having a debate about how to avoid shootings in the future. As for the frequency of these events, there can be a host of reasons why we might have more rampages. Maybe we’re freer and this puts us in more danger. Maybe we need better mental health policies. Maybe, as the president argues, we have access to too many guns. I don’t think so, but make that argument rather than trying to score political points with a falsehood.
*Update: Most of the pushback on social media claims that I’m being unfair to Obama. The president, they argue, is saying that we have a higher frequency of shootings, not that mass shooting are a predominately American event. (Even then, he might not be right.)
It’s clear Obama is stressing separate points, and without doubt the perception he’s trying to create is that this type of “mass” violence is something that almost never happens anywhere else. It’s nothing new for him. Here’s his tweet from the speech yesterday:
View image on Twitter 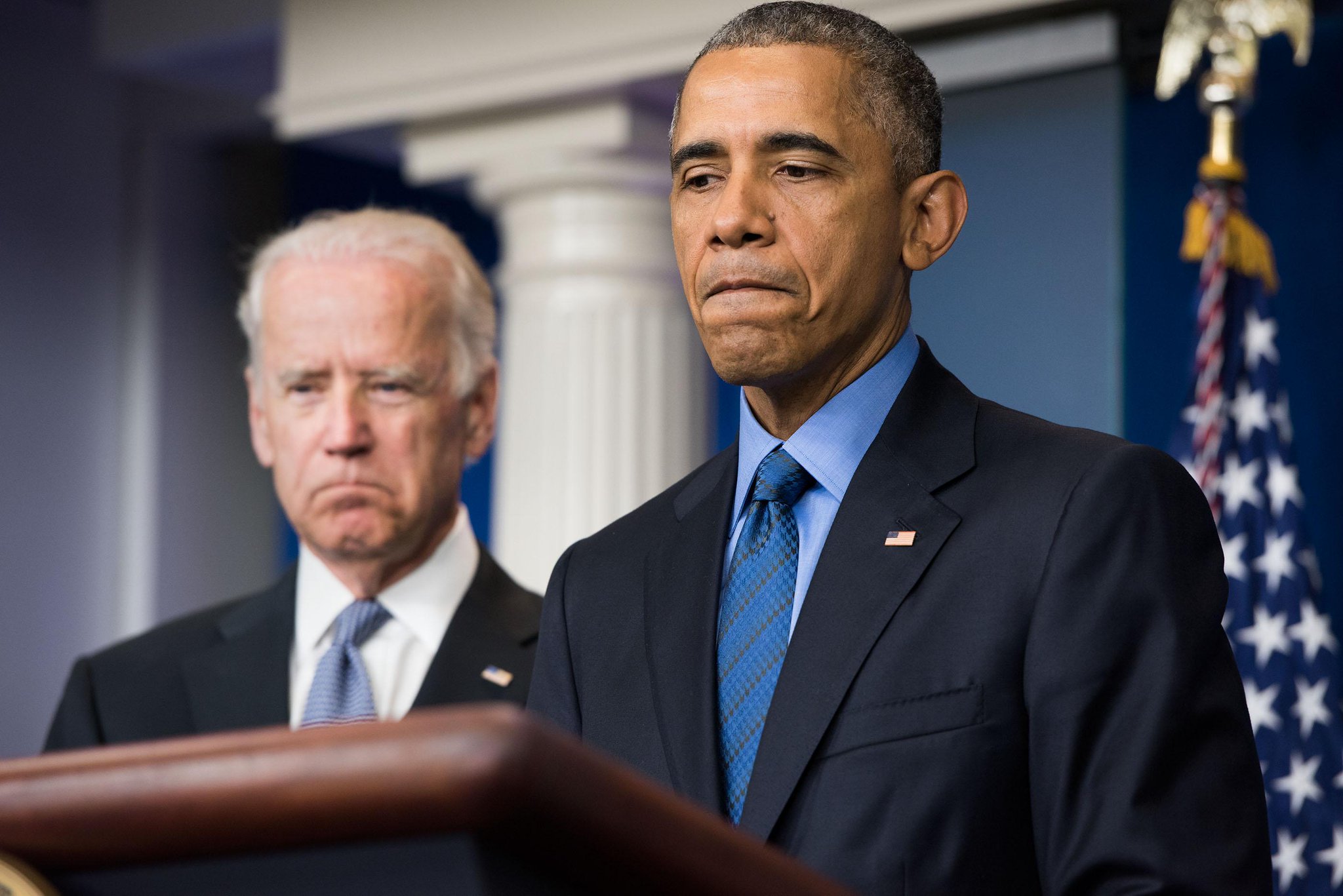 The White House  ✔@WhiteHouse
"This type of mass violence does not happen in other advanced countries." —@POTUS: http://go.wh.gov/nuQktp


At the very best, as Politifact might put it, his comments are half true. I’ve gone back and read Obama’s remarks over the years on gun issues and he’s always tossing around this idea. Sometimes he interchanges mass violence and all gun violence. Sometimes he compares us to the “developed world” and sometimes he compares us to the “advanced world”— it’s difficult to understand what countries he’s talking about. But he doesn’t always throw a qualifier in about frequency or anything else.

So if you don’t like the quote today, here is one from last year:

My biggest frustration has been that this society has not been willing to take some basic steps to keep guns out of the hands of people who can do just unbelievable damage. We are the only developed country on earth where this happens. And that it happens now once a week. And it’s a one day story.”

This “society” has a problem. We are the only developed country on earth where this happens. Untrue.
Source>http://thefederalist.com/2015/06/18/actually-president-obama-mass-killings-arent-uncommon-in-other-countries/
Posted by theodore miraldi at 1:16 PM