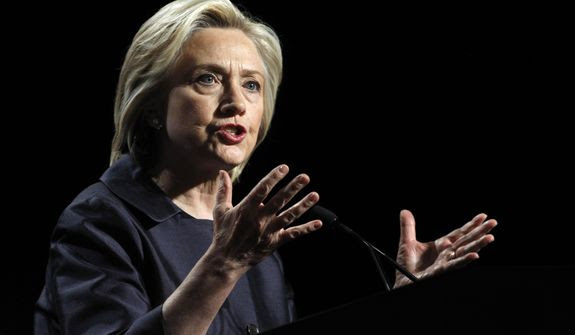 Congressional Republicans released nearly 200 pages of emails involving former Secretary of State Hillary Rodham Clinton, saying Monday they raised questions about whether the Obama administration and the Democratic presidential candidate herself were truthful when they said they turned over all of her email communications on Benghazi.
Rep. Trey Gowdy, chairman of the House Select Committee on Benghazi, which is looking into the 2012 terrorist attack in Libya, said the new emails were obtained directly from Sidney Blumenthal, a Clinton confidant, and demanded to know why they weren’t turned over first by the State Department. He ordered the department to search its files to see whether it has them but failed to turn them over, or whether Mrs. Clinton never released them in the first place, which would contradict her public statements.
“Once again the Benghazi Committee uncovers information that should already be part of the public record but was not made available to the American people or congressional investigators,” Mr. Gowdy, South Carolina Republican, said.
He also said the emails show Mrs. Clinton soliciting help and wisdom from Mr. Blumenthal, who had no official position in the State Department. The former secretary has said his emails were unsolicited.
The Benghazi probe interviewed Mr. Blumenthal last week, and Democrats have demanded that the transcript be released immediately, saying it would put the emails in context, proving they are being used as a political ploy by the GOP.
“By the chairman’s own admission, these emails have absolutely nothing to do with the attacks in Benghazi, and their selective release demonstrates the select committee’s singular focus on attacking Hillary Clinton and her bid for president,” said Rep. Elijah E. Cummings, the ranking Democrat on the probe panel.
State Department spokesman John Kirby said some of the emails released by the committee Monday had already been provided to Congress, but he couldn’t speak to the entire set.
“We’re still working our way through those emails,” he told reporters. He suggested that any emails that weren’t among the 300 released to the committee may have been outside of the scope of inquiry focused on Benghazi.
Mrs. Clinton has admitted she set up and used her own email server and account during her time at the State Department, which meant her communications weren’t able to be searched under open records or congressional information requests, as required by law.
Prodded by Mr. Gowdy’s committee last year, nearly two years after she left office, Mrs. Clinton turned over to the State Department about 30,000 messages she decided were related to official business. She said she withheld and expunged another 32,000 messages and says she has wiped the server clean to prevent anyone from recovering any of them.
The State Department is under a court order to produce all of the emails publicly, though it claimed to have already given Mr. Gowdy’s committee all emails related to the Benghazi investigation.
Mr. Gowdy said the latest releases, however, poke a hole in that version, saying that either Mrs. Clinton didn’t actually turn over all appropriate messages to her former employer or else the State Department didn’t comply with the committee’s demand for information.
“These emails should have been part of the public record when Secretary Clinton left office and, at a bare minimum, included when the State Department released Clinton’s self-selected records on Libya,” Mr. Gowdy said.
He also questioned the propriety of Mrs. Clinton relying on Mr. Blumenthal for external advice on Libya given that the State Department had its own intelligence-gathering tools that she should have been using.
Democrats said the continued focus on Mrs. Clinton’s emails is a political effort to tar her amid her presidential campaign.
“Before today, Chairman Gowdy had not officially released a single email from a single witness in this entire investigation, which has lasted more than a year. Now he has apparently decided that this one witness is so critical that his emails — and his alone — must be released,” Mr. Cummings said.
Source>http://www.washingtontimes.com/news/2015/jun/22/new-emails-reignite-hillary-clinton-email-scandal/#ixzz3dpxNYlNC
Posted by theodore miraldi at 7:35 PM