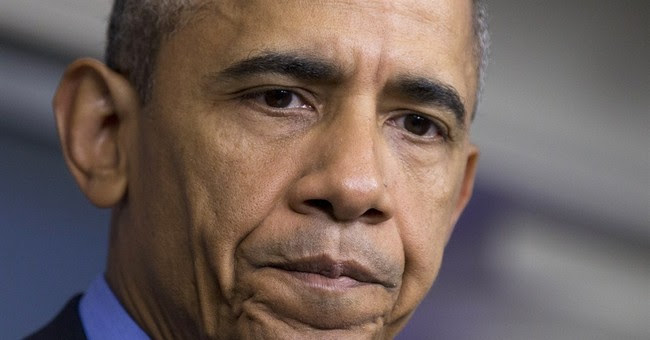 Of all the annoying things President Obama does, one of the worst is his hectoring Republicans and conservatives for their partisanship when he is the quintessential divisive partisan.

The Washington Post reports that the day after the shootings in Charleston, South Carolina, Obama began the day angry and frustrated and ended it admitting that he has been unable to change the culture of polarization and gridlock in Washington, which he is obviously blaming for the climate that led to the shootings.
Please imagine the level of arrogance it would take to assume one could, as president of the United States, even with the cooperation of other Washington politicians, create an atmosphere that would make such episodes of evil in the nation obsolete.
That Obama does make these assumptions is pretty clear from his immediate effort to scapegoat others for generating the type of angst he assumes led to this episode.
He said: "When I ran in 2008, I in fact did not say I would fix it. I said we could fix it. I didn't say, 'Yes, I can.' I said, 'Yes, we can.'" He continued, "If you're dissatisfied that every few months we have a mass shooting in this country killing innocent people, then I need you to mobilize and organize a constituency that says this is not normal and we are going to change it."
With that statement, he attempted to link up the partisanship with the killings and blame the former for the latter.
But let's accept this assumption, for the sake of argument, that a sitting president does have the power, in cooperation with other Beltway bigwigs, to bring about a wholesale change in people's attitudes and fundamental nature that could prevent mass shootings motivated by race or mass shootings in which a firearm of some kind is the primary weapon.
If Obama truly believed that, then why didn't he try to do it instead of being the most self-centered, divisive, partisan president in modern history and doing just the opposite? If he really values bipartisanship and collegiality so much, why didn't he ever attempt to compromise instead of running roughshod over anyone who even thought about dissenting?
Why did he tell Republicans to quit talking and to sit in the back of the car? Why did he remind Republicans that he is the president, implying that his will should control?
The reason is that regardless of what Obama says about valuing bipartisanship, he only does when people roll over to his dictates. As long as people are docile, he's happy and agreeable, but when they object to his destructive agenda, he becomes petty, bitter, strident, vindictive and despotic. For him, it's always been "my way or the highway."
When the people, through their elected representatives, rejected Obamacare, he ramrodded it through using corrupt and dictatorial tactics. When the voters repudiated his agenda in the 2010 congressional elections, he pretended to hear their message, but when he explained his perception of their message, we learned that he believed they had only rejected his agenda because he hadn't done a sufficient job of explaining it. It couldn't possibly have been that the bitter-clinging rubes were capable of gathering their own information and making informed decisions and had rejected his terrible policies.
When the people rejected his agenda again in 2014, he didn't listen and promise to make adjustments. He doubled down in his determination to circumvent their will further through highhanded executive orders and administrative regulations.
In case you think I'm unfairly charging Obama with scapegoating, please consider his other statements on the Charleston tragedy. He cited a letter he had received from a Colorado man who voted for him twice but expressed disillusionment over the continuing gridlock. Obama said he told him: "You're right. I am frustrated. You have every right to be frustrated because Congress doesn't work the way it should. Issues are left unattended. Folks are more interested in scoring political points than getting things done." He added that incentives are built into our political system to encourage polarized politics. "As mightily as I have struggled against that, I told him: 'You're right. It still is broken.'"
Obama hasn't struggled against polarization; he has elevated it to a new level and reveled in it.
He conveniently claims that by using the pronoun "we" in "yes, we can," he meant that all of us could change things together, but anyone who has witnessed his narcissism knows that he was trying to create the distinct impression that he -- single-handedly, chin up in the air and Roman columns in the background -- could usher in utopian changes. If he meant "we" in any sense at all, he meant that people could join hands and worship him together.
It's sad that Obama and some other leftists believe they can fundamentally alter the human condition through politics as a primary change agent, but it's even worse that Obama engages in the opposite type of behavior that would be necessary to make such changes if in fact they were possible.
He simply will not quit playing the race card and exploiting every tragedy for partisan advantage. When tragedies occur, he offers not reassuring words but words of division and blame, almost always grounded in partisanship and, when relevant, race.
It would be wonderful if just once, he could rise above his own partisanship and bitter feelings and at least try to offer words of consolation instead of invective and recrimination.
Source>http://townhall.com/columnists/davidlimbaugh/2015/06/23/obama-is-bipartisan-like-im-a-democrat-n2015804/page/full
Posted by theodore miraldi at 9:08 AM