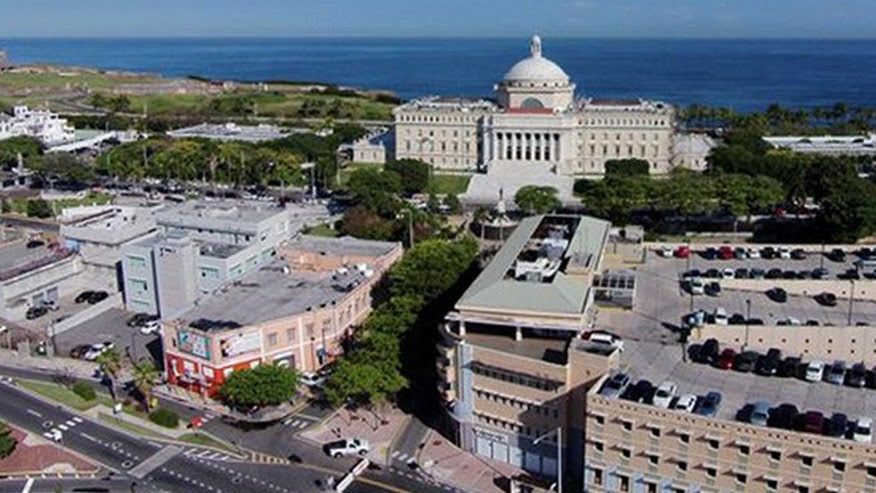 The Puerto Rican capitol in San Juan is seen in this AP photo (AP)
Puerto Rico's governor believes the U.S. territory will not be able to pay back its $72 billion public debt, a spokesman told the Associated Press late Sunday.
Gov. Alejandro Garcia Padilla's spokesman, Jesus Manuel Ortiz, confirmed that the island's government is seeking to defer payments while negotiating with creditors.
He confirmed comments by Garcia that appeared in a report in The New York Times published late Sunday, less than a day before Garcia is scheduled to deliver a public address amid debate on a $9.8 billion budget that calls for $674 million in cuts and sets aside $1.5 billion to help pay off the debt. The budget has to be approved by Tuesday.
"There is no other option. I would love to have an easier option. This is not politics, this is math," Garcia is quoted as saying in the Times.
The island's debt figure is four times that of Detroit, according to the Washington Post.
Puerto Rico's bonds were popular with U.S. mutual funds because they were tax-free, but hedge funds and distressed-debt buyers have been stepping in to buy up the debt as the island's economy worsened and its credit rating dropped.
Puerto Rico's constitution dictates that the debt has to be paid before any other financial obligation is met. If Garcia seeks to not pay the debt at all, it will require a referendum and a vote on a constitutional amendment, said Rep. Jenniffer Gonzalez, spokeswoman for the main opposition party.
She said in a phone interview that she was taken aback by Garcia's comments, which came out just hours before he was scheduled to meet with legislators.
"I think it's irresponsible," Gonzalez said. "He met privately with The New York Times last week, but he hasn't met with the leaders of this island."
Puerto Rico's central government could run out of cash as soon as July, possibly leading to a government shutdown, according to the Wall Street Journal.
“This is going to be painful for the next two to three years,” Rep. Pedro Pierluisi, D-Puerto Rico, told the paper. Pierluisi, the Resident Commissioner of Puerto Rico, is the island's non-voting representative to the U.S. House.
Puerto Rico's situation has drawn comparisons to Greece, where the government decreed this weekend that banks would be shuttered for six business days and restrictions imposed on cash withdrawals. The country's five-year financial crisis has sparked questions about its continued membership in the 19-nation shared euro currency and the European Union.
Puerto Rico's governor recently confirmed that he had considered having his government seek permission from the U.S. Congress to declare bankruptcy amid a nearly decade-long economic slump. His administration is currently pushing for the right for Puerto Rico's public agencies to file for bankruptcy under Chapter 9. Neither the agencies nor the island's government can file for bankruptcy under current U.S. rules.
Puerto Rico's public agencies owe a large portion of the debt, with the power company alone owing some $9 billion. The company is facing a restructuring as the government continues to negotiate with creditors as the deadline for a roughly $400 million payment nears.
Garcia has taken several measures to help generate more government revenue, including signing legislation raising the sales tax to 11.5 percent and creating a 4 percent tax on professional services. The sales tax increase goes into effect Wednesday and the new services tax on Oct. 1, to be followed by a transition to a value-added tax by April 1.
Source>http://www.foxnews.com/politics/2015/06/28/puerto-rico-governor-warning-that-public-debt-unpayable/
Posted by theodore miraldi at 7:34 AM