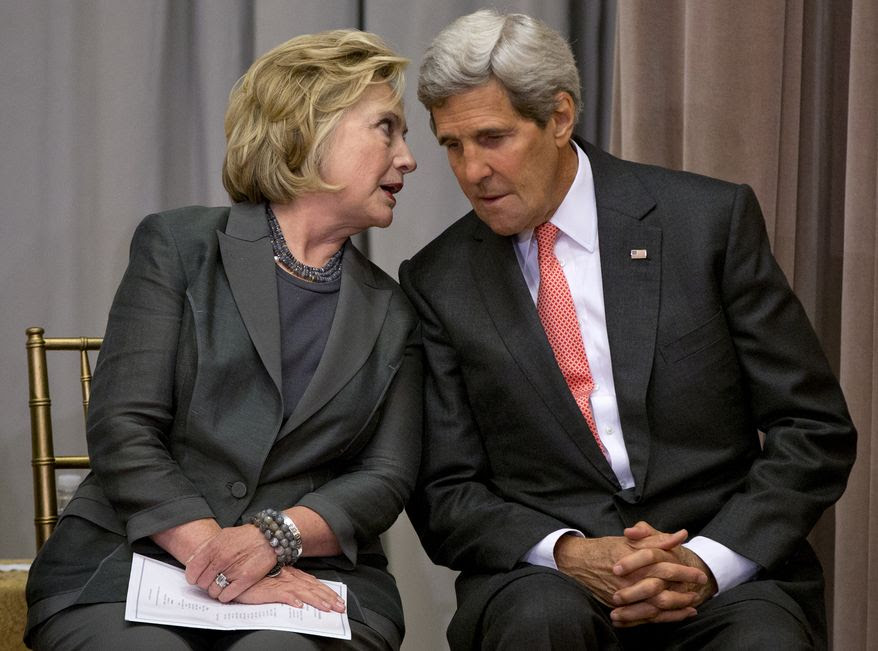 Photo by: Carolyn KasterSecretary of State John Kerry speaks with former Secretary of State Hillary Rodham Clinton during the groundbreaking ceremony for the U.S. Diplomacy Center, Wednesday, Sept. 3, 2014, at the State Department in Washington. Kerry hosted five of his predecessors in a rare public reunion for the groundbreaking of a museum commemorating the achievements of American statesmanship. (AP Photo/Carolyn Kaster)

By Guy Taylor and John Solomon


In a disclosure that could have political

implications for election campaigns, the State Department’s chief watchdog reported Thursday that worker harassment complaints have nearly tripled inside the department during the tenures of Hillary Rodham Clinton and John F. Kerry — but the department still doesn’t have mandatory training for all employees.
“A significant increase in reported harassment inquiries in the Department of State over the past few fiscal years supports the need for mandatory harassment training,” the department’s inspector general warned in an oversight report that reviewed the agency’s Office of Civil Rights.
The report states that formal harassment claims rose from 88 cases in 2011, during Mrs. Clinton’s third year as America’s top diplomat, to 248 in 2014, Mr. Kerry’s second year as secretary. Hundreds more informal complaints were lodged during the same period.
Last year, 43 percent of the new complaints alleged harassment or unfair hirings or promotions, while 38 percent raised sex discrimination or reprisals, the report said.
While the increase in claims is dramatic, OIG officials maintained that it may actually be attributed to growing knowledge and awareness among employees about sexual harassment issues and the procedures for reporting it.
But Thursday’s report also appeared to chide current Secretary of State Kerry and Mrs. Clinton — who served as secretary from January 2009 through early 2013 — for failing to order department managers to require that all employees receive both initial and regularly updated training on such issues.
The document asserts that in 2013, Mr. Kerry “issued a statement on discriminatory and sexual harassment and emphasized in his message to department employees his commitment to prevent and eliminate discrimination and sexual harassment in the work place.”
“Mandatory training for department employees would strengthen this message and ensure that all employees are aware of their responsibilities and rights,” the report states.
Its revelations, along with the explicit recommendation that the Office of Civil Rights “should mandate periodic harassment training for all department employees,” triggered a sober reaction from officials on Thursday.
State Department spokesman John Kirby told reporters that there is “nothing that Secretary Kerry takes more seriously than making sure that everybody here at the State Department is treated with dignity and respect, and he has zero tolerance for harassment of any kind, sexual or otherwise.”
But Mr. Kirby declined to comment on whether Mr. Kerry or anyone else at the department intends to take action toward creating a mandatory harassment training program. “I’m not going to get ahead of decisions that the secretary will or won’t make about the recommendations,” he said.
Mr. Kirby acknowledged that the Pentagon, another major federal agency, where he previously served as a senior spokesman, already has a mandatory harassment training program in place.
Other officials noted how such programs also exist at the Federal Emergency Management Agency, which is comparable to the State Department because its some 15,000 employees are spread across offices far flung from Washington

.
But the State Department is much larger than FEMA. In addition to roughly 13,000 career foreign service officers, the department employs some 11,000 contractors and more than 45,000 locally hired employees at embassies and diplomatic posts in nearly every corner of the world.
According to the U.S. Equal Employment Opportunity Commission, which oversees harassment training policies at all federal agencies, there is no particular mandatory training requirement for sexual harassment.
It was not immediately clear Thursday what level, or regularity, of harassment training is currently being offered to those different subsets of employees. One official, speaking on background, told The Washington Times everyone got some training about sexual harassment issues at least once upon being hired by the department, or so the official believed.
Thursday’s OIG report did credit the Office of Civil Rights with making strides toward improving the quality, speed and quantity of its work in recent years but asserted that performance issues remain — such as a need to rebalance workloads, reassess positions and complete delinquent performance evaluations.
The office also currently has two civil rights complaints pending against itself, according to the report, although specific details were not provided.
The report also warned that the “increase in harassment cases has [Office of Civil Rights] Legal Section working frequent long hours with no increase in staff.”
The OIG maintained that the office’s Equal Employment Opportunity Counselor Program suffers from “shortcomings” that are now being addressed by managers, such as employees failing to attend refresher courses and inadequate counseling for some employees.
Impact on Clinton’s legacy?
Thursday’s report may be politically relevant because it could be read as a challenge to Mrs. Clinton’s reputation for aggressively and regularly speaking out against all forms of discrimination — especially against women — during her years as secretary of state.
The document’s release comes as Mrs. Clinton now seeks to make improving women’s rights a centerpiece of her campaign for president in 2016.
In recent speeches she has said that women’s rights no longer can be separate from the arguments of basic human rights and that protections for women are no good if laws are not aggressively enforced.
“All the laws we passed don’t count for much if they are not enforced,” Mrs. Clinton said during a speech back in April. “Rights have to exist in practice, not just on paper. Laws have to be backed up with resources and political will, and deep-seated cultural codes, religious beliefs and structural biases have to be changed.”
The former secretary of state was revered by many for pushing a similar message during her years as the top diplomat at Foggy Bottom.
Mrs. Clinton’s presidential campaign office did not respond to a request for comment on Thursday.
In the back hallways of the State Department’s headquarters, meanwhile, officials, speaking candidly, said that it would be a mischaracterization to portray the department as a place where harassment and discrimination is anything but frowned upon.
There is also a general feeling among the department’s rank and file that the rise in harassment claims likely stems from a general increase of awareness about such issues that occurred during Mrs. Clinton’s tenure as secretary — since she was so publicly known to advocate for such awareness.
Source>http://www.washingtontimes.com/news/2015/jun/18/sexual-harassment-complaints-state-department-soar/#ixzz3dVntxRfU
Posted by theodore miraldi at 8:53 AM