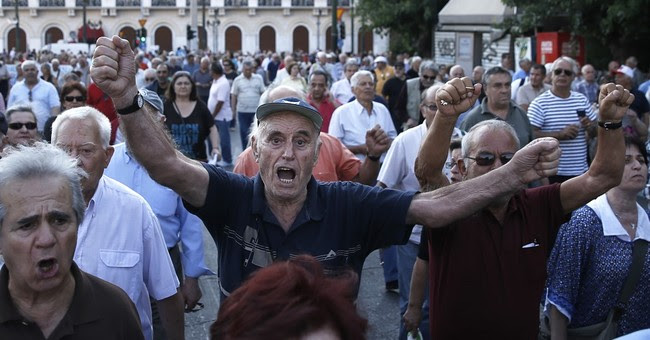 
For almost six years Greece has been on the cusp of financial disaster. Its Northern European and international creditors have extended loans, suspended interest payments and forgiven some debt.
But European lenders have also stubbornly kept to the old-fashioned principle that debtors freely borrowed their money from lenders, and therefore most borrowed money must be paid back, regardless of the current financial status of the debtors.
Greece counters that after all sorts of austerity budgets, it simply can no longer inflict the necessary pain on its relatively tiny population to squeeze out enough cash to pay its well-off creditors. In other words, borrowed money only sometimes must be paid back -- depending on the relative wealth of the respective borrower and lender.
Economists still bicker over what caused the crisis. Was it Greek structural inefficiencies coupled with appetites for expensive foreign imports that Greeks could not afford? In the last decade, high-priced Mercedes cars became as common in Athens as the swimming pools that dotted the Aegean landscape.
Was the Greek tragedy more due to endemic corruption, rampant tax evasion and cronyism? Longtime residents of Greece knew that it was a national pastime to conduct business off the books, to give discounts for non-reportable cash payments, and to cram boated state bureaucracies with friends and cronies.
Or maybe the borrow-and-spend spree could have continued were it not for the 2008 financial meltdown on Wall Street that stopped the merry-go-round of lending and borrowing?
Politicians likewise fight over the best ways to solve the crisis.
Write off the Greek debt but make Greece abandon the euro and perhaps the European Union as well? Or write off the debt but only in exchange for radical reforms in the Greek economy that will preclude another borrowing spree? Or write off the debt and just let Greece do as it pleases?
Behind all the acrimony is an unspoken Greek assumption that has nothing to do with either economics or politics, but reflects a growing trend around the world.
The thinking goes something like this. The rich Northern Europeans have more money per capita than do the Greeks. They could write off the entire Greek debt and not really miss what they lost. In the Greek redistributionist mindset, why should one group of affluent Europeans grow even wealthier off poorer Europeans?
Athens has adopted the equality-of-result mentality that believes factors other than hard work, thrift, honesty and competency make one nation poor and another rich. Instead, sheer luck, a stacked deck, greed or a fickle inheritance better explain inequality. Fate or cosmic unfairness can result in good but poor people owing money to bad but wealthy people.
Default, then, is sometimes morally justified. The Greeks fault their most prominent creditor, Germany, for its cruel past Nazi occupation of Greece, for its cold obsessions with the financial bottom line, and for its ethnocentric manipulation of the euro and the EU itself.
Something similar to the Greek mindset arose during the U.S. housing bubble and collapse of 2008.
Millions of Americans unwisely took out subprime mortgages for houses they could not afford and then walked away from their debt when the economy tanked. They understandably blamed Fannie Mae and Freddie Mac, avaricious Wall Street speculators, rah-rah realtors and dishonest banks that pushed overpriced homes and mortgages onto the unsuspecting.
The current student debt fiasco is also similar. Young people who have little money owe lots of it -- $1 trillion in aggregate -- to banks that already have lots of it.
It no longer matters how the debt was incurred, only that poor students and ex-students are unlikely to pay most of it back.
Everybody but students is supposedly to blame. The universities constantly upped tuition costs while pushing loan packages on students. The weak economy offered few good jobs to the recently graduated and indebted. The government foolishly guaranteed the loans and thus greenlighted greedy campuses and banks to charge whatever they pleased.
Students are as likely to pay back their $1 trillion as Greece is its $350 billion.
The Obama administration is sympathetic to the mindset of debtors. Its sloganeering suggests that wealth creation is either not really the work of the individual ("you didn't build that") or something that reflects greed rather than thrift ("I do think at a certain point you've made enough money").
Greece will not pay because an increasing number of nations in the Western world do not look at borrowed money as a contractual agreement that is central to a modern economy. Instead, they see renouncing debt as both a moral act and a reasonable method of wealth redistribution.
Payback depends not on who legally agreed to what with whom--but on who has money and who doesn't.


In short, debt has been redefined as equality and fairness.
Source>http://townhall.com/columnists/victordavishanson/2015/06/25/why-greece-wont-pay-n2016822?utm_source=thdaily&utm_medium=email&utm_campaign=nl&newsletterad=
Posted by theodore miraldi at 8:44 AM