Rely on FEMA food stockpiles? Good luck. Maybe 2 meals each for 1% of population

WASHINGTON – Between the Red Cross, National Guard, Army Corps of Engineers and FEMA, all of whom respond to emergencies and disasters, America should be reasonably well-prepared for floods, fires, terror attacks and other major catastrophes, one might think.

Yet, in a dizzyingly high-tech era in which energy and communications grids are increasingly vulnerable to malicious attack, a nationally recognized security exit warns that any one of a series of catastrophic events could conceivably so disrupt the nation’s supply chain of food, water and medical supplies that regional shortages might persist for a period of years, a nightmare scenario that could result in millions of American deaths.
In an interview with WND, Barrett Moore, founder of the legendary global security company Triple Canopy, warns starkly that America’s infrastructure is “collapsing,” and if “any one or all of 15 key structural elements within the supply chain are impacted, we’re done.”
Moore today runs “360.TM,” which provides solutions to the various vulnerabilities of the nation’s supply chain, including the design, construction and equipping of safe havens, as well as consulting on threat assessment and creating emergency operations centers and transportation services.
“The day-to-day operation of our society is predicated on peace and ongoing prosperity, along with a steady fuel supply, stable currency and civil order,” Moore told WND. And yet, he added, “no provision exists for emergencies wherein fuel becomes scarce, data does not flow, the currency collapses, or civil order breaks down.”
The United States is simply unprepared, he says, for the unfolding of major chaotic events, adding that Americans “will remain vulnerable” as long as they have no “secure location” to which they can retreat.
Any number of major developments could have a direct impact on the vulnerability of U.S. supply chains, says Moore.
For instance, the food delivery supply chain is increasingly vulnerable, he said, noting that “the average meal” travels some 2,500 miles from farm to table, 25 percent further than two decades ago.
image: http://www.wnd.com/files/2015/09/Food-stockpiles.jpg 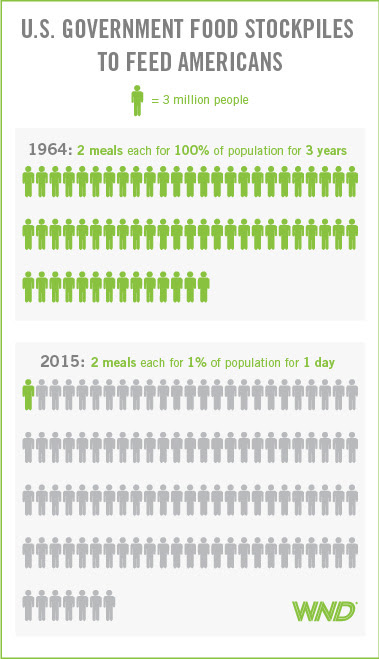 Moore also referred to the inadequacy of the government’s own preparation efforts with regard to food reserves for the population.


“In 1964, the federal government maintained stockpiles capable of feeding the entire population for a period of three years,” he said. “Some 50 years later, the Federal Emergency Management Agency has admitted to a stockpile of a mere six million meals.
“Given our population of over 300 million people, this would feed but one percent of the population [two] meals per day for one – yes, only one – day,” Moore warned.
“Few people appreciate what this means,” he added, saying such “indifference to supply chain operations despite heavy dependence on them and the criticality of their nature is more pronounced in urban areas.”
Indeed, he stressed, second only to the American homeland’s physical security, “these complex and intertwined logistics systems are essential to the functioning of our urban centers.”
In addition to physical attacks on the American homeland, including an electromagnetic pulse (EMP) attack – which top experts, including former CIA Director R. James Woolsey, say are increasingly likely – Moore called cyber attacks “the greatest threat to U.S. national security,” especially to the financial system which depends on the cyber infrastructure.
“Due to increasingly sophisticated, frequent, disruptive and often undisclosed attacks from foreign governments, criminal entities and lone actors, it is only a question of time until we experience a devastating cyber attack,” Moore warned.
In the same way, he said, emergency medical supplies are “insufficiently stockpiled in this country, with inventories so low in most commercial medical organizations due in part to supply chain efficiencies,” he said. “Profitability trumps stockpiling and emergency availability takes low priority.”
Today, he said, supply chain systems are more complicated and, unfortunately, also demonstrate “less elasticity and less redundancy.”
Therefore, he explained bluntly, “if certain systems fail, we will not eat or heat our homes, much less maintain our current standard of living.”
So, even though “as a nation steeped in a buy-now-pay-later immediate-gratification 24-7 culture,” Americans are able to get “want what we want when we want it,” he says, “the abundance we experience today could turn to scarcity tomorrow, rendering foolhardy those who don’t contemplate and prepare.”
Bottom line: “All supply chains are eventually disrupted,” Moore said, referring to Oxford historian Bryan Ward-Perkins, who warned that the economic complexity that produces a wide variety of manufactured goods also results in its very vulnerability. The historian referred, as an example, to the collapse of Rome’s supply chains after the fifth century barbarian invasions.
“What we observed at the end of the Roman world is not a ‘recession,’” Ward-Perkins said. “Instead, what we see is the disappearance of entire industries and commercial networks.”
Referring to Ward-Perkins’ book, “The Fall of Rome and the End of Civilization,” Moore added that the U.S., with an advanced economy, is increasingly “vulnerable because of its tendency to specialization.”
In fact, in a chapter on that very subject, Ward-Perkins wrote: “If the ancient economy had consisted of a series of simple and essentially autonomous local units, with little specialization of labor within them and very little exchange between them, then parts of it would certainly have survived the troubles of post-Roman times. However, because the ancient economy was in fact a complicated and interlocked system, its very sophistication rendered it fragile and less adaptable to change.”
The lesson from this observation, said Moore, “is obvious, and begs acknowledgement from Americans today.”
“No nation or generation has been more specialized than ours,” Moore said. “And no nation is more vulnerable.”