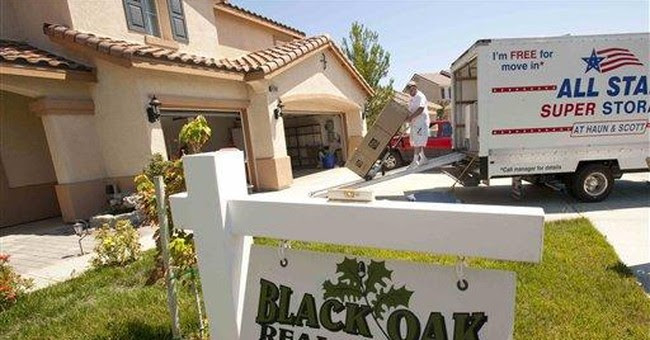 
So-called progressives love to talk about how their policies will create a workers' paradise. Why is it, then, day after day, month after month, year after year, people are fleeing liberal blue states for conservative red states?
New census data on where we live and where we moved to in 2014 shows that the top seven states with the biggest percentage increases in inbound migration from other states are, in order: North Dakota, Nevada, South Carolina, Colorado, Florida, Arizona and Texas. All of these states are politically red, except Colorado, which is purple.
Meanwhile, the leading exodus states, in percentage terms, are: Alaska, New York, Illinois, Connecticut, New Mexico, New Jersey and Kansas. These states, except Alaska and Kansas, are blue.
The latest "Rich States, Poor States" document (which I co-author), published by the American Legislative Exchange Council, finds that nearly a net 1,000 people each day are leaving blue states and entering red states. This migration is changing the economic center of gravity in America -- shifting it relentlessly to the South and West.
Travis Brown, author of the indispensable book "How Money Walks," shows that two of the leading factors behind this movement of human capital are: 1) whether a state has a right-to-work law (half the states do), and 2) how high the top state income tax rate is. Nine states have no income tax, and they are creating jobs at twice the pace as high income-tax states.
Data from the Internal Revenue Service show a similar trend. Each year, the IRS issues a migration data report that examines how many tax filers (and dependents) changed their residencies and how much income was transported from one state to another. The numbers for the most recent year (tax filing year 2013) are gigantic and put the lie to the claim that interstate migration is too small to matter in terms of the wealth and economic opportunity in one state versus another.
In 2013, Florida gained $8.2 billion in adjusted gross income from new arrivals. Texas gained $5.9 billion. Five of the seven states with the biggest income gains -- Florida, Texas, Arizona, Washington and Nevada -- have no income tax.
New York again was the big loser, with another 112,236 tax filers leaving and taking $5.2 billion with them. (So much for those TV ads trying to lure businesses into America's second-highest-taxed state with temporary tax breaks.) Illinois lost nearly 67,000 tax filers and $3.7 billion of income that it can no longer tax.
I've never met a Democrat who could come up with even a semi-plausible explanation for why families and businesses are getting out of blue states. They are leaving states with higher minimum wages, pro-union work rules, high taxes on the rich, generous welfare benefits, expansive regulations to "help" workers, green energy policies, etc. People are voting with their feet against these liberal policies.
When I debated New York Times columnist Paul Krugman this summer, I confronted him with this reality. His lame explanation for the steady migration from the liberal North to the conservative South was that "air conditioning" has made the South more livable. Americans are evidently moving because of the weather.
There are two glaring problems with this theory: California and North Dakota. During the decade ending in 2013, 1.4 million more Americans left California than moved into the once-Golden State. It's a good bet these California refugees didn't leave for more sunshine or better weather.
And if warm weather is what is attracting people to the South -- and surely there is some truth to that -- why did the coldest state outside Alaska -- North Dakota -- have the biggest population gain in percentage terms in the most recent year? The answer is that workers went to get jobs created by the Bakken Shale oil and gas boom.
By the way, California is one of the states richest in oil and natural gas, but its "green" politicians are regulating that industry out of business. So much for caring about working-class Americans.
The latest census and IRS data merely confirm what Americans can see every day with their own eyes. Red states are a magnet. There's a downside to this for sure. Conservatives have a legitimate gripe that when blue-staters relocate into prosperous red states they try to turn them blue. That's happened in New Hampshire, where Massachusetts transplants vote for the left-leaning policies they just fled.
Source>http://townhall.com/columnists/stephenmoore/2015/09/29/americans-still-voting-with-their-feet-fleeing-blue-states-n2058318/page/full
Posted by theodore miraldi at 12:24 PM