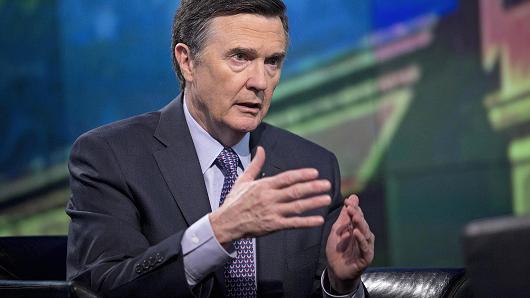 Federal Reserve Bank of Atlanta President Dennis Lockhart said while recent market volatility raised risks to the U.S. economic and inflation outlook, he remains confident the central bank will raise interest rates this year.
Calling it a “close call” by the Federal Open Market Committee last week to hold interest rates near zero, Lockhart said Monday that he had voted with the majority as “prudent risk management around recent and current market volatility.”
“As things settle down, I will be ready for the first policy move on the path to a more normal interest-rate environment,” he said in a speech in Atlanta. “I am confident the much-used phrase ‘later this year’ is still operative.”
Lockhart’s comments align him with three other regional Fed presidents -- San Francisco’s John Williams, St. Louis’s James Bullard and Richmond’s Jeffrey Lacker -- who argued over the weekend for lifting the central bank’s key interest rate before year’s end, just days after the Federal Open Market Committee opted to leave rates near zero.
Chair Janet Yellen, in a post-FOMC press conference on Thursday to explain the decision, cited financial market turmoil and slowing growth in China as raising doubts about the outlook for U.S. growth and inflation. Yellen will deliver a speech on Sept. 24 in Amherst, Massachusetts, granting herself another opportunity to communicate the Fed’s policy view.
Lockhart told the Buckhead Rotary Club that the Fed had achieved its desired requirement of “further improvement in labor markets,” but the recent volatility cast doubt on the desired “reasonable confidence” that inflation will return to the Fed’s 2 percent target.

“Even so, I have gotten comfortable enough on the inflation question to take a first step in one of the coming FOMC meetings in what will likely be an extended process of normalization of the interest-rate environment,” he said.
Inflation expectations appear well anchored and continuing expansion of the economy should result in tightening in labor markets, Lockhart said.
Lockhart said policy makers focused on market volatility only because it suggests the risk of impact on the U.S. economy.
“About a month ago, uncertainties loomed larger, market volatility rose, and, from a policy maker’s perspective, risks to the domestic economy ratcheted up a little,” he said. “It’s too early to know whether this episode amounts to a bona fide shock to the economy or just a nervous spasm in the markets.”

Lockhart cited slowing growth in China and concern over emerging markets amid falling commodities prices as causes of the volatility. The direct impact of China on the U.S. doesn’t appear large, he said.
“My summary assessment is that the sources of uncertainty that fueled financial market volatility represent a modest risk to our economy, but a risk factor nonetheless,” he said.
“The domestic economy appears to me to be ready for the beginning of normalization,” he told reporters after the speech. “I think it was a close call for the committee as a whole. Others have used that term and I agree,” he said, describing the FOMC decision to delay liftoff.
Most FOMC participants expect a rate increase this year, according to their forecasts released last week. Investors are less persuaded the central bank will follow through. Trading in federal funds futures indicates a 20 percent probability of a rate increase at the Oct. 27-28 FOMC meeting and 49 percent chance of an increase by the gathering on Dec. 15-16.
While U.S. unemployment has fallen to 5.1 percent, close to the Fed’s estimate of full employment, inflation remains far from the goal. The Fed’s preferred gauge of inflation has remained under its 2 percent target since April 2012 and rose 0.3 percent in the year through July.
The Fed has kept its benchmark policy rate near zero since December 2008.
Source>http://www.bloomberg.com/news/articles/2015-09-21/fed-s-lockhart-favors-interest-rate-liftoff-later-this-year
Posted by theodore miraldi at 5:19 PM