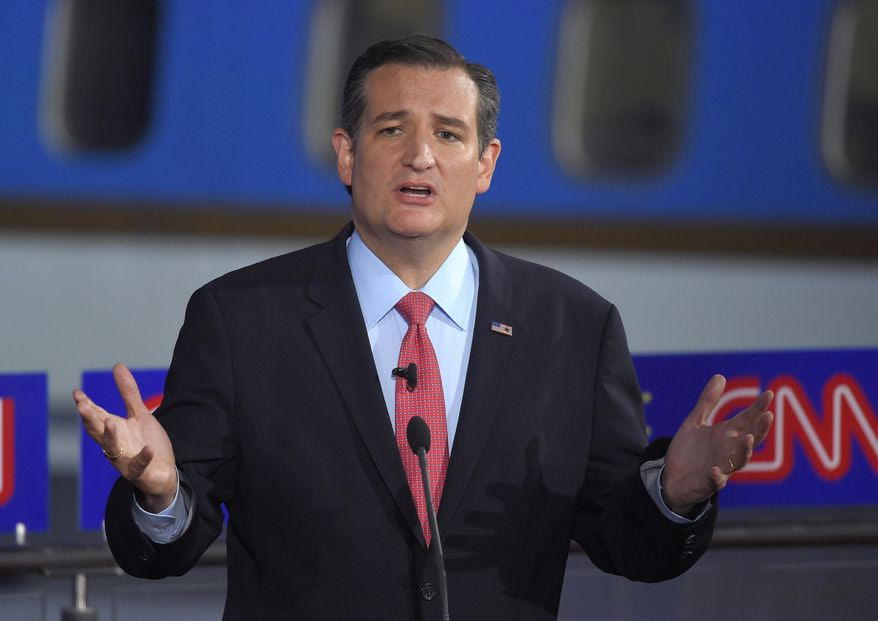 Republican Sen. Ted Cruz cued up the GOP’s opening bid Thursday to avert a government shutdown by accusing his own party’s leaders of surrendering before the fight, saying they’ve allowed President Obama and his Democratic allies to pull the strings in Washington despite a “tidal wave” of Republican success in the 2014 mid-terms.
Mr. Cruz, Texas Republican and 2016 presidential contender, accused Senate Majority Leader Mitch McConnell and House Speaker John A. Boehner of assuming that Democratic leaders, like the “Terminator,” will never stop and never blink.
In essence, he said Senate Minority Leader Harry Reid and House Minority Leader Nancy Reid are still the “de facto” leaders of Congress, even though the GOP retook the Congress one year after he pushed a failed bid to defund Obamacare as part of a 2013 spending showdown, leading to a 16-day government shutdown.
“What difference does it make, to paraphrase Hillary Clinton, whether we have a Republican Congress?” Mr. Cruz told reporters, invoking the 2016 Democratic front-runner’s testimony before the panel investigating the attacks in Benghazi, Libya.
Congress is staring at yet another government shutdown next week, as Senate Democrats are set to reject a GOP-authored bid Thursday to avert a government shutdown while redirecting millions in taxpayer funds from the controversial Planned Parenthood organization.
With regular funding bills stalled, Mr. McConnell said Congress should fund federal operations through Dec. 11 to buy enough time for Congress to negotiate funding for the rest of fiscal 2016.
But he also asked the Senate to redirect $235 million from Planned Parenthood to community health centers, a response to swirling controversy over videos that appear to show organization officials negotiating the sale of organs from aborted fetuses, to be used for research.
Once that vote fails, Mr. Cruz and his conservative House allies expectGOP leaders to offer a “clean” spending resolution that does not touch Planned Parenthood.
For Republican leaders, the strategy would prove to hard-liners that because of Senate rules that protect the minority, there simply aren’t the votes.
They’ve promised to not shut down the government, instead pleading with the rank-and-life to push back against Planned Parenthood through investigations and stand-alone votes, although Mr. McConnell is lobbing a shot at the controversial organization with his first offer on spending.
But Mr. Cruz said his own party has promised to surrender instead of leveraging “must-pass” legislation to risk a shutdown and force President Obama to blink first.
“You don’t even have to guess on it,” he said.
Mr. Cruz said while Democrats play the “Terminator,” Republican leadership listens only to “Jerry McGuire” types on K Street who say, “Show me the money.”
From Mr. Obama’s immigration amnesty to the Iran nuclear deal to confirmation of Attorney General Loretta Lynch, Mr. Cruz said the Republican leadership has caved to Democrats.


“What the Republican Party has accomplished is passage of the Democratic agenda,” he said.
Source>http://www.washingtontimes.com/news/2015/sep/24/ted-cruz-pelosi-reid-are-de-facto-leaders-congress/
Posted by theodore miraldi at 3:21 PM