Germany in a state of SIEGE

Merkel was cheered when she opened the floodgates to migrants. Now, with gangs of men roaming the streets and young German women being told to cover up, the mood's changing

On the busy shopping street in Giessen, a German university town twinned with Winchester, migrant Atif Zahoor tucks into a chicken dish with his brother and cousin at the curry restaurant Chillie To Go.
They have left good jobs back in Karachi, Pakistan, and now want to be Europeans.
In late July the three slipped into Germany with their wives and children, using illegal documents. They live together in a five-bedroom house, rented for them by Chancellor Angela Merkel’s government, a 40-minute drive away from Giessen, which is home to the biggest migrants’ camp in the country. 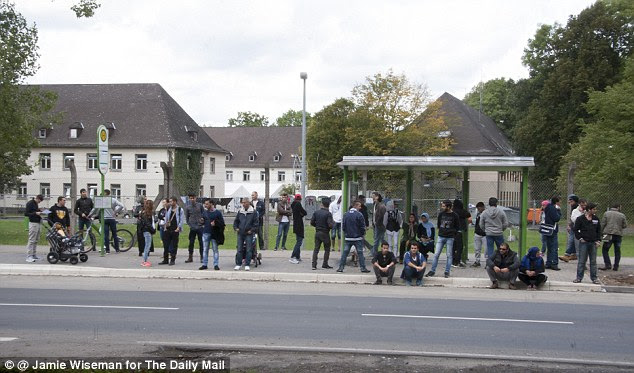 +13
Migrants and refugees pictured waiting for a bus outside the Migrant Receiving Camp on the outskirts of the German city of Giessen. Social workers and women's groups warned that facilities were hopelessly inadequate and security was a problem for female residents 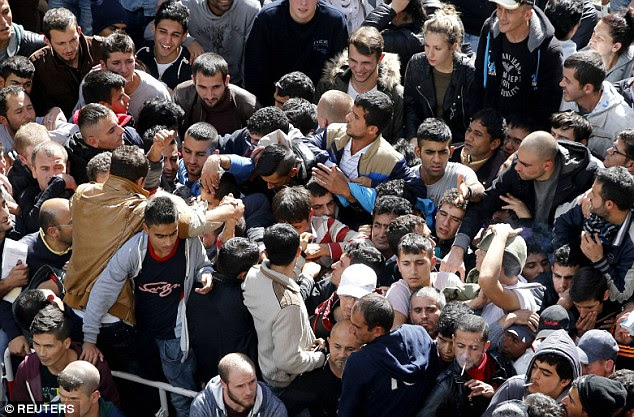 +13
Migrants and refugees queue at the compound outside the Berlin Office of Health and Social Affairs as they wait for their registration. But there are warnings that millions more newcomers should be expected in the current migrant crisis
‘We paid a trafficking agent for false visas to fly here to Germany,’ says 34-year-old Atif. ‘We claimed asylum and came to Giessen camp with other migrants. Three weeks ago, because we had families, they gave us a proper home.’
Atif is well-dressed and speaks perfect English. He used to be a transport manager at Karachi airport and is from a well-to-do family. Between mouthfuls of curry, he adds: ‘But there is violence between political gangs in Karachi. Lots of people are leaving for Europe. The trafficker decided that Germany was the place for us because it is welcoming refugees.’
There is violence between political gangs in Karachi. Lots of people are leaving for Europe.
Atif, 34, from Pakistan
Yet the raw truth is that Atif is not fleeing war or persecution. He is one of thousands of economic migrants getting into Germany as the EU’s immigration crisis grows bigger each day.
This week, David Cameron said Europe must send failed asylum claimants back to their own countries, while European Council president Donald Tusk has warned that millions more migrants are on their way and ‘the policy of open doors and windows’ must be scrapped.
They are tough words, but it’s action that is needed. As Jens Spahn, a deputy finance minister in Chancellor Merkel’s government, said this week: ‘Not everyone can stay in Germany, or in Europe. If people are coming for poverty reasons... we have to send them back.’
Mrs Merkel’s offer last month to accept all refugees from war-ravaged Syria opened the floodgates. More than a million migrants are expected this year alone, the bulk of them far from genuine asylum seekers. There is now deepening disquiet in this Christian country, dotted with churches, that it is being overwhelmed by people of a different religion and culture. 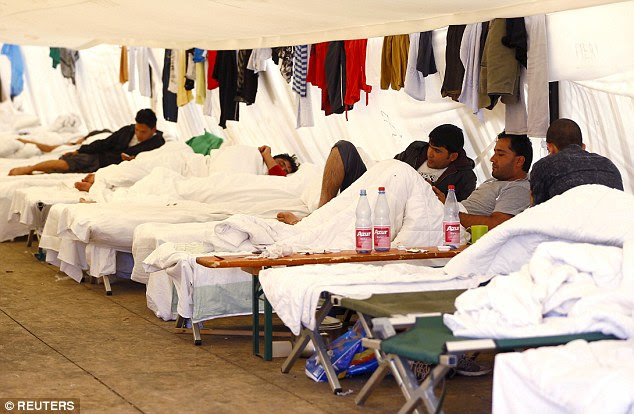 Refugees from Afghanistan and Pakistan inside a tent shared by more than 60 men at the refugee registration center for the German state of Hesse in Giessen, 40km southwest of Frankfurt 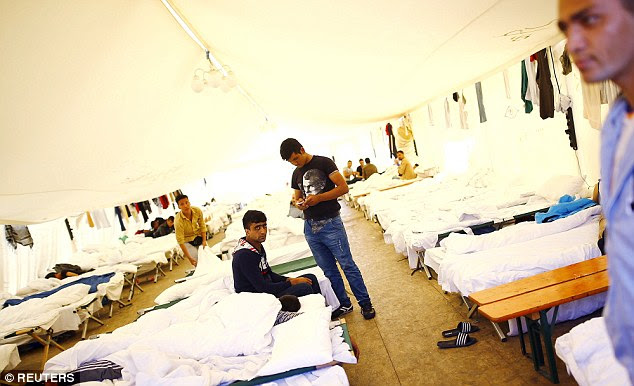 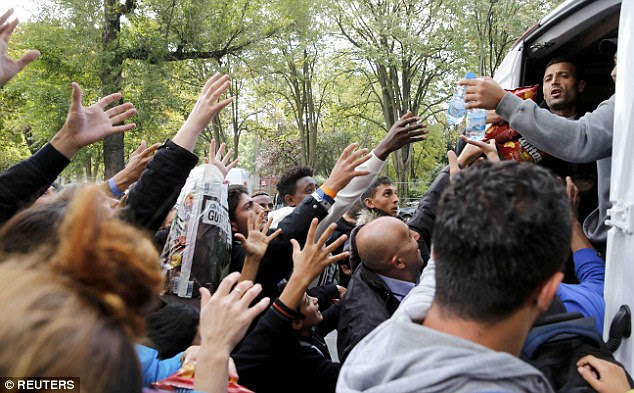 Loaded: 0%
Progress: 0%
00:00
Play
Mute
Current Time0:00
/
Duration Time1:44
Fullscreen
Locals in Giessen are appalled by the rape allegations. But many are also increasingly worried about the effect of the migrants — some 6,000 Syrians, Iraqis, Pakistanis, Kurds, Eritreans and others are housed in the camp, which was expanded last year — on their everyday lives.
Some complain that the migrants have taken over the town, which is famous for its botanical gardens and dotted with pretty boutiques and flower shops. You cannot miss the new arrivals, wandering the streets in large groups.
This situation is opportune for those men who already regard women as their inferiors and treat unaccompanied women as “fair game”.
Letter written by social workers and women's groups in the Giessen camp
At the Lidl supermarket a few hundred yards from the camp, a well-dressed German woman packing her shopping into a Mercedes saloon rolls her eyes at me as a group of Middle Eastern youths walk by. ‘What do we do?’ she asks. ‘It has happened now and it will never be the same again.’
Some of the tales being told in Germany may just be xenophobic scaremongering. But there is no doubt that the country is grappling with a major culture clash as migrants pour in at the rate of 100 an hour or more.
At other camps among the 2,000 that have sprung up in Germany, I hear various lurid complaints about the arrivals, 80 per cent of whom are Muslim, single and male.
At a former U.S. military base housing some 2,000 migrants in Bayernkaserne, on the outskirts of Munich, women’s rights groups say there is forced prostitution and rape every day. Men, women and children sleep next to each other in tents and, according to one social worker interviewed on local TV, the camp is ‘the biggest brothel in the city’ where the price for sex with a female migrant is €10 (£7). 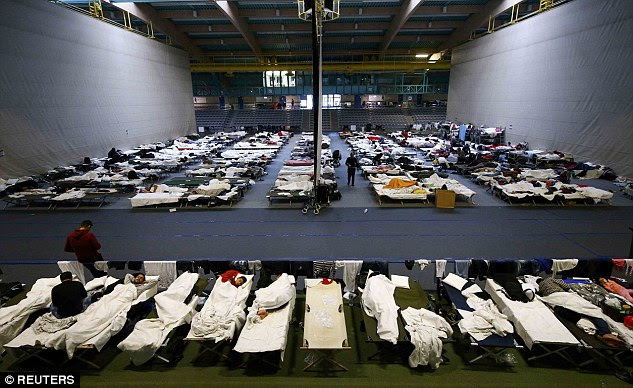 +13
Migrants and refugees rest on beds at an improvised temporary shelter in a sports hall in Hanau, Germany, this week. EU border guard agency Frontex has warned a market in fake Syrian passports has sprung up, particularly in Turkey, to help migrants and refugees enter the EU 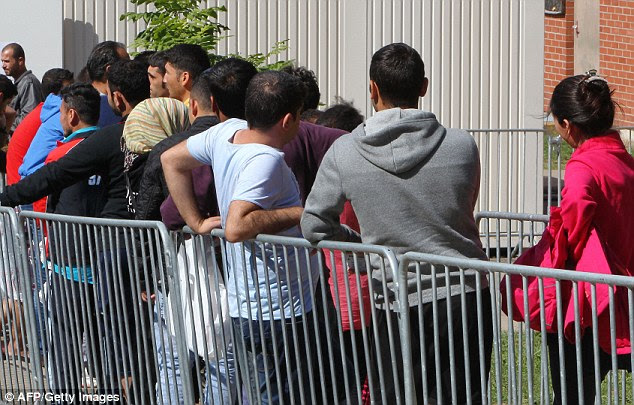 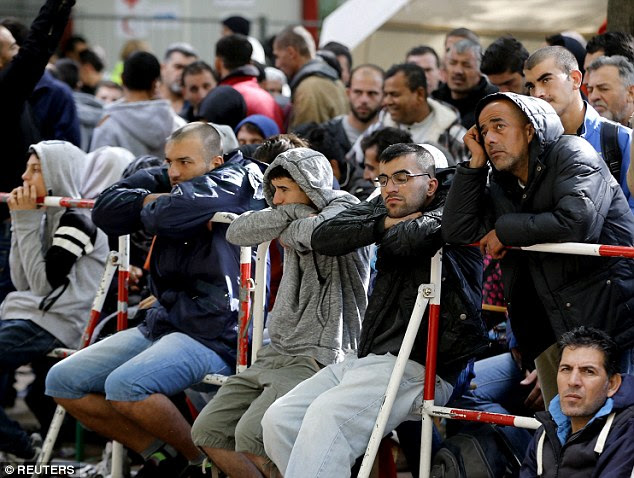 +13
Refugees and migrants wait at the compound outside the Berlin Office of Health and Social Affairs this week. A Berlin official today revealed they now think 30 per cent of those claiming to be from Syria are not telling the truth 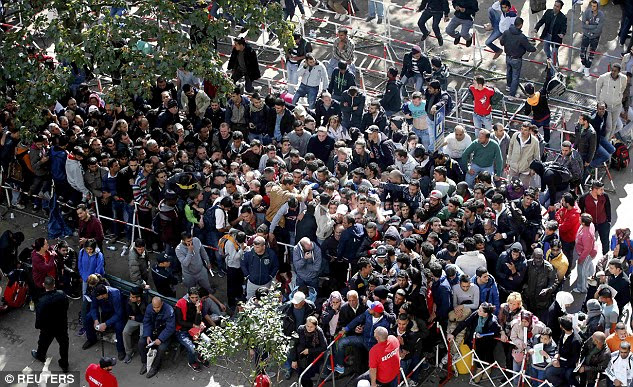 +13
Refugees queue at the compound outside the Berlin Office of Health and Social Affairs as they wait for their registration in Berlin this week. Germany has become Europe's top destination for asylum seekers
Germany welcomes migrants offloaded by Hungary 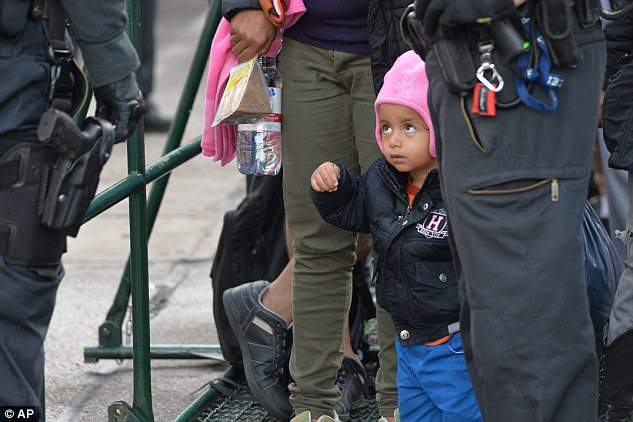 +13
A young refugee waits at the rail station in Freilassing, southern Germany. The country now expects to welcome up to a million newcomers 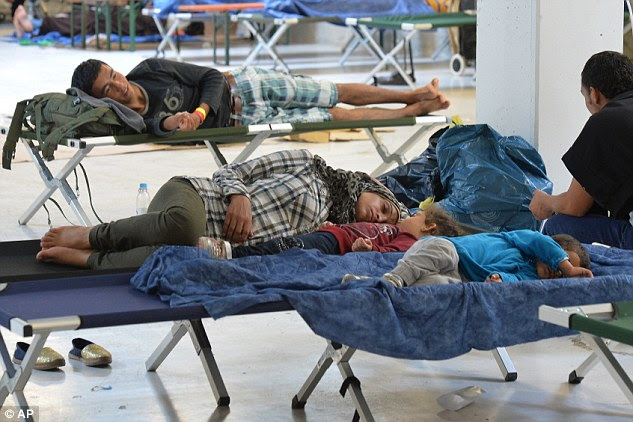 +13
Refugees rest in a former furniture factory after crossing the border from Austria in Freilassing, southern Germany. EU leaders have pledged at least 1 billion euros ($1.1 billion) for Syrian refugees in the Middle East
Meanwhile, the migrants keep arriving. Many have deliberately thrown away their passports on their journey through Europe, so they can pretend to be Syrian refugees rather than economic migrants.
The authorities, now being urged by both the EU and Germany’s leaders to return those who aren’t genuine, are completely overwhelmed.
At Freilassing, on the border with Austria, I see hundreds of migrants waiting in teeming rain to reach Mrs Merkel’s promised land. Wrapped in see-through charity macs, they queue excitedly for soup. Most have travelled for weeks, from Turkey by boat to Greece, then via Macedonia, Serbia and Croatia to Austria.
‘We are nearly there,’ says Arun Ari, 27, grinning. He comes from the Syrian town of Kobane, where Kurdish fighters have been battling Islamic State for two years.
He seems a deserving refugee among so many who are not, yet won’t show me his identity papers.
Deserving or not, he faces a tough future. Arun will be processed in one of the camps set up all over Germany in former military bases, school gymnasiums, sports halls, even a former monastery. Yet, just like him, almost every male migrant I meet is optimistic.
Outside the Bayernkaserne camp, for instance, I meet Ali, who arrived eight days ago via Greece. He used to be a travel agent in Lahore, the cultural capital of Pakistan. 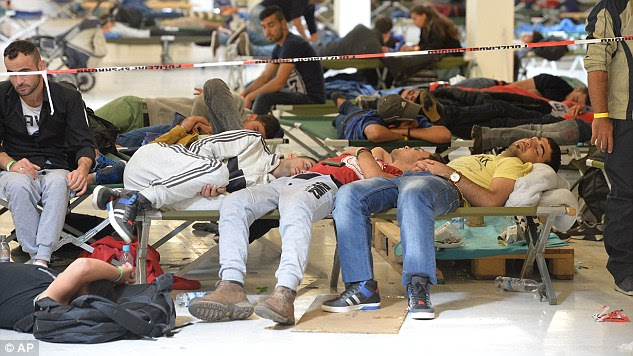 +13
The greater number of asylum seekers reaching Europe, many on flimsy dinghies crossing the Mediterranean or on hazardous journeys hidden in trucks, are from Syria or Iraq 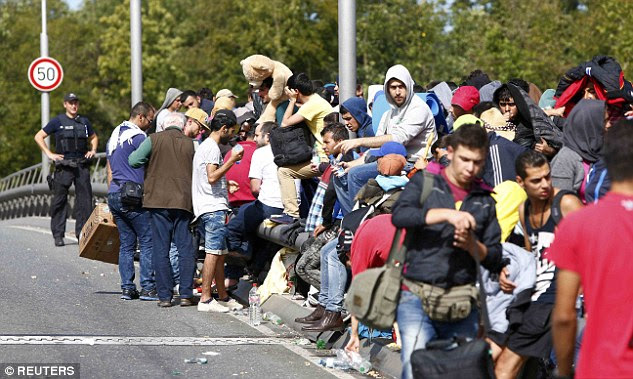